If he was being honest, Utagai Karuta had not really thought about life after completing his revenge against the Problem Solvers. Or more accurately, he had never really had a clear vision of actually pulling that off. He had assumed they would either be killed along the way, or complete their revenge, protect the tropical cave containing Kazamuki Gekiha and the others from discovery, and then be captured by government pursuit leading to either their execution or a simple assassination without a trial.

Also, he had lost a lot of blood after being stabbed in the side.

Crystal Magic could heal even the deepest wounds in 30 seconds as long as they were not fatal. However, he had scattered crystal fragments in London, Northern Europe, and America. It should have been about time someone tracked them down, surrounded them, and captured them.

But that was not what happened.

The world was apparently a lot more colorful than they had thought.

He woke up to find himself in what was obviously the finest medical facility of an advanced nation. The wound itself would have closed up thanks to his Crystal Magic, but the extreme exhaustion was a different matter. The blood transfusion was a huge help.

There were no bars on the windows and the door was sitting open.

This was not how an international terrorist would be treated.

Of course, they were not terrorists.

“Welcome, our new world’s strongests. That title has been granted to the three of you. Or the four of you, I suppose,” said a large man in sunglasses and a black suit who looked like he had stepped out of a movie. The nondescript outfit actually made it stand out like a uniform. “This information has yet to be released to avoid unnecessary confusion, but the official announcement should come soon once international public opinion has been properly gauged. The old age has ended and the next has arrived. Instead of the five Problem Solvers, it is you four Crystal Magicians who bear the title of world’s strongest.”

“Everyone is sure to look up to the four new world’s strongests and your Crystal Magic will surely spread across the world in record time. Mr. Utagai Karuta, we do not know how common your entirely independent version is. You may be the only one in the world or more and more might pop up all around you. If that does happen, you might see those pale girls accepted as your neighbors at school and in the office. The world will look like an entirely different place. Much like how the Problem Solvers were so popular on TV.”

“What are you trying to do?”

“Nothing at all. All we do is position ourselves with the world’s strongest and adjust to match the current age where they reign supreme. All so we can one day create an age where we must not tremble in fear of the Threat.”

“But that will cause problems for a lot of people, won’t it? I don’t know what country you’re an agent for, but a bunch of governments are going to collapse after this, right? In fact, some entire countries might collapse before the next government can rise up. The world was entirely reliant on the Problem Solvers, both for the morale boost they provided and for the physical infrastructure they created.”

“Perhaps so.” The man in black shrugged. “But what does that matter?”

Some feeling Karuta could not identify crawled along his spine as he lay in the bed.

“Garbage disposal, power, industry, food, and the military. The global infrastructure in those fields collapsing will indeed bring chaos, but the human race will return to its natural state. There will be some changes, but it will settle down with time. Complain though they will, people have no choice but to adjust to the new age.”

“There were once many countries and many civilizations out there, but most of them fell. Nevertheless, humanity as a whole remains intact. Even now, as we are exposed to the Threat. So why must we try to stop the natural way of things at this point?”

He was different from the still-unseen Threat and from the group of five centered around Anastasia Blast.

There was something stranger and nastier about him.

He supported the world’s strongest so he could use them to his own ends and reap the benefits.

He was a part of some deep, deep darkness.

“Please take good care of yourself, Mr. Utagai Karuta. We long for the new world you will bring us as the world’s strongest. We long for it more than anyone else.”

That was all the large man in black said before setting a fruit basket on the side table.

He said one last thing as he left.

“The Problem Solvers are gone, so are you going to announce what happened there too?”

“How can we tell the tale of the new world’s strongests if we do not? As those Crystal Blossoms spread across the world, we might just consider commissioning a second ship. Especially since your missing friends will one day reawaken. Of course, this is only if you wish for it.”

“How much do you people know?”

“About that lovely blue cave in Southeast Asia? Let’s just say that we probably know more than you do. Yes, you should probably ask Student Council President Omotesandou for details there. Those people should recover much sooner than you expect, so a second ship probably will be necessary to have a place for them. And to advertise your tale of bravery.”

With that, he looked back from the wide hospital room’s door.

The corners of his lips were curled into a smile below the sunglasses that hid his emotions.

“Of course, any and all announcements will omit our involvement as they always do.”

Karuta could not chase after the man right now.

And he was supposed to be the world’s strongest?

“I am sorry about what happened at Grimnoah. We were scared.”

They were scared, but of what? He had initially assumed she meant the Threat or of Crystal Magicians like him getting in their way, but she may have been referring to something else entirely.

He clenched his teeth while connected to the medical devices around the bed, but then some familiar girls came to visit him.

One was his curly twintails childhood friend, Amaashi Marika.

The other was the Student Council President in a wheelchair, Omotesandou Kyouka.

Now that Utagai Karuta was with them, the new world’s strongests had been gathered.

“I’ve heard. We definitely had to defeat the Problem Solvers, but someone else out there set the stage for it all. And they must have been snickering to themselves while watching our school sink to the bottom of the ocean.”

“Are you saying what I think you are, Karuta-kun?”

“I am, Omotesandou-san. Our revenge isn’t over quite yet.”

That man had mentioned a second ship.

He had said they would need a place for Kazamuki Gekiha and the others who would wake up unexpectedly soon.

What had happened to the Problem Solvers who had used God-Worshiping Magic as the world’s strongest?

He knew that better than anyone.

If Karuta’s group followed this path, they would eventually be made helpless and meet the same fate. Yet if they left this path without a goal in mind, only ruin awaited them.

The only way out required strength.

They needed much, much more strength if they were to arrive at a happy ending that no one had thought of before.

“Power up,” he muttered under his breath.

A pale girl crawled out from the stomach of his surgical gown.

That mysterious crystal girl was not found in any known mythology or religion.

“Unit ID Name: Aine – power up complete. What are your orders, Sacri-sama?”

He slowly inhaled and exhaled.

Their position would change from here on. They would begin their lives as rulers instead of challengers. That gave them a lot more freedom.

The Problem Solvers had once stood before them like an insurmountable wall. 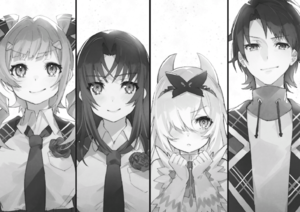 He may have glimpsed a true evil that even those five had been helpless to resist.

So he spoke the powerful words that answered the question asked by the crystal girl who was quietly tilting her head awaiting orders.

“Our revenge continues, so come with me.”

They would remain running through the darkness instead of in the light.

The world’s strongest could easily be swept aside and thrown out, so they were not about to stop here.