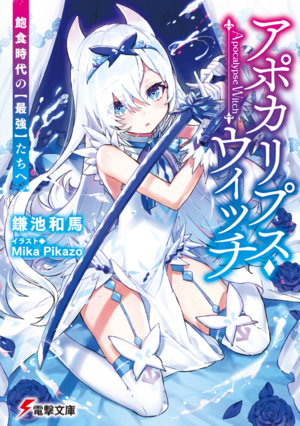 The Apocalypse Witch: To the Strongests of an Age of Plenty series is also available in the following languages:

New magic and old magic. A school battle fantasy over the title of strongest begins here! Crystal magic is the cutting edge of magical technology. Covering one’s entire body with crystal flower armor can produce a variety of supernatural phenomena. But due to a mistake, Utagai Karuta did not receive that special armor and instead receives power by summoning the obedient crystal girl Aine.
“Sacrifice-sama, how long are you going to tease me? I’m going to enter a rebellious phase at this rate.”
“That isn’t how rebellious phases are supposed to work.”
But at ocean-top Crystal Magic Academy Grimoire, where Karuta and everyone learn crystal magic, an upperclassman from the previous generation has been called in as a guest. That user of god-worshiping magic is known as the world’s strongest, and they step up onto the podium and speak to the entire student body. This begins a clash between the forces of new magic and old magic.
“Every last one of you is incompetent. Thus, Grimoire will be shut down.”

Apocalypse Witch: To the Strongests of an Age of Plenty (Full Text)[edit]

Apocalypse Witch 2: To the Strongests of an Age of Plenty (Full Text)[edit]

Apocalypse Witch 3: To the Strongests of an Age of Plenty (Full Text)[edit]