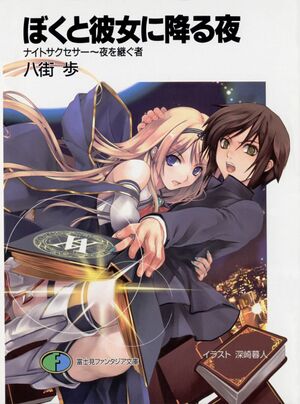 Boku to Kanojo ni Furu Yoru (ぼくと彼女に降る夜) is a light novel series written by Yachimata Ayumu (八街 歩) and illustrated by Misaki Kurehito (深崎暮人). This was published by Fujimishobo and has now ended with 9 volumes.

Sugamu Naito is just your average schoolboy. However, his life was changed when he was dragged into a battle between magicians called Makai Jutsushi. Naito was saved by a Makai Juutsushi girl, Yoruyomiru. His meeting with her shook his lost memories. Now that he knows the existence of dark world, he was moved by something that was inside of him, and took a step into battle...

Those who wish to contribute are asked to first discuss it/to notify the staff in the forum, and to register which chapters they're working on (see the Guideline page for usage rules).

Every Chapter (after editing) must conform to the General Format/Style Guideline and maintain the same terminology used. Editors are to check the standard if possible. Both translators and editors are required to participate actively in the forum in project standards.

If you enjoyed the teaser, why don't you tell us in the Feedback Thread

Volume 1 Night Successor - Those Who Succeed the Night[edit]