Final Chapter: Another Meeting of Love[edit]

Amon wore a black jacket, black pants, and a black hat he did not usually wear as he walked through Scotland Yard’s main entrance. At a glance, he looked no different than normal because he had Overlossed his wings so they would not get in the way.

However, something was different. Unlike before, his overall atmosphere was not so holed up inside.

He walked straight forward without looking around. The stairs down to the underground storerooms were located at the end of the hall straight ahead from the entrance.

His pace was quick.

The people inside called out to him when they saw him, but he ignored all of them.

He walked directly down the stairs and into Flandre’s room.

Two people turned toward him.

One of them was Flandre and the other was smiling.

After all, the Klausl he saw was the one he knew.

She asked him a question with her eyes closed.

“Would you like some tea? Or would you prefer coffee?”

Once she mentioned it, he noticed the scent of tea. They must have been on a break.

As Amon stared blankly, Flandre elbowed him in the side and spoke to Klausl.

“Could you get him some tea?”

Klausl turned around and walked to the simple kitchen in the back of the room.

Flandre watched her leave, sighed, and sat in a nearby chair. Finally, he slowly looked up at Amon.

“I fixed her. It used up all of my spare parts, though.”

Amon’s voice was weak and he forced a small smile. Even he could tell that it was an oddly stiff and pathetic smile.

He lowered his hat to hide his expression.

“Does she not remember me?”

“Her personality and her growth were engraved in that gear…but her memories were kept in her head. …Her head and everything else were completely crushed. I checked after the fact.”

“Then that’s that, I suppose,” he said as if consoling Flandre.

He lowered his hat further to hide more of his face and said something else.

“I was thinking about letting her out into the city instead of keeping her in the Yard. Should I give her to you?”

The mouth peeking out from below Amon’s hat was smiling.

“Don’t try to comfort me. Besides, she’s not a thing you can just give away.”

Flandre finally smiled a bit at that.

“Father, what has you so happy?”

Klausl approached with a tray carrying a teapot and cups and she sounded happy too.

Flandre turned toward her.

“Well, this young one praised you saying you’re just like a human.”

Her cheeks grew red and she smiled. She then turned her back to hide her embarrassment.

She quickly placed the tray on a nearby table.

“Are you from Scotland Yard?”

“He’s a friend of mine,” added Flandre.

“Is that so? Then I look forward to your future visits.”

She turned toward him with the usual expression Amon knew, but her ears were still red.

There was a hint of testing in that name, but Klausl’s expression remained unchanged.

She pointed at the teacup behind her.

With that said, she stepped away.

He nodded silently and slowly moved over with his hat still pulled low. He walked right in front of her.

The two of them grew closer and were finally within arm’s reach.

Suddenly, Klausl turned toward him.

“Is something the matter?”

“You look troubled by something.”

He sighed at that and there was some self-deprecation mixed in.

“I’m thinking about saying some suitable words to a certain girl, but I end up trying to say something she wouldn’t know about.”

She smiled at what he said.

And she spoke her own words without knowing what he was talking about.

“At times like that, I think you should say whatever would make her happiest.”

He smiled bitterly and reached for the teacup on the table.

He forced his gaze down to keep himself from looking at Klausl.

Due to that, his hat gave in to its deep angle and spilled from his head.

Before he could reach down, Klausl picked it up.

He took the hat and said a single word.

She raised her head and her soft-looking blonde hair swayed.

In that instant, Amon looked at her face and was left speechless.

Flandre stood up so fast he knocked over his chair.

Klausl only noticed once she saw how the two men were acting.

She frantically brought her white hand to her cheek.

She brought her other hand to her other cheek and more tears flowed from between her closed eyelids and wet her hands.

“Huh? Isn’t this strange? I don’t know why, but this naturally happened when I heard what Mr. Amon said. …How odd. I have this weird feeling that I can’t seem to remember or forget.”

Amon sounded troubled and like he was trying to convince himself.

“And isn’t this enough?”

She had no idea what he meant, but she still shook her head.

“I don’t know why I’m crying, but I do know one thing for sure.”

She spoke while shedding more tears.

Amon gasped with an indescribable expression on his face.

A moment later, his hand reflexively yet hesitantly touched her cheek.

She let out a quiet voice as he wiped away her tears.

Her closed eyelids shook a bit and then moved. It was a frustratingly slow movement that seemed almost afraid of something and like she did not know how much strength to use.

He spoke the words she had once said to him.

“It’ll be okay. You can see. After all, I can already see your eyes.” 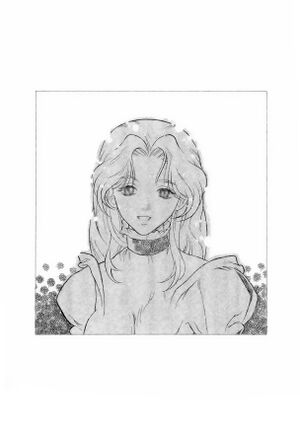 She nodded and opened her eyes.

Amon looked her right in the eye.

And her eyes looked back at his.

No one said a word.

Her blue eyes were wet with tears as they looked at Amon.

The eyes wavered from their first contact with light, they were an incredibly deep blue, and Amon was reflected in the few remaining tears.

The blue of her eyes somehow resembled the color of the sky everyone could see overhead.