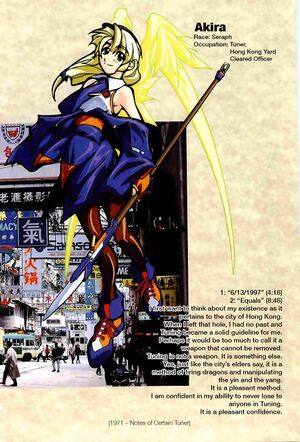 I first want to think about my existence as it pertains to the city of Hong Kong.

When I left that hole, I had no past and Tuning became a solid guideline for me.

Perhaps it would be too much to call it a weapon that cannot be removed.

Tuning is not a weapon. It is something else. Yes, just like the city’s elders say, it is a method of firing dragons and manipulating the yin and the yang.

It is a pleasant method.

I am confident in my ability to never lose to anyone in Tuning.

It is a pleasant confidence. 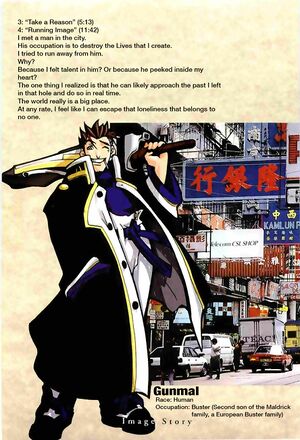 I met a man in the city.

His occupation is to destroy the Lives that I create.

I tried to run away from him.

Because I felt talent in him? Or because he peeked inside my heart?

The one thing I realized is that he can likely approach the past I left in that hole and do so in real time.

The world really is a big place.

At any rate, I feel like I can escape that loneliness that belongs to no one. 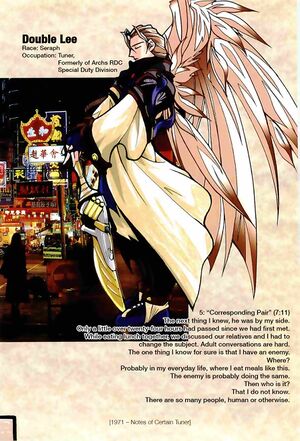 The next thing I knew, he was by my side.

Only a little over twenty-four hours had passed since we had first met.

While eating lunch together, we discussed our relatives and I had to change the subject. Adult conversations are hard.

The one thing I know for sure is that I have an enemy.

Probably in my everyday life, where I eat meals like this.

The enemy is probably doing the same.

Then who is it?

That I do not know.

There are so many people, human or otherwise. 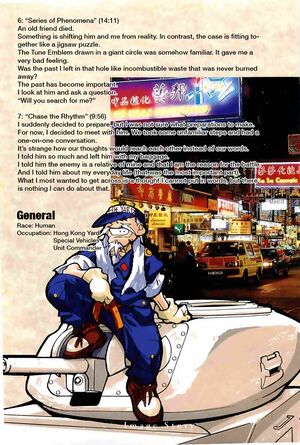 Something is shifting him and me from reality. In contrast, the case is fitting together like a jigsaw puzzle.

The Tune Emblem drawn in a giant circle was somehow familiar. It gave me a very bad feeling.

Was the past I left in that hole like incombustible waste that was never burned away?

The past has become important.

I look at him and ask a question.

“Will you search for me?”

I suddenly decided to prepare, but I was not sure what preparations to make.

For now, I decided to meet with him. We took some unfamiliar steps and had a one-on-one conversation.

It’s strange how our thoughts would reach each other instead of our words.

I told him so much and left him with my baggage.

I told him the enemy is a relative of mine and that I am the reason for the battle.

And I told him about my everyday life (that was the most important part).

What I most wanted to get across is a thought I cannot put in words, but there is nothing I can do about that. 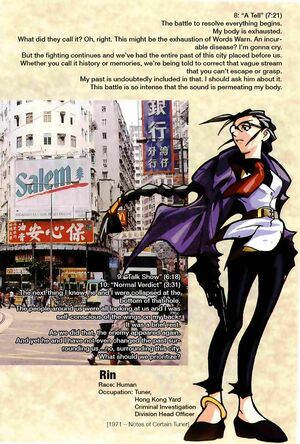 The battle to resolve everything begins.

My body is exhausted.

What did they call it? Oh, right. This might be the exhaustion of Words Warn. An incurable disease? I’m gonna cry.

But the fighting continues and we’ve had the entire past of this city placed before us.

Whether you call it history or memories, we’re being told to correct that vague stream that you can’t escape or grasp.

My past is undoubtedly included in that. I should ask him about it.

This battle is so intense that the sound is permeating my body.

The next thing I knew, he and I were collapsed at the bottom of that hole.

The people around us were all looking at us and I was self-conscious of the wings on my back.

It was a brief rest.

As we did that, the enemy appeared again.

And yet he and I have not even changed the past surrounding us…no, surrounding this city.

What should we prioritize? 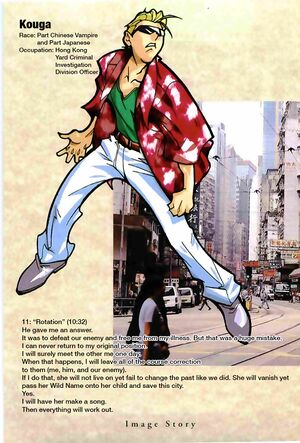 He gave me an answer.

It was to defeat our enemy and free me from my illness. But that was a huge mistake.

I can never return to my original position.

I will surely meet the other me one day.

When that happens, I will leave all of the course correction to them (me, him, and our enemy).

If I do that, she will not live on yet fail to change the past like we did. She will vanish yet pass her Wild Name onto her child and save this city.

I will have her make a song.

Then everything will work out. 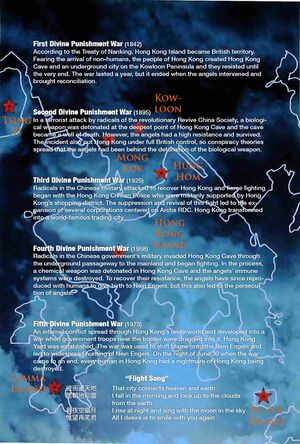 According to the Treaty of Nanking, Hong Kong Island became British territory. Fearing the arrival of non-humans, the people of Hong Kong created Hong Kong Cave and an underground city on the Kowloon Peninsula and they resisted until the very end. The war lasted a year, but it ended when the angels intervened and brought reconciliation.

In a terrorist attack by radicals of the revolutionary Revive China Society, a biological weapon was detonated at the deepest point of Hong Kong Cave and the cave became a well of death. However, the angels had a high resistance and survived. The incident also put Hong Kong under full British control, so conspiracy theories spread that the angels had been behind the detonation of the biological weapon.

Radicals in the Chinese military attacked to recover Hong Kong and fierce fighting began with the Hong Kong Civilian Police who were militarily supported by Hong Kong’s shopping district. The suppression and revival of this fight led to the expansion of several corporations centered on Archs RDC. Hong Kong transformed into a world-famous trading city.

Radicals in the Chinese government’s military invaded Hong Kong Cave through the underground passageway to the mainland and began fighting. In the process, a chemical weapon was detonated in Hong Kong Cave and the angels’ immune systems were destroyed. To recover their resistance, the angels have since reproduced with humans to give birth to Nein Engels, but this also led to the persecution of angels.

An internal conflict spread through Hong Kong’s underworld and developed into a war when government troops near the border were dragged into it. Hong Kong Yard was established. The war was used to shift blame onto the Nein Engels and led to widespread hunting of Nein Engels. On the night of June 30 when the war came to an end, every human in Hong Kong had a nightmare of Hong Kong being destroyed.

惟望再笑君 All I desire is to smile with you again