God, is it cold. I forgot to write the afterword, so I’m writing it at the office now.

But it really is cold. It’ll be March by the time this book comes out and it’ll probably be warm then, but then I’ll have to deal with allergies. I’m not looking forward to that.

But this is no time to be complaining.

First, the machine I was writing the manuscript on died. Then when I tried to rely on the backup I had secretly sent to the office, that machine died too. I really thought I was going to die as well when that happened.

Now, a phone call. (I’m not using the office phone without permission, am I?)

“Oh, you finished that thing? Then…”

“How many is this for the City Series?”

“Stop making tricky lies like that. I know it’s only 4.”

“If you know the answer, then don’t ask.”

“Hmm. So did you sneak in some lewd scenes again?”

“I see. Then is there a blond girl this time too?”

“Does someone get slapped?”

“What about a maid?”

“There haven’t been any of those!”

“Then…then how is this a proper entry in the City Series!?”

Dammit, what does he think this series is?

Don’t any of you grow up to be like that, okay?

Anyway, I wrote everything I wanted to this time. I’m satisfied. As a writer, I am truly blessed to be able to write as much as I want like this.

It’s thanks to all of you. Thank you.

Now to change the subject.

I’ve heard a variety of opinions and there seem to be three different ways to read my novels:

2. For a theory on victory and defeat and on the journey leading to them.

Which one did this one work as? I threw in everything I wanted to say.

And with that, I’m reading back through Part B while listening to Reimy’s Two of Us. (I can’t think of a better image song for Yuuki…even if it is a pretty minor song.) But…

“Who was the strongest of all?”

I really don’t change, do I?

Now, then. Next up is Paris.

Late December 1998. A morning stuck at the office. 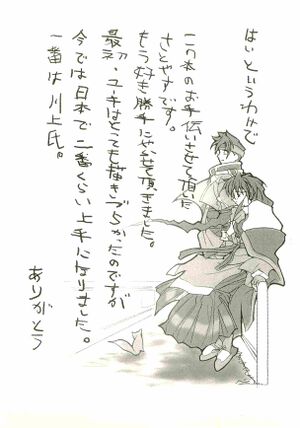 This is Satoyasu who helped with this book.

I was able to just do whatever it was I wanted.

At first, Yuuki was really hard to draw, but now I’m the second best in Japan at it.

Kawakami is the best at it.