Anyway, we ran a survey after Osaka, and the readers basically said, “Kawakami-san has been really lewd lately. Is he okay? Did he have a bad experience or something? Really, what’s going on?”

I want to know what’s going on too, honestly.

Anyway, let’s switch things up by starting on a more serious topic.

With Paris, I feel like you’ve gotten a pretty good look at what the City Series is as a whole.

With those 5 titles, I’ve managed to show off the basic structure of the world (not fully, though).

From here on, I plan to expand on the world a lot, so I’ll be looking at the future books as a sort of “second season”.

Think of it like having the groundwork laid out to start making a leap ahead in whatever direction I want.

So I guess you could say I have finally drawn out a visible starting line, thin though it may be.

As an author, I would describe this feeling like soaking in a really nice warm bath. (I don’t expect anyone at all to get what I mean from that.)

A big thank you to everyone who has supported me this far. I’m going to keep things exciting as I continue onward.

And to make things more interesting, I’ll call directly from the office. (I’m in a weird mood today.)

“Hey, K-kun. What are your thoughts on Paris?”

“Oh, Senpai. You really like the sexy stuff, don’t you?”

“A whole bunch of people say so.”

“Every member of the human race other than me is a liar, so you can’t trust a thing they say.”

“Of course. Everything you say is the opposite of true, so think carefully before you speak.”

“That is an unnecessarily complicated gag!!”

Damn, is everyone I know weird?

So with that (with what?), the City Series is about to really get started.

Anyway, my background music this time was, as announced last time, from a video game. I think Say Papa by Zuntata would be good for the final chapter.

While rereading Part B, I was wondering “Who was the most selfish?”

And this definitely had the usual City Series feel to it, didn’t it? 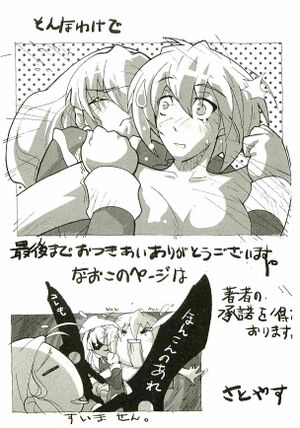 Top: And with that…

Thank you for seeing it through to the end. I got permission from the author for this page.

Left sword: This One Too