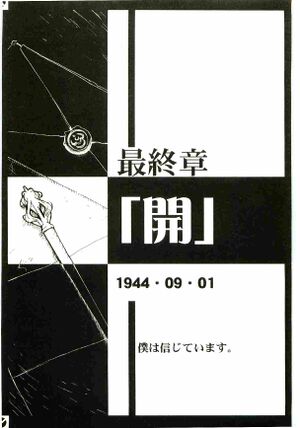 The current time is 8:27 AM. I am still alive in a room at Autun’s general hospital.

When I woke up yesterday and checked my calendar, I was shocked to see the time of the Primitif had already passed. It had not reset to September of ’43.

The Rondeau has been broken. And without anyone noticing.

Everything outside of France has been reverted and linked to August 6, 1944 – which I guess counts as a Primitif for the outside world.

France had no Primitif, it has been returned to its original time period, and it has reconnected to the rest of the world.

Only a few people besides me are aware of this.

The sun is shining outside. I wonder what those two girls are doing in that light. They haven’t contacted me, but I hope they are doing well. I learned yesterday that the Germans fully surrendered in Paris on the 24th and the people view those two as heroes, but they still returned to the front line to rescue a friend from being transported to a German concentration camp.

The newspapers say Paris was liberated and the rest of France followed suit, but no one has noticed the other liberation that occurred behind the scenes.

But I know. France was truly liberated. From here on, World War Two will pass through France and pour into Germany.

An uncharted future now awaits us.

There is nothing more for me to do. I had the nerve to act like a prophet, but once I woke up yesterday, the mayor was there by my side and he immediately yelled at me for what I did. And the rest of the village see me as a perfect target of gossip.

Maybe that’s just how it is.

But one thing does sadden me: My true daughter must no longer exist. France’s liberation required her erasure as payment.

I think I will read his letter now. The one my daughter left with her other self.

<Just then, the door to my hospital room opens and a girl walks in. She brushes back her brown hair.

“Hi, mom. I don’t know what in the world is going on, but US Intelligence sent me a notice that my mission was canceled and it was dated last year for some reason, I received a letter saying to come here from someone with my exact name, and everyone in the village is acting like they know me? Could you explain all this to me to make up for not seeing me for 14 years?”

I have not seen her for 14 years, yet I remember that assertive look on her face like it was yesterday.>

I don’t think I need any of the introductory formalities here.

If it does come in handy, that must mean I failed to complete my fight. Then this letter will be the only thing to bring back together the liveliest women I have ever known by clearing up all the misunderstandings.

Rose, I plan to go visit you soon.

There is something I must tell you: we have two daughters.

One is Beretta who has currently gone to the beach to have some fun.

The other is a girl who has yet to fully become our daughter.

She is currently staying with a good friend of ours. If I complete my fight, then I plan to raise her along with that friend.

You do not know her, but you should understand once you meet her. She has inherited your name and your will, so she might as well be Beretta’s big sister. I am certain you will know what I mean once you meet her.

I must tell you about that and that Beretta is growing up big and strong.

If the world ever finds true peace or if my fight here proves to be no more than a misunderstanding, then I will go see you and eventually bring our two daughters to you.

I am sure they will both choose to call you their mother.

So first, I want to see you.

What are you doing now? I heard from a friend that you returned to your hometown in Bourgogne after leaving Paris. I know you are there, so I don’t have to worry about your past or where you have gone.

I hope that you can remain true to yourself there.

Are you staying true to yourself by being the Rose Francisca who always works to help others?

I hope you are.

And I hope our two daughters can as well.

I hope they can fight for someone else’s sake always and forevermore.

And that they will never feel the need to suppress who they are.

I believe they can grow up to be someone who only thinks about bringing happiness to all and never has to think about hurting anyone.

Rose, can you believe in them and support them? I want to meet you and discuss our future. So I will gather my luggage and pay you a visit.

I swear I will. 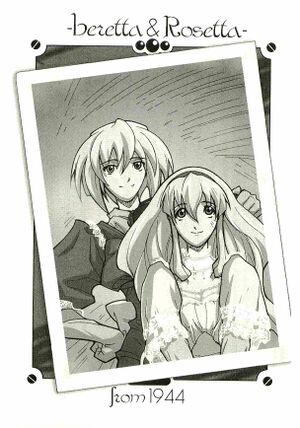 The rest, as they say, is history, so reference your history books for what happens next.

This is not the place to explain what destiny awaited them after that. But I will say that the Missel family did not die out and a certain Belle de Marionnette factory in San Francisco remains in business.

They rescued me from a train headed for Auschwitz, so I was able to see the end of the war. The Protected Empress and Grazie vanished somewhere in history afterwards, but none of us ever forgot what they did for us. Let us look at one section of the Lourd de Écrivain song:

“So that no one would grieve again.

“That which is endless and cannot be grasped.

“That which is vast and cannot be held.

One of the documents I have gathered is a photograph of those two girls wearing the dresses they tried on at a boutique. This proves they did indeed exist. It might not be a bad idea to Signe here that the alternate history described here was indeed real and the world was indeed remade.

-Mallette Harculia, Representative of the Perdus Artifice Compilation Editing Committee from the Modern Division of the French Royal Historical Society