Someone once gave me a suggestion.

“I think it’s about time you wrote a City novel for beginners. In fact, just do it.”

I responded like I was a high school girl. (Well, a bad and outdated imitation of one.)

“Yeah, so, like, Berlin or whatever? That sounds hella rad.”

“Never do that again. So will you consider writing one? By which I mean, go write one.”

And so now we have Berlin as the start of the series’ second season.

Since this is the 1st City, I wanted to make sure you could start reading here, so I included explainers for the important terminology and went with brand new characters. In general, I guess I wanted this to be a version of the City Series you could just pick up and read. (I got less and less confident about that as I was writing it.)

Also, the world of the City Series is based on the idea that “anything goes”, so it has some unique aspects that differ from the real world and its history. Please keep that in mind.

This story follows the hidden side of a Berlin that exists in something like a fairy tale world.

So anyway, this is the beginning of the second season. It feels like it took me forever to reach this point, but it’s thanks to all of your support. Thank you so much.

“It’s finally your turn, H-kun. If there’s anything you want to say, then say it.”

“Okay, then what’s with the 8-year age gap? Doing lewd things with a 15-year-old girl is a bit much even for me.”

“Nothing like that is going to happen. I’m not writing this in my usual way…I think.”

“Can we just move away from that topic please?”

“Hmph, fine. T filled this section with jokes, so got any good ones?”

“Okay, see you next week. Thanks for your time.”

“Wow, that was a really forced way to end this. I’m impressed.”

Let’s forget all about that by providing a few URLs to the cutting-edge internet. (Well, maybe it’s not so cutting edge anymore.)

My site is generally where I’ll put any information about City or post random thoughts or ideas, so stop by if you feel like it.

Beethoven’s Symphony No. 5 (the fourth movement is really exhilarating, isn’t it?) might make for good background music this time. Performed by the Berlin Phil if I I’m being greedy.

And with that, I’ll think on this question:

“Whose answer was found?”

Okay, the next one will be Berlin again.

February 2000. A morning exploding in allergies. 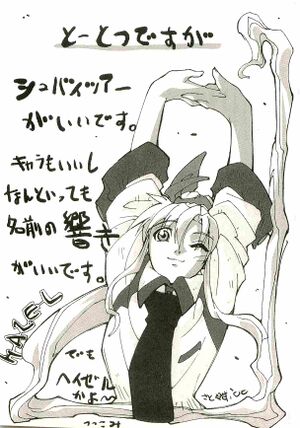 Is that really how you pronounce Hazel? Weird.