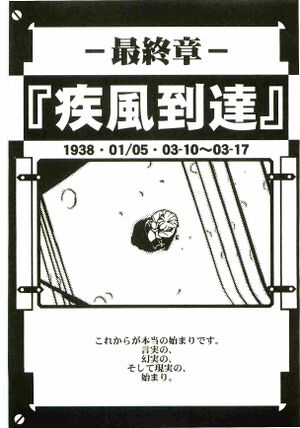 The true beginning is yet to come.

The beginning of the words

And of the reality 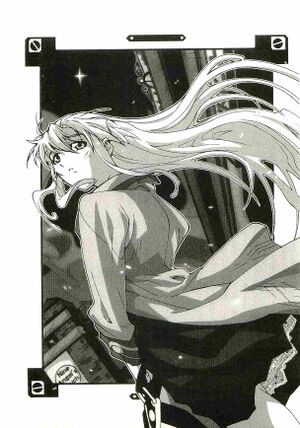 Starlight fell on a chilly night.

Her hair was groomed, she wore a shirt, skirt, and coat, and she held a travel bag.

She silently viewed her surroundings. The large roundabout was cold and deserted and the shopping district across the road was entirely dark. The clock on the roof of the 2-story station building told her it was currently 3:10 in the morning.

No trains were running at this hour.

She stood alone, waiting for someone.

She suddenly pulled a letter from her pocket.

“So it’s been about 2 hours since I was dumped across the border with some money and this guide.”

Her right eye still had a scar on the eyelid, but there was a blue human eye within.

The blue eye did not dilate as she focused on things. She could not actually see with it.

But she turned both eyes toward the station’s clock and silently watched it.

The long hand had just moved.

She hesitated for a moment.

Just then, a car drove up the road in front of the station. She did not recognize it, but her expression changed when she saw the driver through the windshield.

Joy filled her face, but she lowered her head long enough to erase that and then looked up again.

After another pause, she no longer hesitated to smile.

She began walking instead of just waiting for the car to approach.

The wind suddenly blew as if to accompany her.

It was a powerful gust that rattled the station’s windows.

The wind brushed across her cheek as it roared by.

She knew the name of that powerful wind surrounding her.

She spoke that word and stopped walking.

Her skirt fluttered and she turned around to look up into the night sky.

She saw the north star shining at the peak of the northern sky.

The car came to a stop behind her.

She heard the door open and close, but she did not look back. She continued staring up into the northern sky.

A deep and familiar male voice reached her from behind.

He spoke to her and slowly – almost cautiously – hugged her from behind, but still she did not turn around.

She only looked up into the night sky.

She stared and stared.

The voice behind her guessed the reason why.

She did not answer that question, but there were tears running down her face. But only from her right blue eye.

She dropped her bag and tearfully raised her voice while still looking into the sky.

“The Wind is blowing!”

Her tears would not stop.

She cried on and on in the blowing wind while staring at the north star.

Tears fell from her right eye as she told herself she would eventually travel there again. 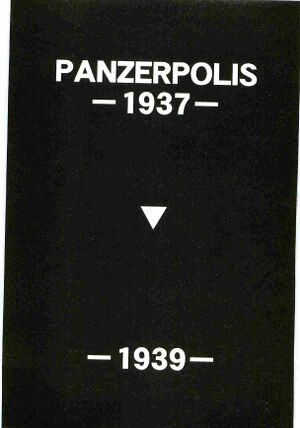 The German government declared itself to be the Greater Germanic Reich and swore it would develop the nation without allowing any foreign interference.

The Panzerpolis Project was also revealed then and a fixation of pure blood spread quickly throughout the German people. However, that project was no mere symbol and its details were widely spread by the schools and other public institutions.

Meanwhile, the Geheimnis Agency remained hidden and it was all carried out as a national project led by the government.

Thus began the answer that binds humanity, steel, and even time.