Someone once said this to me:

Okay, sorry. That’s a lie. No one said that. I’m in a bit of a mood due to lack of sleep, but I also feel like that’s always the case, so let’s just go with it. (Am I making any sense?)

Anyway, I somehow got Berlin 2 written.

This is my 10th book. But they say you should have 10 titles under your belt if you want to call yourself an author, so I think I’m going to keep working at it.

This one was set in Germany just before the war begins and it follows Hazel and Berger learning more after the past volume’s 1937 and teasing, cajoling, sleeping next to, and slapping the other while they pursue an incident related to the Panzerpolis Project.

I will write more about those two in the future. They are the City Series’ first multi-work protagonists. I’m considering writing their story all the way through the incident in ’43, so I hope you will continue reading if I do. I’ve gotten pretty selfish when it comes to the illustrations and such, but that’s thanks to all of your support. Thank you so much.

Now for the usual phone call with a friend.

“Okay, it’s your turn again, H-kun. If you missed out on saying something last time, now’s your chance. Although we’re doing this over email, so it’s not really a conversation.”

“What, you’re chickening out of doing the 8-year age gap? You’re just gonna tease us and then yank it away from us? I read the text, but if you’re going 18+, you need to really go all in, y’know?”

“Sure, sure, sure. Enough talk. Anyway, here’s a sneak peek at the next episode of Berlin-san:

“Stop making stuff up. And stop eating up precious page space with a list. Wait until the next time so the readers can catch up.”

Currently (October 2000), the illustration novel Image City SF, depicting the City world’s San Francisco, is being serialized in Dengeki hp, a novel magazine published seasonally by MediaWorks. You can regularly see City-related visuals there, so if you’re interested and have the time, please check Dengeki hp at the bookstore. (Wait, I didn’t actually tell you to buy it, did I?) That’s what I’ve been working on lately.

My background music this time was Beethoven’s Piano Concerto No. 5, the Emperor Concerto. It fits because of the emperor name, right?

Now, Hazel was teased a lot by the older guys this time, but I was wondering…

“Who wanted to become what?”

Okay, the next one will be Berlin again. 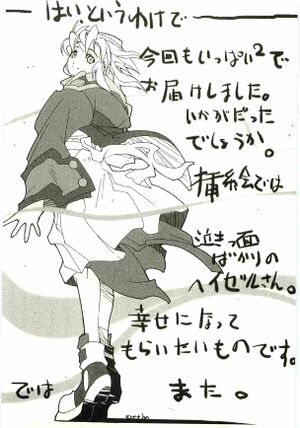 Okay, I sent in so, so many illustrations this time. What did you think of them?

Hazel-san was always crying in the illustrations, so I hope she gets to be happy.