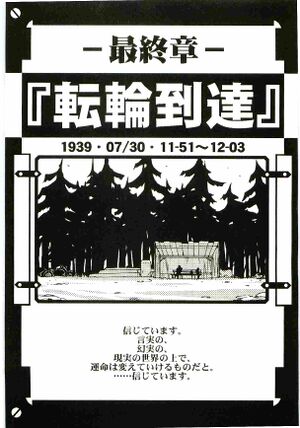 That destiny can change

The sky was clear.

The chilly wind of late summer blew through a mountain forest of green conifers instead of the black ones.

A motorcycle was parked on the side of a road running through that forest. The driver’s seat and the attached sidecar were both vacant.

Two people were inside the small bus stop shelter located a short distance away.

The one in a black coat was Berger and the one in a reddish shirt and skirt was Hazel.

Hazel was hanging her head in slight anger and Berger had his arms crossed. They made no attempt to look each other in the eye, but Berger did speak.

“The bus will be by before long. It’s already running late.”

“Are you still mad?”

“I’m the one who should be mad.” Berger kept a straight face. “Everyone removes their clothes before Write Bringing into a Heavy Barrel – that’s just how it’s done. Yet there you were in the secondary cockpit waiting for me to emerge. You’re a naughty girl, Hazel. Didn’t know you had it in you.”

“I was worried about your injury! Besides, this just makes us even. You’ve already seen me like that.”

“Yeah, but I wasn’t trying to see you naked. You see, I’m not interested in kids.”

“Then, um, what type of girl are you interested in?”

“The type with short blonde hair, a flat chest, and no end to her complaining.”

She thought on that for a few seconds and then pinched his arm hard.

“I’m sure it’s a cheap biological prosthetic, so who cares? You’ll have a better one next time I see you anyway.”

She looked him in the eye and continued in English.

“Do you want to know why I came to see you this time? It has to do with the test tubes you found in my luggage.” Her expression softened and he said nothing, so she continued. “Making a prosthetic that won’t be rejected requires the person’s blood. …I wanted to make you a decent arm as thanks for saving me two years ago. And I helped myself to some of the blood on your coat in the secondary cockpit last night.”

“Give it back. It’s mine. You don’t just take blood from a guy with a divine name.”

“I already mailed it to the US. At that mountain store on the border.”

He held his head in his hands when he heard that.

“Why does this girl never ask first?”

“I’ve been saving up money helping out at a neighborhood library for the past two years. This was supposed to be a surprise gift.”

“Fine, whatever. It’s not like we’re ever going to see each other again.” Berger leaned back in his seat. “I’m a hired gun, but the AIF is going to be using mostly permanent members in Germany. Once war breaks out, I won’t be seeing you.”

“Do you know the requirements for female members?”

She shook her head, so he beckoned her over to lend him her ear.

She silently scooted over and he whispered his answer. Her face immediately grew red.

“See why I never tried to get you to join? Otherwise it would be too psychological taxing if you’re captured and tortured. But…that’s a lot like being asked to get a sex change.”

Then he wiped away the smile and brought a hand to his chin.

“Either way, it’s best if we don’t see each other. …When you appeared to me last night, it created a barrier between us.”

“You still don’t get it, Hazel? You’re one of the people who seek after power and I’m…not. That much I can tell. You can no longer stay with me ‘just because’. And that’s fine. It’s for the best.”

Hazel gasped at what she heard.

…We can’t be together?

Meanwhile, the bus arrived. He started to say something, stopped, and then patted her on the back.

Feeling pushed, she weakly stood and then waited for him to do the same.

With an exasperated sigh, he slowly stood and faced her.

“This is goodbye, Hazel.”

He looked down at her with a wordless smile, which kept her from saying anything either.

Her gaze dropped and she briefly saw her luggage in her hand. The bus was sliding up to the stop.

“D-does everything have to arrive and happen without warning?”

“But…but it’s too sudden. Don’t just assume we’ll never see each other again.” She looked up with the ends of her eyebrows drooping an she asked a hurried question. “U-um, can you tell me one thing?”

“Eh?” she said, but she still obeyed without hesitation.

She was surrounded by silence and darkness.

Suddenly, she felt his fingers on her jaw. His touch brought no fear or revulsion.

She felt an almost relaxing anticipation as he somewhat lifted her face. She opened her lips ever so slightly as if granting an unstated request.

He suddenly pinched both her cheeks and tugged them outwards. They stretched further than she would have thought possible and her eyes shot open.

“Listen, Hazel. I’m only going to say this once, Hazel Mirildorf.”

She dropped her luggage and vigorously nodded.

“You really saved my rear this time. Thanks.”

With that, he let go of her cheeks and then picked her up.

He immediately carried her to the bus and up the stairs before tossing her into a nearby seat.

The next thing she knew, he had rushed off and the bus’s door was closing.

As soon as he gave the command, smoke blew from the bus’s exhaust and it left. Hazel ran over to the window inside.

She opened the window to see the travel bag she had dropped earlier.

She heard his voice from beyond the thrown bag.

“You forgot this! And say hi to Corelle and Pale for me if you see them!”

She caught the bag, lost her balance, tumbled from the seat, and fell onto the bus’s floor.

She struggled to get back up, but soon gave up.

The sky was moving outside the window, so the bus had to be moving already.

Her lips trembled as they formed the question she had asked herself so many times over the past few days.

“Why…why didn’t you abandon me that night?”

And in her mind…

…When we really are saying goodbye, he thanks me.

She held her bag to her chest and hung her head on the wooden floor.

She also felt something tickling her cheeks.

So she looked up, to make sure no further tears fell.

She saw the wind Lives flowing in from the open window.

She reached her hand out. 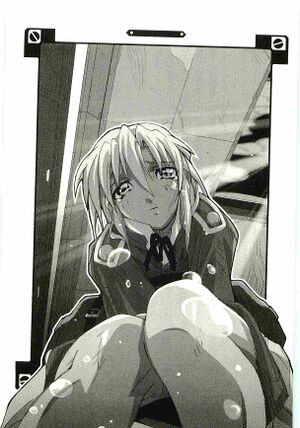 She held the wind and spoke the same thing she had on Schwarz Löwe’s shoulder that night.

“The Messiah travels with Destiny…”

But then she rephrased it, remembering Berger’s Erklärung.

But when she tried to continue with “abandon the Messiah”, her voice faded away and the words would not come.

She could not stop the tears now. More and more of them spilled from her eyes.

She wept, but she looked up.

For some reason, something inside her told her she could endure this.

So she looked up.

She looked into the wind, all alone.

And she told herself this destiny was only temporary.

The AIF’s efforts had somewhat shaken the core of the military, but they could not stop the coming era and the Panzerpolis Project was rapidly completed.

The Geheimnis Agency’s Gard-class composite warship’s reconstruction was completed in late ’40. Germany had been briefly delayed, but with the Vaterlands up and running, the Geheimnis Agency had solidified their national defense and their attempt to conquer Europe was underway. Using blitzkrieg warfare that coordinated man and machine.

It was in that age that man and machine were joined on the battlefield. 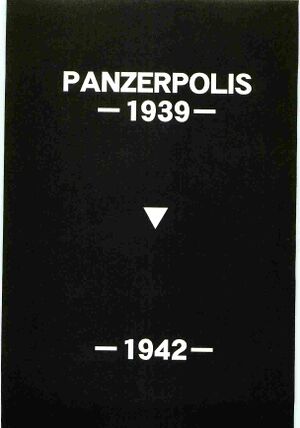