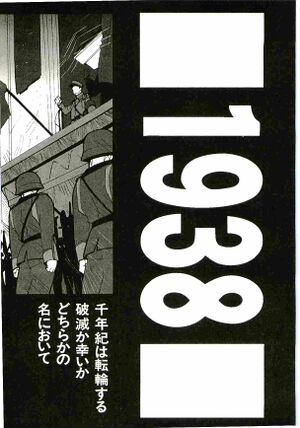 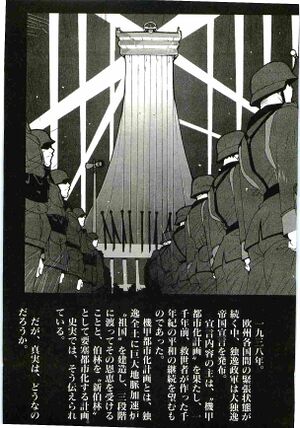 In the name of

Either ruin or happiness

The countries of Europe remain in a state of tension as the German army declares Germany to be the Greater Germanic Reich.

In this declaration, they state their desire to complete the Panzerpolis Project and continue the millennium of peace begun by the Messiah 1000 years before.

The Panzerpolis Project involves the construction of giant Vaterland ley line acceleration reactors all across Germany, receiving the benefits of those reactors over the course of three stages of activation, and transforming Berlin into a fortress city known as Germania.

But who can say how much of that is true. 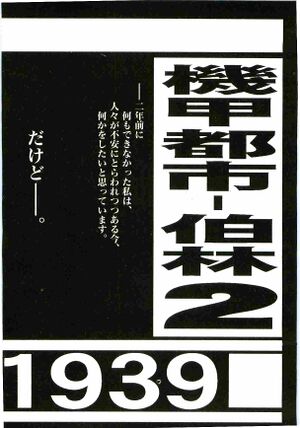 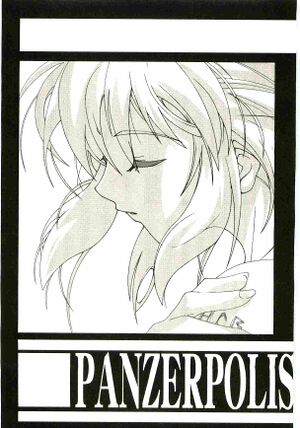 I could not accomplish anything two years ago, but I want to do something now that everyone is plagued with such unease.

“You would be better off remaining on your own path.”

-Words of the musician Ravel when refusing to teach Gershwin 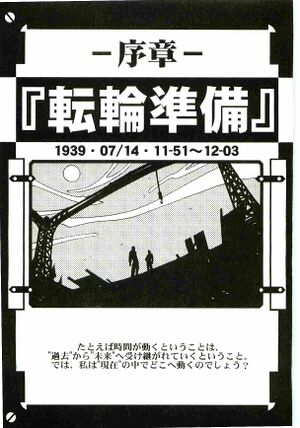 For example, the flow of time

Tells us that the past is being inherited by the future.

Then where is that flow taking me here in the present? 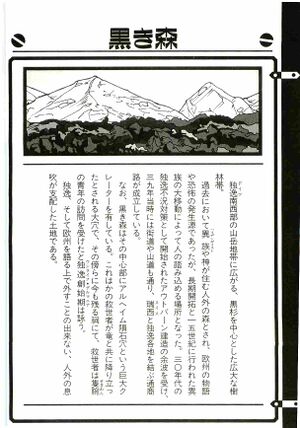 A vast forest of primarily black cedar found in the mountains of southwestern Germany.

Was once known as a nonhuman forest home to Heidengeist and gods and became the source of Europe’s stories and fears, but humans can now enter the forest thanks to long-term development and the mass migration of Heidengeist during the 15th century. It was affected by the construction of the autobahn meant to fight the German depression in the 30s, so by ’39, it has roads and mountain paths and even a trade route connecting Switzerland to different parts of Germany.

A giant crater known as the Alfheim Meteorite Pit exists in the center of the Black Forest. That is said to be where the Messiah descended along with her dragon and the Unreif Germane states that the Messiah was visited by the one-armed youth at the shrine that still remains nearby.

This land ruled by nonhuman life must always be mentioned when speaking of Germany or even Europe as a whole.

There was not a cloud in the blue sky.

The chilly mountain winds unique to southern Germany swept across the black cedar forest below.

The wind rustled through the leaves that had reached a midsummer green so dark they were nearly black.

But as that wind parted the forest, it suddenly blew up into the sky.

The forest had come to an end.

There were two large clearings in the forest.

The first contained an artificial facility stretching about 2 miles from east to west. 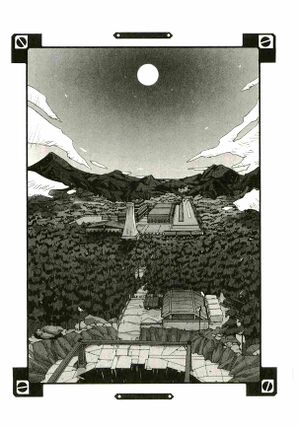 There was a single runway and a few large hangars on the eastern end, an underground airship shipyard in the center, and a white, volcano-shaped tower reaching a height of 120 yards on the western end.

This was a military development base. Shimmering heat left the top of the western tower, distorting the azure sky.

The other large clearing was about a mile to the west of the base. It was a massive crater with a diameter of more than 400 yards.

Despite the diameter, it was not all that deep.

There was an even deeper hole at the center of the rubble.

Unlike the surrounding crater, that hole was wholly artificial.

It was too deep for the light to reach the bottom, but the dark pit had a radius of about 20 yards.

Four winches were suspended overhead and they were constantly pulling dirt and rubble from below.

Two figures stood next to the winch control room built up on the stage.

One was the site commander with his black Geheimnis Agency uniform half removed below the hot summer sun.

The other was the site supervisor wearing a German Army combat engineer uniform.

Both were fairly old and they were discussing the large-print diagram showing the progress of the excavation they had spread out before them.

“For some reason, we can’t get any water,” said the site supervisor while holding the diagram in his dirty gloves. “We have been working at this for two years now, but this is a first. I can only imagine something happened below to shift the flow of water.”

“The acoustic survey discovered a hollow below, didn’t it? Are we sure that isn’t just a coincidental gap in the accumulated rubble like that one from three days ago?”

The site supervisor twisted his square face to the side.

“It’s too soon to say. I mean, the lab that was here was highly unusual. They dug down 200m belowground to expand the place.”

“Because they could excavate high-purity spirit stones from the Alfheim Meteorite Pit. We’re talking so pure that contact with moonlight could trigger an explosion.” The commander suddenly looked up toward the large tower standing above the base beyond the forest. “Which is why our Base #8’s Vaterland can extract the purest Phlogiston in the country. Building that base three years ago was well worth it.”

“I’ve noticed the base works through the night. That shipyard never sleeps. …We were the ones that dug out the land for that and the other 7 shipyards like it, but are you finally building those 70,000ton aerial warships? And eight of them at once at that?”

“I know we have worked together for 3 years now, but that is none of the military’s concern,” said the commander. “Although to be honest, not even I am privy to the details. None of us knows what we will find in here. We only know this is what remains of P. Wagner’s lab.”

“The lab of the guy who started the Berlin Conflict 4 years ago, huh? He sure did a good job of blowing the whole thing up all the way to the very bottom when he escaped. It’s made this dig so tricky we’re already on year two.”

“A site well worth working at, don’t you think?”

“Maybe if we actually find something useful at the bottom” The supervisor sighed. “But we really don’t get what’s going on here. And you’re saying you don’t understand either because the Geheimnis Agency has its own hierarchy?”

“It does. …We’re so close to the HQ here, but paying them a visit would not accomplish anything. You saw his Excellency, General Graham, that one time, didn’t you? His entire body has been replaced with prosthetics and he has lost all his emotions…although that makes him a trustworthy man who never makes mistakes.” The commander sighed too. “Then there’s our leader who gives out prophecies but is always mysteriously absent. Not to mention our missing Messiah.” He looked down at the diagram again. “I leave you in charge here. Keep me informed of your progress and let me know if you require further supplies or if anyone is injured. Today’s morning report is-”

The commander came to a sudden stop and looked to the supervisor.

“Nothing really,” said the supervisor. “It’s just that…lately a problem we saw three years ago has reoccurred within our crew and it has me a little worried.”

“The same as when we constructed Base #8? You mean the fear that we’re violating the Messiah’s land?” The commander brushed up his hair and looked to the sky with a frown. He seemed to be choosing his words carefully. “It is true we can’t just write it off as simple superstition.”

“This land, and the Alfheim Meteorite Pit in particular, is home of the Messiah who saved Germany a thousand years ago and promised us a millennium of peace. You can hardly blame them for fearing that old saying.” The supervisor sighed. “You know, the one that says only the Messiah can awaken her dragon that slumbers in this land.”

“Yes, I remember when this was a problem three years ago. We even began leaving drinks at the Messiah’s shrine next to the crater as offerings. Leaving the drinks on that large stone leaning against that cliff wall was my job.”

“You slipped on your way down and broke your leg, didn’t you?”

“But I still showed up on site, earning me the praise of General Graham.”

The commander then opened his mouth and recited a poem.

In the deep darkness of the Black Forest

Born from the abyss

It whips up the wind and speaks with the dragon

It reads the wind and weeps

It carries power in its hand and hesitates

“That’s the 3rd Section of Daily Life from the Unreif Germane, isn’t it?” asked the supervisor while folding up the diagram. “One of the six sections passed down as poetry and song.”

“The entire Geheimnis Agency was given that text two weeks ago and told by the higher ups it is a prophecy.”

“Again, we can’t write it off as simple superstition. Germany currently has no Messiah, but the lost Messiah will be reborn once this poem is fulfilled.” The commander seemed to be trying to convince himself of that more than anything. “If the Messiah leads us, we would be promised another millennium of peace.”

The supervisor stopped folding the paper and looked up into the sky with a look of exasperation.

“A millennium, huh? Based on what I heard my son was taught in school, Germany was subjugated in the year 962, so we only have another 20 years before that original millennium ends.”

“The time is already upon us. The Great War that began with the God-Demon War 20 years ago was a sign of the storm to come. Your army has even started to advance west, so…”

The commander stopped speaking when the loudspeaker attached atop the winch control room picked up a voice from below. This was one of those working at the bottom of the hole.

“Report: we have arrived at the Excavation Point 17 as scheduled, but…but this is different from before. We have been working to prepare an area with a radius of 3 yards, but either the explosions did not reach this deep or this level was built separately from the rest.” The worker took a breath. “There is an entire intact and sealed room down here. What should we do, supervisor!?”

Hearing that nearly panicking voice, the site supervisor stuffed the folded diagram into his pocket.

“Hm.” He breathed from his nose before turning to the commander. “Shall we head down? We might discover just what P. Wagner was trying to hide in this lab of his.”

The winches began to reel in.

Just as the dirt was pulled up from below, they heard a gentle siren very different from the ones sounded in an emergency.

After noting the time, the commander fixed his uniform’s collar and replied.

“We can do that and then grab some lunch. Although we might not have time for lunch depending on what we find.”