Here we are at volume 3.

Many readers have asked the same question about the previous two volumes.

“Why does Hazel have a flat chest?”

…Um, how am I supposed to answer that?

3. They’d been too big before and I had a change of heart.

5. Write your own answer here:

This is a tricky question. Hmm.

But enough with the heavy stuff.

We’ve finally done it. With this volume, Panzerpolis Berlin has passed the midpoint. Hazel is feeling more like a protagonist (based on what?), so now it’s a race toward the finish. Going for 3+ books makes this really long for City, but I have you readers to thank for letting me do this.

Thank you so much.

The story has entered World War Two starting with ’42. The bombing of Cologne actually happened (there wasn’t a Gard-class or beam weapons, though) and reading up on that will show you a lot more happened in that war than you could ever imagine. Can you believe that they actually used more than 1000 bombers?

And this marks the first one where Berlin never actually appears (oops).

But it will appear in the next one, albeit as Germania, so wait a little longer. (Can you believe that the construction of Germania was actually planned? The real world is crazy.)

Anyway, time for the usual email chat with a friend.

“Dammit, man, you know I’m at the office right now, so stop being so cheerful.”

“I’m treating myself to a Dr. P*pper as a personal reward for staying up all night completing my manuscript, so hurry up and give me your thoughts on this one. If you don’t, I’ll jab you in your ‘I’ll tell you anything’ hole like we’re back in middle school.”

“What are you even talking about, you moron? And what kind of reward is a soda?”

“Well, I have to get to the office soon too. I usually treat myself to some Häagen-D*zs, but I’m not so sure about ice cream first thing in the morning.”

“And Dr. P*pper first thing in the morning is fine?”

“Shut up. Stop complaining about my diet and get to the point.”

“Okay, fine. So what was that? You couldn’t go through with it again? This one deserves the subtitle ‘Berger couldn’t rise to the occasion!’. Or maybe ‘Hazel’s trip to heaven denied!’ ”

“You know how I am. Especially in the morning.”

I guess so. Anyway, let’s stop talking about that.

This is going to be a lot, but here’s a report on my recent activities.

Last time, I said MediaWorks’s Dengeki hp novel magazine is published seasonally, but they switched it to bimonthly pretty much immediately afterwards. The City Series is currently (February 2001) being serialized in there. It alternates between Zenon City Tokyo in the February, June, and October issues and Image City SF in the April, August, and December issues. Both of those cities are visual heavy, so do check them out if you’re interested and have the time. That sums up what I’ve been up to.

My background music this time was Mozart’s Requiem. I listened to that and reread the book while wondering: “Who was looking furthest ahead?”

Now, then. Another Berlin novel is up next. 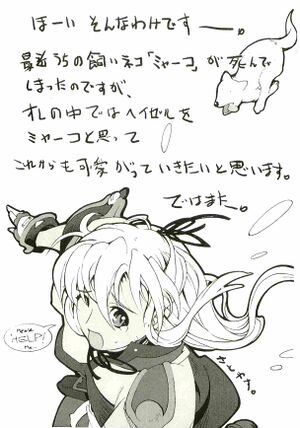 My pet cat Myako died recently, but I think of Hazel as being my Myako and hope to continue loving her for a while yet.