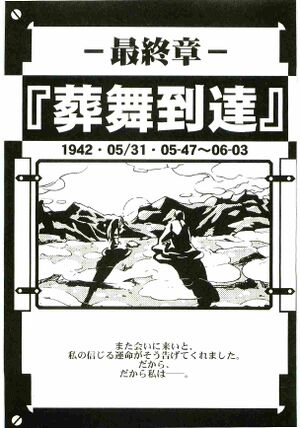 The destiny I believe in

Told me to go see him again

Hazel stood on the snow awash with the morning sun.

They were on the mountainous Swiss border, so the snow didn’t melt even during the summer.

But come spring, the green did grow from below the snow. Corelle’s green RB-21 had landed on a small green patch where it now sat silently.

Hazel stood in front of the ship’s side deck. Pale stood on her left and Berger sat in the snow to her right with the bottom of his black coat placed below his butt. Corelle and the soldiers were making a fuss around him.

And after a while…

…The plan was for Berger and I to leave in Schwarz Löwe and General Pale to leave in the RB-21.

“It’s no use,” said Corelle. “Hazel was right. This is a Lives issue.”

She stood up, revealing Berger to Hazel’s eyes.

His shirt was half removed, so she could see a strange dark area on his right side.

“I was getting used to it, but I think it’s changed color because I’m so close to the border.”

Pale answered him by slapping his shoulder with the envelope of important documents.

“Most likely, I’ve been infected with a Lives disease. My guess is, if I leave Germany – or more accurately, the effective range of the Vaterlands – I’ll Ash.”

“It’s a good thing you didn’t just fly over the border in Schwarz Löwe.”

“That’s for sure,” agreed Berger before ordering Corelle to prepare him some mountain gear and a backpack.

“I doubt it. I was given the ‘native’ Lives we lack as Glossolalians. You could heal me if my Lives were damaged or distorted, but it doesn’t work when they were instead made whole, right?”

“Hoping for a chance to use your Tuning already? Well, engaging in a Live exchange session with me might help relieve the pain.”

She realized something after her anger flared up.

…This is hard for him too.

When she hung her head, Pale reached his large hand over and rubbed her head.

“I took two test tubes of blood earlier. If we freeze it put the Lives in stasis, we can transport it overseas and get a serum made in Detroit.” He took a breath. “So don’t worry about it too much, miss.”

“That’s my line for her, you stupid general.”

She looked over to see Berger putting his shirt back on.

“Hazel took some of my blood three years ago. Compare that with what you took now and you should be able to make a serum. I’ll hide out somewhere in Germany until then.”

“The prosthetic arm isn’t done yet, is it?”

She shrank down and shook her head, but then she heard a voice from behind her.

“The AIF will do everything it can to get that serum made. You’ll owe us bigtime, so you’d better join up.”

Pale ignored Berger’s “huh?” and how Hazel stared at Berger.

“Listen, Berger. It’s about time you gave in and this seems like a good opportunity to me. You specialize in getting things and people out of Germany, so you’re in a tight spot not being able to leave the country yourself. Working yourself to the bone for the AIF if we rescue you seems like a fair trade to me. So how about it?”

Berger frowned and glared at Pale without hesitation.

But Pale whistled in response.

“Well, good luck. I’ve got some luggage to get ready.”

He shoved Hazel forward. Her feet caught on the snow and she tumbled down onto her knees with her hands on the ground in front of her.

He sure is rough, she thought, looking back and seeing him walking away.

She sighed once and slowly looked forward where Berger was seated within arm’s reach.

He was silently watching the sunrise, so she sat down next to him.

“I didn’t realize nervous sitting was a thing.”

Her shoulders drooped and she looked to him and his somewhat listless expression.

“It’s nothing but mysteries to you too?”

“Pretty much. All I know is we were trying to attack the Geheimnis Agency and Germany, but we only ended up forcing them to pull out all the stops.”

He let out a long breath with no apparent emotion on his face.

…He’s given this a lot of thought.

Then she realized something.

“I think I can answer two of the mysteries you mentioned to me.”

“Did I mention any to you?”

He turned toward her now, so she looked searchingly up at him.

“Yes. Last night, when you, um, well, pressured me, you said my dad punched you, remember?”

She thought about this.

…This is what he told me to do.

She bowed her head.

She raised her head to see pure confusion written on his face.

Amused, she used her finger to gather up the orange morning wind blowing near her cheek.

“Last night, after mentioning the condition necessary to join the AIF, you said you don’t know who my first was, but I should pass your apologies on to him.”

She couldn’t look him in the eye as she continued, so she faced the rising sun and intertwined her fingers.

“Three years ago, when I told my dad and teacher I wanted to join the AIF, they were fiercely opposed to it.”

“We argued about it for weeks and they finally explained the condition you had told me, thinking that would dissuade me.”

“Not a word of it was untrue.”

She turned to look at him again and found his jaw had dropped.

“You aren’t going to tell them about last night, are you?”

“I know exactly what I’ll tell everyone: I met you again after three years and we discussed our future together before you were very forceful with me.”

“Not at all. The AIF women are starved for stories like this.”

“I’d forgotten you’re a cat in more ways than one, Hazel Mirildorf.”

“I am.” She narrowed her eyes and smiled. “I am still just a kitten that could grow up to do or be anything. I will keep changing in body and mind. And…”

“My surroundings will change too.”

“You’re awfully full of yourself for a brand new Tuner.”

He stood up with a smile.

She did not stand up.

She held her knees between her arms and faced forward.

She viewed the German mountains.

The border was supposedly only an imaginary line on the map, but the nature of the land changed drastically when looking at the Lives. The border had real consequences.

…Both good and bad.

…We’re going to change, aren’t we?

“We’re both going to change even with this wall between us.”

Hazel kept her eyes straight ahead but used her ears to listen to Berger’s voice.

“There won’t be just one wall between us,” he said. “We’ll be on the attack and they’ll be defending. We have greater numbers, but they have High Organ Live weapons. The Allies’ High Organ development hasn’t reached practical levels yet, so this is gonna be a tough fight.”

“But we opened the door at Cologne.”

“Which is why they’re preparing for a real fight. The nature of the war has changed.”

“But…but we couldn’t meet each other and talk without opening the door.”

Hazel stood up and looked to Berger. He was already looking at her.

She started to say something to break the silence, but…

“Yeah,” he said in an exasperated kind of way. “You’re not like me. Once the war is over, you’ll make a great teacher. You can do things like that.”

He slapped her shoulder and then he started walking across the snow.

“We’ve got to talk with Pale, don’t we? We’ll be saying a temporary goodbye soon. And…” He stopped and looked back. “I have to tell him I’m joining the AIF.”

She tried to ask why, but he answered before she did.

“If you’re going to double down on being an idiot, the AIF needs my brilliance to balance it out. I’ll take the #2 spot where I can watch your back. …That’s what I mean, Hazel Mirildorf. So…” 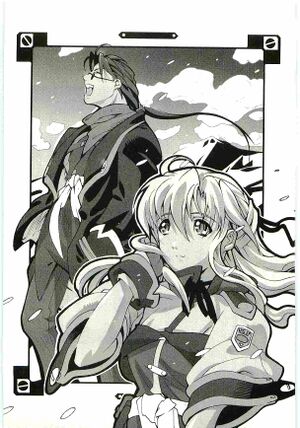 “So make sure you bring me that serum. I won’t get much business otherwise.”

With that, Dog Berger continued walking.

Hazel realized something while listening to the crunching of the snow below his feet and his laughter that carried well for a male voice.

…This is the first time I’ve seen him really laugh.

She could see it in his Lives as well.

She smiled and began walking too.

She hurried to catch up to him and pass him.

Hoping to one day move past him.

Hoping to move ahead of him. 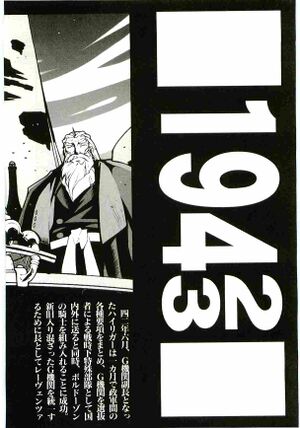 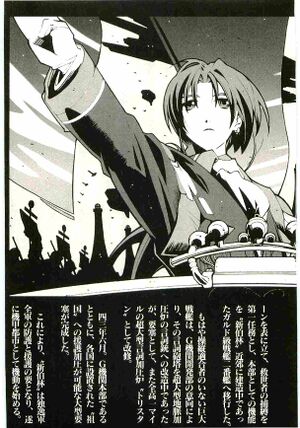 In June of ’42, Heiliger, the new second in command of the Geheimnis Agency, spent a month shoring up his influence in the government and military and deployed selected Geheimnis Agents inside and outside the country as wartime special forces. He also managed to bring the Borderson knights under the Geheimnis Agency’s control. With the agency a mixture of the old and the new, Lowenzahn stepped to the forefront and took command. She set capturing the Messiah as their top priority while also moving their headquarters to the second Gard-class warship being constructed near Germania.

The massive warship no longer had a pilot, so on the wishes of the Geheimnis Agency’s Development Division, they began modifying its Babel Kanone into a colossal ley line pressurization reactor word weapon. However, it was also modified as a part of Tristan, a word pressurization reactor standing over a mile tall.

In June of ’43, construction of the massive fortress was complete. It functioned as the Geheimnis Agency’s new headquarters and as an extra source of pressurization to support the Vaterlands built around the world.

With that, Germania became the foundation of defense and support for the Germany military and it finally began to function as the Panzerpolis. 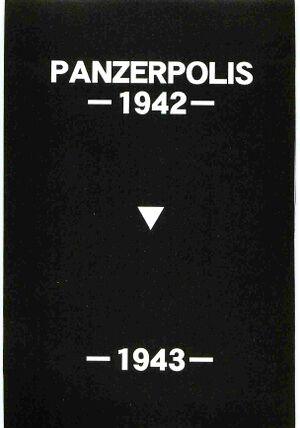 While the nature of the war changed several times, the Allies researched a ley line countercurrent anti-pressurization facility that could be used against Tristan. Research was based on used the Vaterland information acquired by the AIF when destroying the first Gard-class ship in ’39. Experiments began at the start of ’43.

The idea was to use a machine to oppose the support provided by a machine.

But even as machines began to rule the battlefield, the people were growing irritated with the never-ending war. Their nightmares continued and anxiety’s grip on the world was tightening.

The war was reaching a new stage on a global level.

Who could prevent this mistake: people or machines?

That answer can be seen in everything that began with the Greater Germanic Reich declaration in ’38 and ended with the failure of the Panzerpolis Project in ’43.