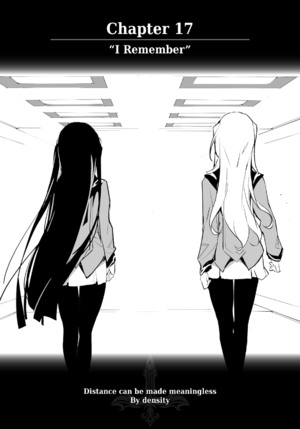 Distance can be made meaningless

The next day, word of the rank change spread like wildfire thanks to the school news.

…Those looks of curiosity aren’t due to the rank change.

The girl next to her could not have looked more out of place in her school uniform.

She did not have her textbooks or other school supplies yet, so she did not even have a bag. Oddly enough, while her footsteps had rung loudly in the shoes she wore with her suit, she walked silently in the heels of her uniform’s shoes.

…I stand out enough already.

“Here, the rules allow the third years to enter from the bottom.”

“Is that the same idea as rich families living in single-story residences?”

Horinouchi nearly asked what her house had been like, but she stopped. She did not feel that close to the girl quite yet. But…

“That was supposed to be a roundabout way of asking about your family,” said Kagami. “Did you not pick up on that?”

“I chose not to answer because it would sound like I was bragging.”

“Is that so? …My family had a three-story house with an attic.”

The way she laughed frustrated Horinouchi for some reason.

The general division school building was made up of a left and right building connected down the center. Their large classroom was on the eastern end. As they walked down the hallway, Kagami spoke while facing forward.

“If you want to say anything before we reach the classroom, then say it. Oh, but the fact that I look stunning in this uniform goes without saying, so do not bother. So what do you want to say, Manko?”

“Stop calling me that!”

“Then would Mitsuru be better?”

“I only ever let my parents call me that. But…” She felt a hint of resignation. “I don’t want you calling me anything weird, so call me that when we’re alone. Otherwise, call me Horinouchi.”

“What a complicated girl.”

“Well, I am the resident of a world you created.”

Kagami smiled a bit at that. Up ahead, the news of the rank change hung on the wall.

Horinouchi’s name and Kagami’s name were both written next to Rank 3.

How long were they going to be working together? And…

“I received an email from Hunter. She wanted to know if we were free this Sunday.”

She had not even needed to ask if Kagami was.

“I am looking forward to it.”

“Everyone! Nice to meet you! I am Kagami Kagami, a visitor from another world! Come on, Manko! Get in here! You really are shy, aren’t you!?”

Horinouchi decided it was time to teach her a lesson.