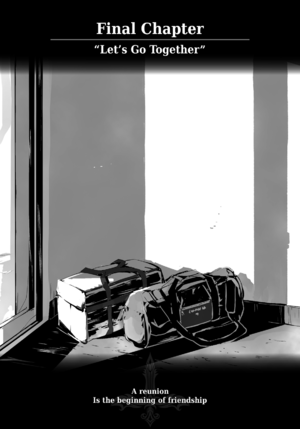 Is the beginning of friendship

Hunter prepared for her future.

She was packing her things.

Her room was in the special equipment division. It was a special forty-five square meter room given to Rankers. Those who loved machinery would apparently bring machine tools into their room and work with them, but it was nothing but wasted space for Hunter.

However, she was not leaving here. She was still the top of the special equipment division.

Her destination was the pier.

She had contacted the two in Rank 3 to ask if they wanted to hold a sort of party to celebrate their Ranker battle the other day.

It would be weird to reconcile their differences there, but they could at least take a less hostile relationship.

It was the same as the winners’ podium in sports. Whether they had won or lost, everyone who had given it their very best would recognize each other’s efforts.

It was mostly a ceremonial or traditional thing, but those two had also interested her on a more personal level. Kagami had her insane ether control ability, but there was a lot she wanted to ask Horinouchi as well.

Her father had not particularly liked Japan, but he had trained in karate at the base and she had based her combat style off of that.

Horinouchi’s style was a shrine maiden, aka a Japanese shaman.

Shaman-style witches tended to go deep in the forest, get tattoos, give sacrificial offerings of pigs and sheep, and perform strange chanting dances. There was also an American shaman-style, but they used a 75mm gun as a Normal Device, which seemed like it would only work when combined with overwhelming numbers.

At any rate, Horinouchi’s Form was from the same culture as Hunter’s, so their designs were somewhat similar. Plus, Horinouchi was the real deal that represented Japan. Even if the design of Hunter’s Form had no real flaws, a real Japanese witch would probably see it as an American karate-style.

What would a real Japanese witch think of it? If one of the top rankers had been a Japanese karate witch, she might have had a chance to fight them, but things had not turned out that way.

She had fallen to the #4 spot, but she had not given up on or lamented her skill.

She had hit a setback in her Ranker battles.

She had seen a lot of what these opponents could do, so something different might happen if they did it again.

That was all this was.

She had no complaints about her strength, but her motivation toward Hexennacht had fallen.

But not because she had lost.

…I was taken pretty far.

It had been a tough battle.

A witch battle came down to the maintenance and heating of their Phlogiston Heart, so it was a competition of willpower. The more intense the battle grew, the more of herself was drawn out.

What had that meant for her in that Ranker battle?

She had been cornered by Horinouchi and she had cornered Horinouchi. If the other girl had been that desperate, then she must have shown a similar level of willpower.

After all, how many people had lost nothing at all during the Hexennacht ten years before?

That was why those with power needed to wash away their grudges and defeat the Black Witch.

She honestly did not understand what Kagami had meant by that word, but she had definitely thought the girl might just be right.

Normally, she should have told Kagami not to mock her. After all, she had a responsibility to the people supporting her and the people she needed to protect.

She finished packing as she thought. She had enough clothes for a few days and there was barbecue meat and some other things in the refrigerator. She could keep the food cold with a cooling spell she had learned at school. After dropping the spell circle in the insulated bag and carrying the bag over her shoulder, she looked like a girl ready to head out for some summer fun.

She began to wonder if she should have gotten some sunglasses.

She did not even need her motorcycle to reach the pier, so she could leave her helmet behind. That just left her shoes.

“The normal ones should work.”

She walked outside in some deck shoes with crushed heels.

It was a sunny day.

The pier was surprisingly far away when walking from the dorms. Passing through the center of the campus, and thus the courtyard’s forest, was fastest, but she was not in that much of a hurry. She walked around the courtyard from west to south, passed by the front of the gym, and then by the side of the general division school building.

As she walked, she checked her servant hedgehog in its spell circle. It had already been repaired and tuned from the fleet on the Pacific, so it was sleeping peacefully.

In other words, I’ve got the day off. And that’s an order, Attack Spell Major Elsie Hunter.

…Am I trying to force myself into high spirits?

She wondered that as she walked.

She left the school grounds, crossed the road, and reached the path to the edge of the bay.

The sky was blue and the bay had the salty smell of the sea.

It reminded her of the past.

She had often gone out to eat with her father. He had been bad at cooking, so he had always tried to eat out. But that was expensive, so instead of going to a proper restaurant, they had often used a portable stove set to have a crude barbecue on the beach.

…Wait, am I whitewashing my memories? I say “often”, but it was only about three times a week. Well, I guess that’s actually quite a lot.

“Eat more meat!” her father had always said. “It’ll help you grow up big and strong, Elsie! And I’m good at grilling meat!”

You idiot. Eating so much meat automatically gave me a restricted carb diet which kept me so small.

She had only learned that upon coming here. When she had asked the school doctor, she had been told the following:

“Hm. You may have been getting the other nutrients from the barbecue sauce.”

Did you hear that, dad? Then again, I did get a fair amount of vegetables. From juice.

What would her father think of this situation if he were still alive and walking by her side?

What would he say about the fact that she was a witch, that she represented America, and that she had lost?

But she had to wonder. If he were alive, she would have felt like mankind had won the previous Hexennacht. In that case, would she have even been doing this? And if so…

She knew the answer.

“Then papa would definitely scold me.”

“He’d tell me this was his job and that I shouldn’t be doing it.”

That’s right. And that’s why I’m a fool.

Everyone had expected this of her and hoped she would do it, but the person she cared about most would not have. He had flown through the sky to make sure she did not have to.

Everyone had lost something ten years ago.

What was it she had really wanted?

“I’m a fool. And I’m going to keep being a fool for a little longer, papa.”

After realizing something so important so late, she decided to disobey her father. After all…

She looked to the pier.

“There’s someone even more foolish than me, so I’ve got to help them.”

She opened her mouth and a song escaped her lips below the blue sky.

It was the fourth verse of the Star-Spangled Banner.

“Oh thus be it ever when freemen shall stand

“Between their loved ones and wild war’s desolation.

“Praise the pow’r that hath made and preserved us a nation.

“Then conquer we must when our cause it is just.

“And the star-spangled banner in triumph shall wave,

“O’er the land of the free and the home of the brave!”

Hunter arrived at the pier.

A two ton truck filled with maids waited in front of the pier and a brand new car was parked behind it.

Kagami (who wore a suit even though it was summer), Horinouchi, and an unfamiliar man stood by the car. She guessed the man was the driver.

They were on their way to Shonan. They had invited her after her initial invitation, but she did not mind. Her invitation had mostly been from her curiosity in them anyway.

Also, she had something to teach them.

American-style Frames could be summoned quickly and she felt teaching them how to do that would be meaningful.

After all, they had accepted her reservations and stuck to their own strength.

She had lost, but that allowed her to do something. 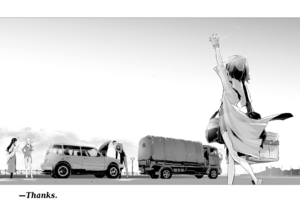 The world police, America, and the world’s greatest military force were not to be wielded on one’s own.

She adjusted the position of the luggage hanging from her shoulder and she spoke.

“Did you know you can lose weight by eating meat?”