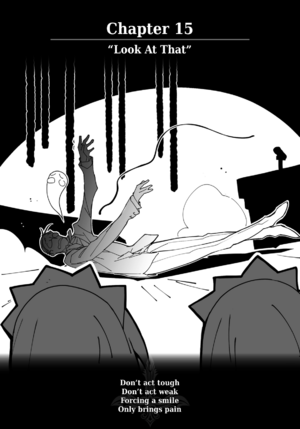 The night before, she had rested her elbow on the table and started speaking.

She had been thankful for that girl’s clear prompting, so she had taken a breath.

“The director who led that world knew that there was no saving that world even with me there.”

Horinouchi had said nothing when Kagami went on to say that was just an excuse.

It did not matter what others thought. It mattered what she thought. So…

“I’ll listen until you can convince yourself.”

“I thank you,” she had said quietly. “Despite that fact, I was asked to help because I could probably delay the end.”

“Then the reason you fled before the end was…”

“Yes.” Kagami had nodded. “The director knew my situation and asked me to go, lest I be too late for the other worlds.”

Kagami had hung her head and covered her face.

After a while, she had continued.

“Then again, I was too late for all the worlds before that too.”

“B-but that isn’t your fault!”

Kagami had raised her head and smiled.

That may have been why Horinouchi had stood from her seat and placed a hand on Kagami’s cheek.

“Have you shed that many tears already?”

“It seems to be something I cannot get used to.”

“Then,” Horinouchi had said. She had removed her hand from the cheek and embraced her own body to have somewhere to place the hand. “What did you do after that?”

“To make a long story short, I fled.”

“That is just being cruel.” Kagami’s shoulders had shaken a little and she had sighed. “The director said everyone else would escape too, but I had my doubts. That world’s transfer gate was poorly made and I doubted it could send more than me and one other person through.”

“The director told me not to worry because my student would be sent through first and that we should work together to one day defeat my sister.”

“Lady Kagami.” Koutarou had asked a question from the counter. “I know this is rude, but if I might ask a question. …If you had met Lady Mary before Lady Mitsuru, would you have made her your partner?”

“Head Butler! My foresight as a witch is telling me someone is insulting you!”

“Throw out that foresight and get back to work!!”

She remembered thinking Oh?, but was that accurate? Or was she only hiding her relief? However, she did know what Kagami had said.

“Why? If you told Mary what you just told me…”

“Mary’s reality is Mary’s reality. If I tell her my truth and make excuses, it will mean I did not accept her reality.”

“I am a visitor in all worlds. And…if I were to apologize to her, I would be insulting the director’s and the others’ concern for me.”

She had wanted to say that put too much of a burden on her. And that may have been why Hunter had gotten up from the sofa and joined the conversation.

She had laughed bitterly and collapsed back onto the sofa as she continued.

Horinouchi had nearly nodded and said “so do I”, but she had swallowed the words.

That had happened last night and long ago.

Horinouchi knew the truth, but Kagami would not tell Mary. That was Kagami’s right, so Horinouchi and Hunter could not butt in. But even so…

She had her own thoughts on what Mary had said during this battle.

“No one will bless a world saved by a grudge!”

She was the same. Most likely, Hunter and most of the other witches were too. After what had happened ten years ago, everyone had a grudge against the Black Witch. But…

“We aren’t fighting to take revenge for what was lost! We’re fighting to prevent any more loss! Isn’t that right, Kagami!?”

Mary gasped at the voice she heard through the gaps in the cannon-fire. She continued her swordfight with Kagami.

She did. She knew that world’s end had already arrived.

While entrusting the world to her, the director and the others had known how much of a burden it would be.

That was why they had said nothing about her teacher.

But Mary understood all that now.

Beyond the sparks, her teacher said nothing. She simply received or dodged Mary’s blade while making definite and skilled attacks of her own.

Mary understood why she would do that.

Mary was wailing over the destruction of her world, but the opponent before her had been involved in many worlds before that and then seen them all destroyed.

“Why…!?” she asked, searching for an answer from that silence. “Why!?”

She recalled the sword training she had received long ago.

“Why did you appear before me again!?”

Kagami deflected the strike and responded.

“You have grown, Reese, warrior of the May clan. And I see you have made friends.”

“What are you talking about!?”

“The director told me you had trouble making friends. But it seems things are different in this world.”

“What are you talking about?”

“This is what that world wanted for you. …And it is something I could not teach you or grant you,” she said. “So you were not wrong, Mary.”

In the spell circle footage, Horinouchi saw the two of them stop moving atop the crumbling Magino Frame.

But after a few breaths, Mary suddenly took action.

She raised her triple scythe toward Kagami.

The maids did not even try to stop Koutarou as he went limp and collapsed to the side like a felled tree.

He then rolled down the steps, crashed into the wall, and began humming a sad song, but he recovered once he heard some of the witches tending to their equipment.

That weapon was turned toward Kagami, but it did not reach her.

Mary slammed her scythe blade into her own Magino Device.

With a solid sound, cracks ran through the Magino Device’s armor. And…

Mary bent over, placed her forehead against the scythe, and cried.

The grim reaper hid her face in her hood as she shouted.

“It would be so much easier if I could get rid of all this destruction, this doubt, this grudge, and myself!”

The tall girl slowly fell to her knees.

“They entrusted the world with me, but what am I supposed to do!? I’m not as strong as you! I was only chosen because I had a bit of power!”

Mary asked a question to that familiar form standing with the moon behind her.

“But the Black Witch is in this world…”

“Manko and I will defeat her.”

A spell circle from Horinouchi immediately appeared, but her teacher quickly folded it up and put it in her pocket.

Mary sensed some killer intent from below, so was that really okay? Then her teacher spoke with an air of “at any rate”.

“Mary, you only need to live. Simply do that and everyone else will live on with you.”

“There was something I was unable to tell when I had you buy me those drinks last night.”

That was true. Mary had cut her off and left, but…

“I am grateful that you are alive.”

“And let me add one more thing.”

“Live, Mary Sue. You can run away or give up if you want, but make sure you live.”

She held out her hand, but Mary only stared at it.

And she stood. She did not take that hand. She used her own two feet. That was her answer. After all…

“Enough to stand on your own, at least.”

Her teacher smiled and pulled back her hand. Mary’s shattering anger rose into the sky as light around them.

She breathed out and more tears spilled from her eyes.

“This is the last time.”

It was already over. She had not lost anything. It was simply over.

And that brought some words to her lips.

“Where to? No, look carefully.”

She looked back and found Ira had fallen far enough to see Shihouin Academy.

She saw the artificial island’s coast, the academy grounds, and the building rooftops.

People and her classmates were there and raising both arms.

Mary heard her teacher’s voice just as the cheering voices below realized she had looked back their way.

She heard voices saying “well done”, “great job”, and “you put up a good fight”.

The ones asking her to hurry on down were probably her classmates. But her teacher had more to say.

“If this surprises you…then you must not have noticed. You were not alone in this world. You had all these people with you.”

The witches gave welcoming cheers from the pier and the rooftops.

She even saw a picture of Macabre made with illumination spells on the Spell Division rooftop.

“Yes,” said the teacher behind her. “If you had noticed this, I doubt we would have won. …The warriors of that world could draw out their greatest strength when they had something to protect.”

“There is no reason to hesitate,” said her teacher. “You have a home here, Mary.”

She nearly agreed, but she swallowed the words. She was not that obedient. But there was no point in denying the truth before her eyes, so she nodded as if to convince herself.

She then said one last thing to those cheers.

She said it clearly and this time she did not look back.

She sure is popular, thought Horinouchi as she watched the two Magino Frame’s scattering after canceling her own Frame and returning to her uniform.

Mary flew down toward the Spell Division rooftop and all the cheers there.

The praise mostly came from how little anyone knew about her as a Ranker and the impressive fight she had put up leading to her defeat. Even greater cheers surrounded her as she descended.

Kagami must have been exhausted because her Frame came apart in midair.

Horinouchi saw her fall into the ocean beyond the pier.

She contacted Hunter and had the Special Equipment Division send out a boat to rescue her. She decided to wait at the pier’s mooring area. That soaking-wet idiot would eventually be standing before her with a smile, so what was she to do then?

Should she scold her first? Or…

She said that now, but she would never say it later.

Once the dawn came, summer would be over. The moon was visible in the sky, but their days as the Rank 2 would begin tomorrow.