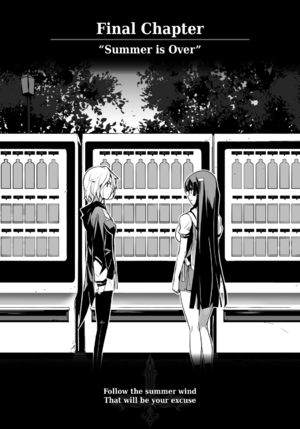 That will be your excuse

Summer is over, thought Mary.

The days were still hot, but the heat no longer lingered inside her clothes. The air was simply hot with low humidity and it would then become a wind.

Three days had passed since the end of the Ranker battle.

Everyone had already forgotten the excitement of that day and returned to their normal lives. She too had returned to her normal life with the questions from the PR Committee as the only lingering effect.

Her usual friends had started something on the roof, so she had gone to buy some drinks.

She chose the same courtyard vending machines as before. Walking there without using any noticeable spells took less than two minutes.

She soon arrived in that clearing with the mausoleum hill to the north. She approached the row of vending machines, but found a familiar person there.

She was pretty sure that was her name. She could have sworn she had heard it was Mitsuru, but this must have been her true name. Some magic required speaking the target’s name, so perhaps a forbidden name that one could not carelessly say out loud was a defense against that. The Horinouchi family was frightening indeed.

At any rate, she stood next to the girl who was audibly pondering what to buy and she too began to think.

When Horinouchi noticed her, she nodded.

And she decided she might as well say something else.

“Could you buy me some drinks to make up for before?”

Before? wondered Horinouchi until she realized what Mary meant.

…Sh-she’s referring to that night, isn’t she!?

Kagami had taken an awful long time to get some drinks, but Horinouchi had never imagined the girl had made their opponent buy her the drinks.

Horinouchi did not like being indebted to anyone, so she decided to pay off this debt.

She was surprised to find that Mary’s immediate reply lacked the harshness from before.

As the Shinto representative and a shrine maiden, Horinouchi would perform ritual prayers. She sensed no ill will in Mary’s voice, so she decided she was safe. And so she held up her card.

“Thank you very much.”

Mary bowed and pressed four buttons. Horinouchi approved each payment on her card, but after Mary grabbed the fourth drink…

…Is there some point to this time-delay attack?

She could guess that Kagami had done that to Mary the other night. In that case, she was obligated to fill in for Kagami here.

But then she saw the fifth can Mary took.

The girl seemed to like black, so Horinouchi had expected her to choose the squid ink barley tea or the health asphalt tea. But if she was choosing milk…

“No, someone once told me that drinking milk would help me grow tall.”

Why was it she could guess who had told Mary that?

…And I guess that means they had milk in that other world.

Was that a mistake in the setting or was there a reason for it? She did not know, but if they bought milk like that there too…

She bought one more drink and Mary glared at her.

What’s this? she wondered as Mary pointed at the can she pulled from the vending machine.

“You should quit drinking the carbonated ones.”

Mary nodded, paused for three seconds, and suddenly glared at the vending machine.

“Sh-she told me not to drink those…!”

Why was it Horinouchi could imagine both the other world and current world sides of that story?

When did I fall for her trap!? angrily wondered Mary. But…

…Well, it is true I grew tall…

The fact that she began searching for ways to calm her anger made her think, “Oh, I’m a fairly convenient person, aren’t I?”

Then she heard a bitter laugh next to her.

“If you like, come join us. We’re just enjoying ourselves without being too formal.”

“But the Brigadier General…”

“She’s sitting there without worrying about any of that.”

Mary understood that girl enough to say, “I suppose she would be…”

But there was more to the Brigadier General than that.

Horinouchi turned toward the General Division dorm as if to avert her gaze.

“She is a companion, but also a visitor. No matter how this turns out, she will eventually leave. But…”

On her prompting, Horinouchi continued.

Horinouchi recalled her mother as she spoke.

She also remembered what Kagami had said on that sunset pier and everything that had happened since.

She would not forget about her mother, but there were some things she had now specifically because it was the present. And so she spoke.

“You asked why she appeared before you again, didn’t you?”

That could likely be called destiny, but if she was going to describe it using the visible phenomena…

“Everyone comes across losses and meetings like that. So when I meet someone, I want to treat it with the importance it deserves.”

She waved goodbye and left Mary.

She was grateful that the girl remained motionless. That meant she only had to leave as quickly as possible so Mary would not notice something. After all…

…Wh-why am I giving my approval for everything that’s happened with Kagami!?

Momentum is a frightening thing, she concluded.

“What!? Blushing!? Did she shame her in some way!? Like by saying her name over and over!?”

“That isn’t her name, Head Butler! Correct your memories!”

…She is a considerate person.

She bowed toward the departing figure and then started back toward the Spell Division dorm.

Despite walking away from Horinouchi, she felt oddly like she had not turned her back on her.

It just felt like she was walking in a different direction. Like she would see her again tomorrow.

She thought and failed to find an answer, but she suddenly found herself back at the Spell Division dorm’s roof.

As usual, a few groups were researching spells. The latest fad was searching for directions of good luck. It seemed to have been started by that moment when they had seemingly vanished during the previous Ranker battle.

They were likely trying to find a way not to lose sight of them next time. But…

A classmate spread her arms in front of a spell circle floating just barely off the floor.

“We’re freezing things with a spell! Do you want a lemon or a melon!?”

She answered, passed out the drinks, and then sat in the circle with the others.

They all raised their voices when she did.

She found the impressed voices puzzling, but they were already opening their drinks and having a toast. One of them held her can up toward Mary.

“This is the first time you chose to sit in our circle. We need to celebrate.”

“Look.” Another pointed to the edge of the roof. “You always sit on the edge there, listlessly staring out at the restored city.”

“Well, this might just be on a whim, but at least you know that isn’t the only spot for you.”

Once they pointed it out, it did seem odd. It was true she had thought of that as her spot before, but for some reason she no longer felt that way.

“Does that mean I’m free now?”

“I know, right?” said someone else. “Anyway, we’ll always make sure there’s a spot in the circle for you.”

“And if no one’s here, just sit down and someone’ll be here before long. …Only afterschool, though.” 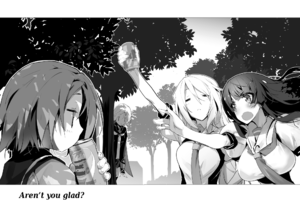 Then they all smiled bitterly.