Chapter 15: What I Want To Convey[edit] 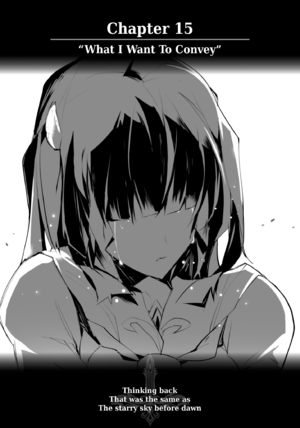 That was the same as

The starry sky before dawn

Horinouchi and Kagami descended to the ground in the early dawn.

This place had been a battlefield not long before.

A plain continued as far as the eye could see and the Nasu Highland and the mountains could be seen beyond a horizon that showed the curvature of the Earth.

US F-23s flew in wide arcs overhead to protect them. The low rumbling of shockwaves reached their ears, so the battlefield must have contained some considerable decibels for this to seem quiet.

Hunter and the Americans had performed an inspection out at sea and had concluded none of the explosive spells remained.

The European U.A.H. Magino Devices were still visible in the western sky, but they were not approaching. Horinouchi and Kagami had already dispelled the Geo Frame and had returned to their normal uniforms.

They would likely return to the academy in a Japanese U.A.H. helicopter arranged by Koutarou.

…How am I supposed to handle all this once I get back?

Horinouchi would have to give an explanation to U.A.H. and provide a response for the Horinouchi family. Even if she left all that to Koutarou and fled into the school, she was being treated like a celebrity lately and the newspaper club and PR Committee would never leave her alone. And since she was the Student Council President, they had the perfect excuse to approach her. But something else was important at the moment:

It was not their first time meeting, but she was unsure if she should use her given name like that.

Nevertheless, she called out to the weeping girl who was sitting in the dark field.

Part of Horinouchi thought this was the arrogance of victory, but…

As soon as the crying face spotted her, the girl stood up.

She had realized these two were the opponents she had fought during the battle.

She took 11 steps. That brought her to Horinouchi, but she ended it with what amounted to a tackle.

She clung to Horinouchi and hit her. She pushed with her entire body, telling Horinouchi to stand back.

She was saying she refused to accept it. She wanted to say that the other two girls, the previous battle, and the circumstances she found herself in were lies and impossible, so she pushed back, trying to defeat them.

Horinouchi accepted those thoughts. She took a light step back and looked at Fleur while sensing her heat.

Kagami started to provide support from the side, but Horinouchi stopped her with a hand.

She simply listened to Fleur.

She knew what the girl was saying.

She really did understand. Fleur had not been ignorant of her mother’s situation. But she had refused to accept the inevitable future, created certain conditions she could use as an excuse, and clung to them.

And Horinouchi understood how this girl felt as she sobbed, grabbed at her collar, and yet buried her face in her chest.

Horinouchi had once been the same. So…

She held the girl in her arms. The girl’s small shoulders shook.

Yes. This was the arrogance of victory. If the loser accepted it, it would mean accepting what she had lost.

Horinouchi would not tell this girl to feel the same way she had in the past. But…

She looked at the teary face looking up at her.

She looked at it through her vision which had grown blurry at some point.

But when she looked up, she saw something.

The girl holding her was crying.

For some reason, Fleur felt like there was a smile on her own face.

That feeling brought a sense of shame.

“Wh-what are you doing!? Your tears of sympathy aren’t going to-…”

She recalled the past and the events on the sunset pier after her battle with Kagami.

“This is not sympathy.”

She continued to cry, but strength filled her eyebrows as she spoke to Fleur.

“Your mother, who was also our savior, has been lost. That and the fact that you are sad are making me sad.”

This was not sympathy. It came from her care for the target of the other girl’s sorrow.

And so she wept.

She now understood why Kagami had cried back then.

Would this girl in her arms understand one day?

Kagami called to them, so Horinouchi looked back and saw a certain sight.

The surrounding land was being illuminated by the rising sun. The white sunlight was level with them, but it soon rose to an angle and lit up the field in which they stood. And as that light filled it…

Hearing Fleur’s voice, Horinouchi let her go. That small body stretched up on her toes to see the entire scene.

She was simply not tall enough for that. After all, what they saw continued beyond the horizon.

“The Lady Headmaster apparently sowed divinely protected flower seeds here as part of the recovery work. …As she chose this place for the battlefield, Fleur, she must have wanted you to see this no matter how the battle turned out.”

“Do you perhaps sense your mother here?”

Fleur looked back with tears in her eyes. But instead of answering, she wiped away the tears, turned her back on the other girls, ran a few steps forward, took a heavy breath to catch her breath, and…

Fleur yelled to the earth and the air.

That was as far as she got. She covered her face with her hands, raised her voice again, and wept.

But this time it was not to resist or accuse; it was to rid herself of her anger.

Horinouchi had once cried like that. If no amount of resistance and accusation would change anything, then crying your eyes out was the only option. And once you grew sick of crying, you would stand back up.

She wondered what her mother would think of her past self and her present self, and then…

Perhaps because of the flowers’ divine protections, a wind carrying ether light whipped up around them and then moved in next to Fleur.

For a brief moment, Horinouchi could have sworn she saw the woman there: smiling, holding weeping Fleur’s shoulders, and nodding toward Horinouchi.

The woman flew up toward the rising sun and toward heaven. She left the flowery earth and vanished.

Or perhaps Horinouchi only imagined it.