Final Chapter: That is a Small Light[edit] 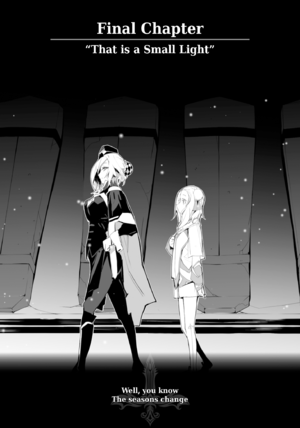 The Ranker Battle ended and a week passed.

Lisbeth had rethought why she had come to Japan.

She had originally come as a representative of European U.A.H., but on the day after the Ranker Battle, U.A.H. had left and she had taken over as Shihouin Academy’s headmaster. U.A.H. had protested this, but after some pressure from American U.A.H., she was accepted as a special adviser from European U.A.H.

She had a lot to do. Not only did they have to prepare for Hexennacht, but every country around the world was boiling with excitement over the concept of the Geo Frame. The presence of Kagami Kagami as “the Black Witch’s sister” drew people’s attention both positively and negatively and she could only smile coldly when no one could decide whether the girl should be given an inquiry or an interview. As she kicked out all requests for Kagami to visit another country or the mass media, Lisbeth realized just how right she and Cerisier had been to create Shihouin Academy.

…We were much the same back then.

The Horinouchi family had worked well for Mitsuyo, so Lisbeth felt an obligation to protect Mitsuyo’s heir in the same way. But…

She had an important job today.

Fleur had come to school for the first time in a while and she had said she wanted to visit the mausoleum.

Lisbeth guided silent Fleur down to the end of the corridor and pulled out her card key.

“You take this, hold it out like this…and it opens.”

Will that surprise her? she silently wondered, but the girl seemed too focused on holding something inside.

Well, that doesn’t matter, decided Lisbeth as she opened the door and looked within.

It was a dark space illuminated only by the installed lights. But there was one thing illuminated by the central coffin’s lights: a flower dragon.

It was pink and it noticed them.

Oh? thought Lisbeth as it passed between her and Fleur and ran off.

A flower dragon was a powerful type of servant, but she had no obligation to capture it. If it had lost its master, it would find someone else for a symbiotic relationship.

…And I suppose this girl is the same.

Lisbeth looked to Fleur next to her.

A great change had occurred in that girl.

…She can’t use even the simplest of spells.

She had not lost her ability to control ether. She simply no longer knew what to do with it.

Her combination with her mother had likely been too perfect. For better or for worse, Cerisier had guided Fleur’s actions.

Simply put, she lacked the methods, but she still had the ability. If she was eventually given the chance, she would likely return to normal. After all, an investigation had found her ether control and ether extraction abilities were far greater than Lisbeth’s own. That colossal Device and its attacks had used the ether she drew out as its foundation and Cerisier had only lent a hand in controlling it.

And when she stepped inside the hall full of withered plants…

Fleur ran over to the coffin in the center. Her feet sounded light on the plants and she kneeled down next to the coffin.

Her mother slept there.

That familiar cry contained a tremor.

“You were here the whole time, weren’t you?”

Yes, thought Lisbeth. She is saying goodbye to her mother.

She had used the past tense. By seeing this unmoving form, she engraved in her heart that this precious person was someone who had already left and would move no more.

“Can I stay at this school?”

“I have no intention of letting a promising witch leave.”

“You were,” agreed Lisbeth. “You took the most convenient interpretation of what your mother said, you indulged in that, and you simply relied on her without doing anything yourself.”

“Cerisier would not have traded that time for anything. …I can only say I feel bad for her since only we get to see you become a good girl.”

“Tell me when you grow tired of being a student. I will make you headmaster. It is a simple job. …You only have to plant flowers in the wasteland.”

“I see,” replied the girl’s small back as she hung her head, let her shoulders shake, and yet noticed something.

Was she? Had rigor mortis set in even within the preservation spell? But when Lisbeth had seen her the night before, there had been no smile on her face. If there was…

The records of that battle said that Cerisier had met her ultimate end while trying to protect her daughter.

…Did you hear me?

Lisbeth noticed a small light at her feet.

It came from the plants.

That was where the flower dragon had been. That servant had likely stayed there protecting the last remnant of its master’s soul.

That old friend’s soul had not been lost.

Lisbeth noticed heat on her cheeks below her eyes.

On the way here, the 2 who had become the Rank 1 and the other 2 had been fighting over food and shouting something about a celebration party up on the cafeteria terrace. Part of Lisbeth had been exasperated, but another part of her…

She and her friends had been the same. Cerisier meant “cherry blossom”. And that spring flower had finally withered.

But the autumn flowers were waiting to bloom.

Flower gardens were best when they were busy. Noisiness was its own sort of beauty. 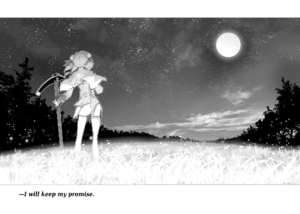 “When mama and that shrine maiden’s mother…decided who would be the representative, why were they fighting?” asked Fleur. “The Ranker Battle system didn’t exist back then, right?”

A colossal Device and a Geo Frame had been summoned 10 years before. And the reason behind that battle was frightening indeed.

“They were fighting over the 8 PM TV channel.”

Fleur looked back and forth between Lisbeth and her mother with a look of disbelief on her face, but, well, that happened a lot.

—I will keep my promise.