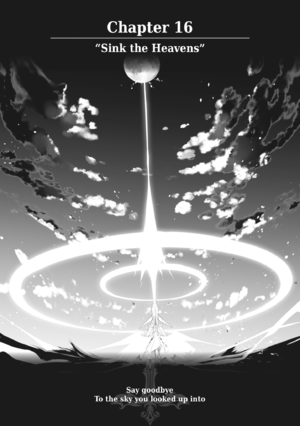 To the sky you looked up into

With the dark clouds in the sky, Horinouchi thought it looked like snow, even with the moon out.

As far as she could tell from the Geo Frame’s chest, the light was falling all across Kantou. And starting from the band of planetary-level divine protection created on the surface…

The Black Witch’s reinforcements were crumbling.

Everything came to a stop and seemed to melt away. Once their bodies had collapsed about halfway, they broke apart into ether light.

There were some in the sky that had yet to fall, but they scattered into light in midair.

When she looked far into the distance, the band of light spread out like a curtain from east to west.

Hexennacht was over and the glowing curtain was closing.

It was a strange sight.

“Even the giant Black Device and those dragons and dolls become ether light once they break apart.”

She then looked over at Kagami.

Kagami held a girl in her arms. That girl who wore a black Form was the being they had called the Black Witch. But now…

“Is your sister all right?”

“She was always much more peaceful while asleep. And peaceful is probably what she plans to be now. But…”

Kagami placed her sister in a cradle made from a spell circle.

Horinouchi knew what Kagami wanted to do.

There was something they had left undone.

She looked directly overhead, toward the moon. The full moon still hung in the center of the heavens.

“Since the moon has not moved from that spot, it must not be my sister’s doing.”

They saw a line of light as they looked up.

“It is the Book of Creation.”

I need to land somewhere higher up next time I drop down onto it, thought Hunter as she climbed up onto the Geo Frame’s chest stage.

She was of course using her Normal Frame, but so was Mary who had also climbed up.

And after exchanging a glance, they heard a voice from above.

Fleur jumped toward them with a light step and she was oddly full of energy.

But then she opened a spell circle connected to the Shihouin Academy HQ.

Damn right they could see it. It seemed to be making sure they could not avoid seeing its glowing ascent.

“That book…is on Shouko’s side, right?”

But if they did not do anything, this really would get serious, even if it was only pretending.

“It intends to escape to the moon and seal itself once more!” said Lisbeth. “That way we cannot interfere until it finds a new imaginer.”

Would that really be so bad? thought Hunter, but she knew that was being naïve.

“Anyone the Book of Creation chooses would be a creator who only ever chooses what’s new, wouldn’t it?”

“That is correct, …It was created in the world’s dawning age, so there would have been nothing in the world and it would have been acceptable to only desire for what is new.” Kagami shut her eyes just once. “But now the world is a richer place and needs to do things differently, so the Book of Creation no longer fits in.”

“Let us send it back. …This world has surpassed imagination, so let us return that power of creation to the ley lines so that it might become one with everything. That is what we must do as those who will live out the new way of doing things.”

Hunter, Mary, Fleur, and Horinouchi formed a ring with her and raised their hands.

“Let us bring an end to the illusions and misunderstandings of imagination that cross all the many worlds.”

“Yes,” agreed Horinouchi. “From now on, Hexennacht will be a night worth remembering.”

It had used the Knight-style before, but now six giant wings grew from its back. And instead of folding up, they spread out in the air behind it. As for the front of the Geo Frame…

“No, Head Butler! It’s getting even flashier!”

“That’s the Princess-style! I’ve never seen it before, but it has to be!”

“You don’t get fashion at alllll, do you? The Head Maid is going to have a lot of trouble from now on, isn’t she?”

“What does any of this have to do with me!?” protested the Head Maid.

But more importantly, the six-winged Princess-style Geo Frame stood tall within the storm of ether light snow falling in the night. The weapon it raised was the weapon that had once pierced the Black Witch’s hand as it approached from the moon.

“An arbalest made by combining Dikaiosyne with Akerindou!”

The weapon was six-times larger than back then and the princess raised it toward the sky with both arms.

Koutarou looked to the others. The Head Maid used a karate chop to silence a maid that was about to jump the gun and then she gave everyone a commanding look.

With the others behind him, Koutarou lightly spun his arms around and then raised them.

“Well done! Well done, Horinouchi. Oh, come to think of it, I never called you Manko this time! I need to do better than that, sorry! How about using it as the signal for firing!?”

“Can you please keep your eyes on the sky!?”

Amaze saw something at a point on the earth far below.

A phenomenon greater than a mere spell was underway and targeting Amaze.

And there they were.

It was Shouko’s sister and her companions.

“Are you sure?” it asked. “If you destroy ‘me’, every single world will lose the benefit of creation. That will delay the development of humanity. Can you really accept that!?”

She did not hesitate to answer.

That’s incredible, it honestly thought. She is even more decisive than Shouko said.

So Amaze waited for her words while continuing to fly.

And her responding will reached it in the form of words.

“We now see imagination as something real, even without turning it into creation.”

“You claim imagination is mere fiction and you value imagination while also throwing it out instead of taking care of it, so your role has ended!”

“From now on, remain in this world and use that divine protection of creation to protect everything, you guardian of humanity!”

It saw light rising from that point on the earth.

The attack was directed straight toward it. This was an attack greater than imagination and it was more powerful than everything Shouko and Amaze’s previous owners had accumulated.

Amaze only now accepted that this girl was Shouko’s sister.

There was no greater praise.

The attack pierced the heavens and the blast pushed Tokyo Bay down to the very bottom.

Shihouin Academy had defense barriers up, but the pier and surrounding water were blown away and the mud of the ocean bottom burst with enough force to splatter onto the barriers and bounce off again.

Tokyo Bay’s coast was using all of its anti-wave spells and tsunami-protection technology. A cylinder of light seemed to surround the stage where the Geo Frame’s attack reached the moon.

The shell broke through the Book of Creation and crashed into the moon.

The white satellite bent as if being pushed away from the earth, split around the swollen peak, and then shrank in size.

After everything was compressed to about two-thirds its size, the shell’s power had nowhere else to go, so it finally carved away at the surface.

It tore into the moon and simply attempted to pierce straight through it.

There was a house at the location of the hit, but it was shattered and everything was smashed to pieces by that mortar.

All that remained was for that force to reach the core.

It only took an instant.

As if shifting its orbit, the crushed moon shook in the direction of the earth’s rotation, but it could not withstand the strain and lost its form.

Amaze was reminded of old times in the instant it lost its shape.

Even as it was destroyed, it did not forget the engineer who had produced it or a certain conversation held in front of a fireplace one night.

That was after it had already lost its form as stone slabs but before it had gained its final form. At that time, it had just been made into a book.

Its master had been an unselfish person, but he had been interested in books and had worked with Amaze to create technologies for producing and publishing books.

After completing a few such technologies, Amaze had realized that he no longer had any desires.

But it had thought this master was the most knowledgeable and thoughtful of any it had had before, so it had done one thing before returning to sleep.

“I want to know about the future.”

That was something Amaze could not imagine.

“Master…at what time would I no longer be needed?”

That conversation wasn’t actually in Japanese, was it? I think I’m altering the memory after spending so much time with Shouko.

But whatever language it was in, Amaze’s master had definitely given this reply:

“That would have to be far, far into the future.”

“No, I am not just talking about a length of time.”

“The world would be overflowing with creations and a diversity of value systems would exist.” Amaze’s master had smiled. “I have no idea when a time like that would arrive, but you should feel proud when it does. Because it would be your presence that allowed the world to develop that far.”

It had then gone to sleep. The next thing it had known, it was busy granting a certain girl’s desires.

Just now, the world had surpassed it. And not just the new things, but the old things, the common things, and everything else.

If everything had the potential to create new things, then its role was over.

“Book of Creation,” said Shouko’s sister. “Return to the ley lines. And we will meet again somewhere. Next time, I hope we can do something together with you in your new form and new role.”

Its role was complete. But it would not disappear or be lost. It would return to the world it had created and be born again. And if it could hope for another life…

It too had something to say. It had to do with the many stories it had experienced with that girl.

What were you supposed to say when the conclusion left you hoping the next story would be just as enjoyable?