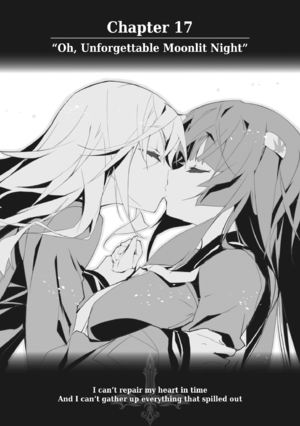 I can’t repair my heart in time

And I can’t gather up everything that spilled out

Pieces of the moon scattered in the night sky like the milky way.

And as the morning light shined on the Geo Frame’s chest, Kagami stood with the light behind her and Shouko’s cradle by her side. She looked back toward the others.

Only after calling out to them did she realize the morning sun was visible through her body.

The sunlight was faintly passing through her.

“It would certainly be a problem if my insides or some more arousing areas showed through.”

“I think we’ll be fine as long as the contents of your mind don’t show through.”

She had to smile bitterly at Horinouchi’s comment, but one thing was certain.

…So this is goodbye.

She would leave this world.

Her sister had lost her power and the Book of Creation was gone. She and her sister had been bound here by those things, so they would leave this imaginary world and return to the real world.

They would wake from the dream.

“I want to scold Shouko for going with an ‘it was all a dream’ ending, but maybe that is not the best idea.”

She saw that Shouko too was growing transparent.

Horinouchi must have realized the time to say goodbye was approaching fast because she canceled her Frame.

The Geo Frame slowly fell apart, but it was so large that there was plenty of time before it entirely vanished. Kagami also canceled her Frame and returned to her normal appearance.

Then Horinouchi appeared right in front of her.

“Lose something and you will come across it again later. Look at it like that for now, Mitsuru.”

“Yes.” She nodded and smiled a little. “It isn’t often you use my actual name.”

“You wanted me to call you Manko that badly…!?”

She glared at Kagami.

But Kagami did not let it bother her.

“But Horinouchi…I thought you had something to say to me before I left. What is it?”

Horinouchi suddenly blushed and froze in place, so Kagami walked all the way around her.

“In the hospital…yes, I do believe I heard something like that.”

She added another “yes”.

“For battle purposes, you should probably start using lipstick that does not come off quite so easily.”

…After everything, I have to deal with this!?

Hunter and the others were whispering something behind the other two.

“She’s a lot more proactive than I thought…”

Shut up, all of you. And I certainly didn’t expect things to turn out like this.

But she wanted to fight it here.

“I will not say it. Saying it now would only make me regret it more.”

“In that case, there is something I would like to say. …Horinouchi, could you lean in here for a moment?”

And Kagami kissed her.

She heard an “ah” and an “oh”, but that was meaningless.

Tears spilled from her eyes, but Kagami would not allow it. She pushed against her lips even harder and Horinouchi responded in kind. And…

They pulled back for air at the exact same moment and more tears fell.

She wiped them away with her hand.

“…I can’t believe we were thinking the same thing.”

“That is why I chose you, Horinouchi.”

Kagami looked her in the eye with tears in the corners of her eyes as well.

“I chose you to laugh, cry, and grow angry with. …And it does not matter even if you do forget me. I will always be with you whenever you laugh, cry, or grow angry.”

Kagami picked up her sister.

It was time to say goodbye. Horinouchi could still feel the heat on her lips as Kagami smiled and opened her mouth.

In that instant, Horinouchi nodded and spoke her own words. So did everyone behind her.

“You have my thanks.”

She heard Kagami’s voice join theirs, but was that just as an illusion as she disappeared?