Final Chapter: A Place of Memories[edit] 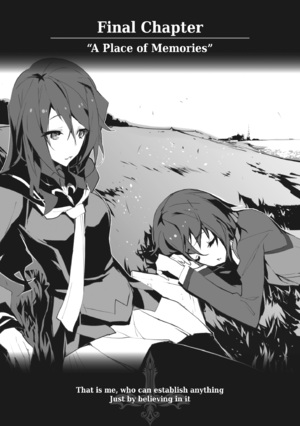 That is me, who can establish anything

Just by believing in it

Her body felt horribly heavy and slanted. Of course it was.

When she went to meet her sister, if her sister was feeling well, they would come here to enjoy some snacks and to talk.

When she got up, she noticed her hair color.

It was black. Not white.

“Almost like I never went through all that hardship.”

She breathed in and found she truly was below the Yokohama sky. The city air had the usual scent and the riverbank’s grass covered damp soil.

This same place had existed in the world she had just left, but this was the one she “knew”.

No, she had also known the place she had just left.

She suddenly remembered someone with whom she had just said goodbye, so she wiped her eyes with her school uniform’s sleeve.

And she realized something:

Shouko had designed that world, so it made sense that Kagami was enrolled at that school.

Oh, whoops, she thought when she found herself thinking of herself in terms of that world.

It had only lasted about half a year, but it had deeply influenced her.

She found it was evening. In her school uniform, she had awoken from a dream on the riverbank slope and she sat up.

She looked to the side and saw her sister sleeping in her middle school uniform.

She had not collapsed; she had fully surrendered to the sleepiness brought on by the warm sunbeam. It was cute how her knees were raised and held together as a remnant of trying to stay awake by holding her knees.

She could confirm the truth of what had happened once Shouko woke up.

And from there, the question will be whether or not I want to believe it.

Then she spotted a book between her and Shouko.

She first thought of the Book of Creation, but it was a notebook instead. She flipped through it in a bit of a hurry.

It contained the ideas for Shouko’s new story. Kagami saw designs for a few swords and weapons as well as terms like Normal Frame and Magino Frame.

As she flipped through it, a few tears dripped down and she laughed.

“How serious were you taking this, Shouko?”

But seeing that gave her memories more clarity.

She remembered the many battles and the everyday life, she smiled bitterly at her behavior, and she believed it all as true.

It was like she had had a long dream.

Yes, all of that had been real.

“Honestly…and when I have my entrance exam coming up this year.”

Just as she sighed to calm herself, she heard a sudden voice from the top of the riverbank.

“Oh? Then you’ll have to get studying, won’t you?”

It was a familiar voice, but it should not have been here. Kagami hesitantly looked back toward the top of the riverbank.

And she called the girl’s name.

“That nickname…! Are you sure you aren’t having issues with your memory!?”

It was not just her. Everyone from her memories was there: Hunter, Mary, Koutarou, the Head Maid, the other maids, Lisbeth, and more.

Mary looked her in the eye and gestured like she was opening a door. That meant…

…Did she unlock it!?

That was the technique that had once separately sent Kagami and Mary from one world to another.

Mary had made it her own.

And they were all laughing: “Ha ha.”

Horinouchi took a step toward Kagami and extended a hand.

“Look, Kagami. …This might make taking your entrance exam difficult.”

Kagami took her hand and looked in the same direction as Horinouchi: the sky.

Behind them, giant forms flew through the evening sky which should have only contained the city’s buildings.

A group of dragons measuring more than 100m long flew toward the ocean.

And while her sister started to stir and Fleur ran down the riverbank’s steps to greet her, Kagami turned her back on the evening background to face Horinouchi.

All the while, Devices resembling giant ships flew through the sky and traffic control witches blew whistles from the roads as they accelerated.

“It must have been the Book of Creation. …By releasing everything accumulated within it, the lost worlds can also be ‘taken care of’. Or that’s how I see it.”

“If there is more than one world, they can come together, influence each other, and become something greater than anyone could imagine.”

While the dragons roared in the sky, Hunter placed Dikaio on Kagami’s shoulder.

There was no moon in the sky. Was it just not out at the moment, or was it not there at all? As Kagami wondered if this was another form of influence, Horinouchi took her hand.

After looking over at Shouko who had woken, Horinouchi turned to face Kagami.

“Yes,” agreed Kagami. She only needed an instant to make up her mind, so she held Horinouchi’s in return and she spoke. “Let us continue. And if we are no longer needed, instead of throwing ourselves out or disappearing…let us move on to the next thing. That way, we will never reach the end, Horinouchi.” 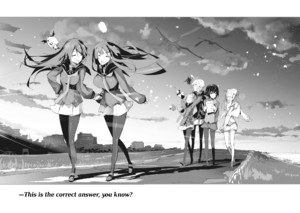 So without fearing anything, they pressed their foreheads together and smiled.

They had been thinking the same thing, so they nodded, let go of each other’s hand, and moved their arms.

They embraced. They stored something undeniable in each other and formed words.

“Now, let us move on to the next story…together.”

Oh, the rest of you stay quiet for now. Do not ruin the moment.

—This is the correct answer, you know?