From Baka-Tsuki
(Redirected from Dai Densetsu no Yūsha no Densetsu:Volume 3 The Trail of Ryner and Gang and The Standing Between The Countries)
Jump to: navigation, search 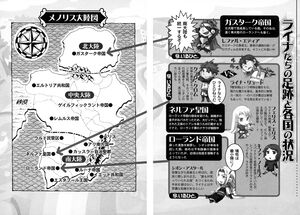 The country that has expanded quickly in the northern continent. It's name reaches far across the continent, even all the way to Roland in the south.

Refal: I shall also conquer the southern continent!

Currently being attacked by Roland Empire. Got into a pinch thanks to the idiot heir prince. Ryner, who's moving to save the remaining royal blood, Toale, is fighting Claugh from Roland's forces.

Claugh: Ryner is such a pushover

Bearing a special kind of eyes known as Alpha Stigma, and able to manipulate powerful magic. Fundamentally, a lethargic, languid guy...... supposedly but because of recent circumstances, he's becoming pumped up!

Partner of Ryner. Ultra beauty, skilled in the sword, and a believer in the Dango god. Has a delicate relationship with Kiefer......?

Roaming through various countries as a spy, but undertook Refal's request and returned to Ryner's side. Loves Ryner.

A country that, with Sion's revolution, arose out of the corrupted reign of the rotten nobles. Initially, it had a policy geared towards peace, but recently, it started invading its neighbours.

Hero King who was from a mistress of the previous king. Loved as a king by the people. Unable to choose the means to build a country where everyone can smile. Is bounded by a strangely fateful relationship with Ryner, it seems.

Sion: In order to minimize the sacrifices.