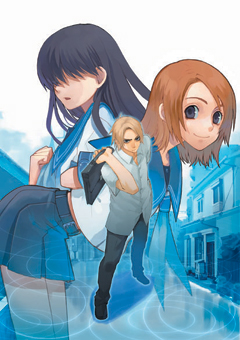 Denpa Teki na Kanojo (電波的な彼女) is a light novel series written by Kentarou Katayama, also the author of Kurenai. The illustrations are done by Yamato Yamamoto. Currently, the series has 3 volumes, and a 2-episode OVA has been released.

Juuzawa Juu, a delinquent high school boy, is ostracised by society for his looks and harsh mannerisms, but nevertheless enjoys his time alone. One day, he is approached by Ochibana Ame, who suddenly swears loyalty to him. She claims that she knew him in a previous life, and now wants to serve him as his "knight". Shaken by her proclaimation, Juu at first wants nothing to do with Ame, but after a classmate falls victim to a serial murderer, he accepts her help as he looks for the killer.