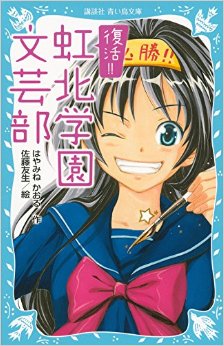 The cover for the Fukkatsu! Kohoku Gakuen Bungeibu light novel.

Main Iwasaki has just entered Kouhoku Academy, a middle school renowned for its literary club... or so it used to be. It isn't until the first day of school that she learns that the club has been disbanded due to lack of membership. Determined to be a member of the Kouhoku Academy literary club and passionate about writing, Main sets out to recruit five members for the club, but must do so before the deadline to submit new club proposals.

Those who wish to contribute are asked to first notify User:Otakumadness beforehand.