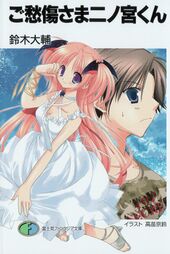 Goshuushou-sama Ninomiya-kun (ご愁傷さま二ノ宮くん?, Our Condolences, Ninomiya-kun) is a Japanese light novel series by Daisuke Suzuki, with illustrations by Kyourin Takanae. The light novel started serialization in Monthly Dragon Magazine on April 2005, published by Fujimi Shobo. As of September 2008, ten normal volumes under the title Goshūshō-sama Ninomiya-kun, and six smaller volumes under the title Oainiku-sama Ninomiya-kun have been published. and ran until January 20, 2009, a total of seventeen volumes have been published by Dragon Magazine. A manga adaptation was being serialized in the shōnen manga magazine Monthly Dragon Age. An anime adaptation by the animation studio AIC Spirits first aired in Japan on October 4, 2007, and ended on December 20, 2007, containing twelve episodes. The anime has been licensed for release in English by Kadokawa USA. The series won second prize in Fujimi Shobo's Long Fantasy Novel Contest.

Goshūshō-sama Ninomiya-kun's story revolves around Shungo Ninomiya, a male high school student trained in difficult hand-to-hand combat. He lives in a huge house with his older sister Ryōko, who is almost always gone on some dangerous mercenary mission. One day, his sister sends Mayu and Mikihiro Tsukimura, two siblings, to live with him to help Mayu overcome her fear of men. Unfortunately this is accomplished by making Mayu and Shungo share the same room and even sleep together in the same bed. Making things even worse, Reika Hōjō, the student-council chair, is blackmailed into becoming their maid due to a video that Ryoko recorded, in which she tries to seduce Shungo.

If you enjoyed the teaser, why don't you tell us in the Feedback Thread