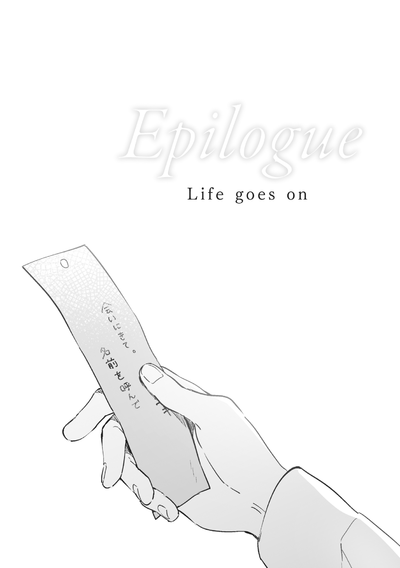 Encounters and farewells happen over and over again, yet we continue to head towards tomorrow.

And at the same time, we pray that someday, somewhere, we will meet that unfamiliar yet nostalgic smile again.

We met at the same old park.

After the race ended yesterday, Haruto told me to meet at a certain time, but I arrived a little earlier.

It is a clear spring, white clouds floating in the blue skies.

The white flowers were beaming on the branches, their iris redder than before. I read in a few books that the sakura flowers turning pink signified that is was wilting. I was ashamed to say that the moment I reached out to touch it with my fingers, a petal fluttered away.

“Ah, Segawa-san, you’re early. Did I keep you waiting?”

I heard the voice I was completely familiar with, and looked over to find a girl I had never met before.

She was not wearing a shirt, the long bangs were tied up by a clip. Most surprisingly was the fact that she was wearing a dress. I remembered her voice, and her face seemed familiar on a closer look. Typically, I would have asked for her name. But what I said was,

“You tied your bangs.”

“Nn. I think I can lift my head and walk without covering the front. That’s why I came to see you like this, Segawa-san, this is the real me (boku), no, me (watashi).”

Haruto was a little tentative, giving a bashful smile.

At that moment, many things clicked within me.

Haruto once said, “I guess it started a year ago. My good friends just stopped playing with me out of a sudden. I know why, but I can’t solve this. I really want to play with them, so I tried imitating them, but it didn’t work.”

Whenever Haruto and I were together, Taiki would scowl.

“This one’s different from us.”

“Shut up, you outsider. You don’t know anything.”

I chuckled. Seriously? That’s how it is?

Haruto and I did not know, and now, Haruto’s the only one who did not know Yeah. I was an outsider, and I knew nothing. It’s cruel, but it’s reasonable why Taiki would be glaring at me. He must have liked the girl Haruto, and that’s why they couldn’t remain as friends.

“Right, mind apologizing to Taiki for me? Just say sorry.”

“He’ll understand once you tell him.”

Haruto tilted her head in confusion.

“Nn. Let’s finish what we set out to do quickly. What do you want me to do, Haruto?”

So now I have to fulfill my side of the bargain.

Haruto fidgeted, handing over a pink paper. I received it, and had a look. It looked like a bookmark, but there was a line of words on the back,

There were cute, round, girlish words.

Just as its color would imply, the pink ‘wish’ gave a faint sakura smell. I guess it’s no bookmark, but a magpie bridge for Vega and Altair to meet and cross the heavenly river together.

“Please be my friend, Segawa-san. I guess you’ll be returning to college soon, so just visit from time to time. I want you to meet me, to call my name, to play with me.”

She was giving the yearning look of an abandoned pup, so naturally, my response is,

“I thought we’re already friends. I must be thinking too much.”

Saying that, Haruto looked at my face , and realized she was being teased when she saw me grinning.

So I apologized to the fuming Haruto.

“Sorry. Right, what are we doing today? Anywhere you want to go to?”

“Yes yes. I want to see some flowers. Can they come along too? Taiki, no, Tai-chan?”

Haruto’s feet quickly ran off, and the scattered sakura petals on the floor danced as she ran along, giving a layer of pink. I was about to call for her, but I noticed something on the pink ‘wish’ of hers. There was a name written at a corner, not Ha-Ru-To that would be expected, but two words. Speaking of which…

Haruto turned around, spreading her arms wide and outstretched as she tried to embrace everything on this world into her little clutches. Yes, if she did try to run forth and arrive somewhere, we would have met certain things, which were being collected by us at this point.

“Nn. Haruto’s actually my family name. My actual name is—”

The word that came out were the katakana written on the wish.

What she wrote next in the air was a kanji any elementary kid could recognize.

It was so simple that one would have difficulty realizing, yet it was within grasp.

And we reached our hand out, finally grasping the thing at the place we finally arrived at.

“So that’s why you have the sakura perfume on.”

Just yesterday, I scented upon a sweet sakura presence when I embraced her. It’s the same on this day; there’s a faint floral fragrance from her body.

“That’s because you’ve been smelling me.”

“I’m not doing that again.”

I’m not going to do that, especially after knowing that Haruto’s a girl. It doesn’t seem like she believes me though.

“Not exactly.. And it’s weird for you to say ‘that’s why’. The smell has nothing to do with my name.”

—For me, this floral fragrance is…

I clammed up. Whatever, I should just keep mum about this. This is a secret only I know, one the world once kept. Haruto gave me a confused look, wondering why I was suddenly silent.

The sakura petals fluttered in the sky.

“Hey, Segawa-san, thanks for looking out for me.”

The words went along with the breeze carrying the dancing petals, landing by my side. It fell deep into the human abyss called ‘me’, faintly melting away, becoming part of me.

I realized this was the line I was seeking since years ago.

So I began to think about these things. I guess being a teacher’s fine too, since it’ll be great to spend time with lonely kids like Haruto. I don’t want lonely people to remain alone.

My mind's starting to grasp what the necessity to that objective was.

Haruto bashfully called my name, prompting me forth, so I began to move forth.

And then, I yelled her name.

After so long, the two wishes on the pink slip were in my right hand.

I recalled a certain event in the long past spring. There was a sakura petal that fluttered from my palm, flying to a place I could not reach.

But this is different. I grabbed it firmly in my hand, so that I would not lose it, so that it would not be taken by the wind.

And thus, this will never vanish.

It will remain forever in my heart (here).

A certain person is harboring ‘wishes’, and now, I have conveyed the ‘hope’ that will last until a certain day, along with a reading of the word ‘happiness’. So, so then…

Yes, I will meet you. Definitely.

And then, I will call your name.

Spring. It is a season of farewells and encounters.

Henceforth we shall experience many encounters, and ultimately reach a certain person.

At that moment, I will surely smile to that person I am unacquainted with—

No. I will be saying this countless times, so this is what I shall say—

The smell of ‘Yuki’ will slowly fill my world once again.

And I firmly believed I had taken a firm step towards that future.