Hello, this is Mizuki Nomura. The fifth volume of 'When Hikaru was on Earth......' delves into the topic of 'Suetsumuhana'. In the Tale of Genji, 'Suetsumuhana' was a complete ****, but at least her inner heart should be very good, or not. She was a pitiful princess who did not know the ways of the world, nor knew how to read the atmosphere. She however became one of Hikaru's lovers, was summoned to his room, and never had any financial difficulties, living her own life happily, no?

This time, the ordinary version cover and the drama CD cover are different. For the ordinary cover, I requested not to show Beni's face. Miss Takeoka's illustration of 'imagining something that cannot be seen' was a masterpiece since the time we worked on 'Book Girl', and this time, I cannot help but be amazed when I see it.

The cover of the special edition is Koremitu's harem version. The original concept was that the flowers scattered around Koremitsu were meant to sense Hikaru's presence, but the idea of not letting everyone see him, but imagine him was certainly a brilliant idea.

The drama CD involves the story of Koremitsu and Hikaru going out to woo girls. I was in charge of forming the plot, supervising the scenario, and writing the extra bonus track. The plot is relevant to the story, but there were some lines that were different from the original script during the recording due to certain reasons, so regarding this, please be understanding. Regarding the issue of what happened between Koremitsu and Asai, Honoka and Aoi, these tracks and the following volumes will explain it clearly, so please be at ease.

I shall also be more in-depth with my explanation here! To all the readers, please hear out the drama CD filled with the beautiful voices of all the voice actors. Amazingly, the voice actors of the passers-by have taken part as main heroines of other works, and the policeman's voice does suit him well too. After the recording, it became a topic between the voice actors, the scriptwriter Miss Sawako Hirabayashi and me. Of course, the voice actors taking part as lead roles are brilliant too.

In the bonus track of this drama CD and the main story itself, there appeared the topic of panda. I wrote 'Suetsumuhana' during this January, and the additional script in May. It just so happened that during the recording period, I heard news of a panda being born, so it really was such great time. Though I was really delighted...I felt really depressed a few days ...my face turned blue with shock when I think back about it; the recording had already ended, but I thought it was impossible to write a panda as a kirin or a camel. Well, I guess I have to be sorry about that, and leave it as a panda. I wonder when is it that I can go to Ueno Zoo again and pray for a cute panda to be born again.

I shall be promoting some work here, and though it is not the right timing, and it had been a long time waiting, the first volume of 'Aoi' manga version is now being sold on the GANGAN Comics June version! The work and composition are really the best, and there have been lots of praises and comments about it. To the readers who have yet to read it, please do check it out. The Hikaru mini-character on the webpage is also extremely~ cute. Please do check it out too.

The second volume of 'Book Girl' 'Ghost' comic will be sold on August 22nd. The cover is about Hotaru and Kayano!

Also, I do apologize for keeping everyone waiting, but the second volume of 'Dress' will be sold next month, 29th September. Sherl and Princess Seria travelling incognito, Sherl (male version) visiting Annis' house, Prince Ryūjū's diary, the king's sweet fond talk, the blooming love with the princess. There are about 7 stories of them altogether, so please do remember to buy it. The WEB serialization ended without a hitch, and from this point, there are plans to publish them in pocket novels. Sherl's love affairs shall get more intense later on.

The sixth volume of 'Hikaru' is 'Asagao', and as the title suggests, it will be Asa's turn. That crossdresser who had yet to appear in the 5th volume will appear again, so please look forward to it too.

I shall see you next time then. 'Hikaru' at the end of the year, and 'Dress' in the coming month.

2005-2006, The history and culture musuem of the Safflower. affiliated library of Yamagata University. Available at: http://www.lib.yamagata-u.ac.jp/benibana/ [Accessed: 15th November 2014] 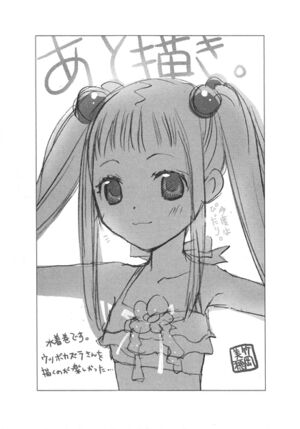 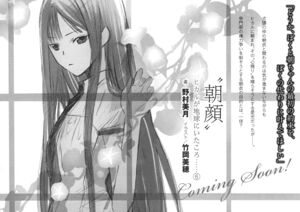