Special Chapter: Asai Saiga's Blunder ~ Just Who Is It That Believes in Santa Claus, Huh?[edit]

During her elementary school days, her dream was to be an archaeologist or an explorer.

To seek for unknown living creatures or relics, to continue to explore the world, how fascinating that feeling would be. That was what her immature mind thought and admired.

She wrote down everything she could think of in a schedule for her summer vacation.

Life was short, yet she had so many things she wanted to do. She could only look for a Tsuchinoko on the hills during this summer, fish for a kappa using a cucumber along the riverside, set up an antenna on the hill to call for a UFO, and check the skin texture of a snowman.

However, Asai was whisked off to the posh holiday inns in Switzerland, Canada, Karuizawa, and she was not pleased about this at all.

One of these days, let us go look for a Tsuchinoko together, Asa.

Let us help the kappas breed, and we can create a kappa-themed park.

Those were the promises she made to her younger cousin Hikaru.

(Such a foolish child.)

Now in the second year of High School, Asai reflected on her past coldly.

Currently, she was burdened with the duty of being the High School Student Council President in Heian Academy, and the eldest daughter supporting the Mikado's side family, embroiled in the complicated politics and power struggles in the family, an icy girl living in the harsh reality.

She had long forgotten about the time she had a cucumber on the fishing rod she leashed at the riverside and did not get anything after 7 hours.

However, the man she most hated at this point had his eyebrows raised, looking shocked as he said,

"I heard you believed there was a Santa Claus until your third grade."

(When was it that the Japanese summers started to become so hot?)

The intense sunlight was reflected upon the asphalt, and Asai's vision was filled with the swaying, sweltering heat as she walked down the shopping street.

No matter which street it was, there were young people of all types. Some were standing in the middle of the streets, blocking the way, some were standing around eating ice products and crepes, and some were making all sorts of weird noises; the scenery was in complete chaos.

(Why are there so many of these flippant people? It is certainly a mistake to stand out here in the summer heat and get drenched in sweat.)

Normally, Asai would pass by the crowds blocking the way with her head held high and an aloof look, forcing them to step aside and form a path quickly. However, on this day, Asai did not have the presence to intimidate them, for they did not notice her as they continued to chat away.

(...I am already like this after not sleeping much for 2 days. This is embarrassing.)

She remembered that for the past 2 days respectively, she had only slept for 2 hours or so.

Her daily chores had increased exponentially once summer vacation began.

The current candidate to be the head of the Mikado family, Kazuaki, was revealed to have forced Aoi to be his wife, and was forsaken by his clan. The Mikado family, Asai and Tōjō were involved and faced a severe crisis.

Though her preparations and plots went off perfectly, the unexpected duties and issues came one after another, and she was unable to proceed to the next step. Also, she heard that Aoi went to do some part-time work during summer vacation, so she often had to go to the shop to check on Aoi, feeling really tense, and not daring to relax in the slightest.

(I might as well make all the useless and despicable people in this world to disappear.)

While she had such terrifying thoughts as she staggered forth.

An unlucky flash of red suddenly came out of nowhere and entered her sights.

The clumsy fool in front of her called out as he knocked into her. Before she was about to be sent flying away, he reached out to grab her, and pulled her in.

A voice echoed in her ears,

"Your hair is really beautiful. I really am weak to a girl with such beautiful hair. I suppose the heavens are really cruel to let a cute city flower like you get injured by me."

If you are trying to try and get girls, do not look for me. Asai was about to wave this hand aside, but she was a little skeptical by what she heard.

She lifted her head and stared at the person. Was it her imagination? An illusion? No, it was a mind-boggling truth.

She then coldly retorted,

"...Yes. I suppose the heavens are cruel and also incompetent to let me meet a wild dog like you."

It was the vulgar, vile, foolish, wild dog Asai so hated–"Ack!" Koremitsu Akagi called out.

"Hey, I say, you're not looking very good now. Your feet are really unsteady."

"This has nothing to do with a perverted high school seduction master."

"Go to the park over there and rest for a while."

"I do not remember permitting you to call me that–"

Asai then waved Koremitsu's arm away as she sat on the bench in the park.

Koremitsu ran off to the drinking point.

Normally, she would not concern herself with such a wild dog trying to accost on the streets. Due to sleep deprivation and the summer heat however, she would feel dizzy whenever she stood up.

"Looks like I do not have a choice...I shall rest here for the time being..." Her frowning face closed its eyes, and she fell into a deep slumber.

It was an hour later before she woke up again.

She opened her eyes, wondering why this pillow was so hard and uncomfortable. The sidelong view of Koremitsu's frowning, slightly tanned face was closer to Asai's sights than ever, causing her heart to nearly cease to beat.

Did I actually fall asleep on this dog's shoulder!? Why! This dog is too stupid. Could he not have stood up and pushed me away?

"Why did you not wake me up? Such a useless man."

"That's not what you should be saying, right? You're a woman with no cute points."

Koremitsu gave a grumpy look as he spat back with saliva flying everywhere. At this moment,

"I heard you believed there was a Santa Claus until your third grade."

"And you sent letters to Santa Claus before Christmas, and you went out of the way to drop it in the mailbox? How did you write the recipient and address?"

She coldly retorted, but at the same time, she was completely rattled within.

(Why is it that this person knows about such a thing? Did Aoi tell him? Or did he hear that from Hikaru?)

She recalled that before she was in her third grade, she would request all sorts of presents from Santa Claus. She wanted the Swiss Army Knife or sleeping bags, necessities for an adventurer, but she would get antique dollhouses, accessories, or a basket full of tea sets for girls to use.

The worst of it all was during her third grade, early in the morning of Christmas; she found a gold card in her sock.

She was thoroughly shocked to know of this truth.

This Santa Claus is actually my parents?

And to add insult to Asai's pride, Aoi and Hikaru, who she assumed to be more innocent, had already known about this.

"You see. The one who gave me these Christmas presents is not a bearded old man, but a pretty madam or big sister."

"During Christmas, Santa Claus would come to our house holding a Christmas bag. They always tell me, ‘Look Aoi, this is Santa Claus’, but no matter how I look at it, it is papa dressed in a red suit and a fake beard."

Am I the only one hidden in the dark about this!?

This shame of a memory was etched deep within Asai's mind, and ever since then, she loathed both Santa Claus and Christmas.

That past of her was mentioned by this abomination of a person that she was sick of–the person who proclaimed himself to be Hikaru's friend and representative, Koremitsu Akagi. To top it all, she was teased by him.

And so, Koremitsu pointed it out as 'Asai's laughable past'.

"You wrote about going to catch a Kappa in your summer vacation schedule?"

"You talked about going for some cold endurance training so that you can climb a mountain and find a snowman, but you always stay in the house in winter because you always get colds?"

"You put a pie in the garden to lure out an Eel dog? So that you can eat together?"

Asai answered those questions with a cold face, ‘these are all things when I was young’, repeating this over and over again. Koremitsu however stared at her calmly,

"Aren't you quite cute in some way?"

This callous remark broke the limit of Asai's patience.

I do not wish to be called cute or anything by anyone in this world!

Her face searing, she gave Koremitsu a slap the next instant.

Koremitsu frowned as he glared back.

At that moment, a policeman just so happened to appear.

"This dog is a pervert."

She calmly stated as she pointed at him.

Koremitsu was whisked off by the policeman as he continued to lash at Asai.

It is best if I do not meet that sort of person who left me in a pig pen.

However, that man with the obstinacy of a cockroach will definitely appear in front of Aoi again after he is punished.

Once she thought about this, Asai's face was burning again, and she placed a hand on her reddened face, showing a demure expression as she whispered,

"–uu, I never believed in Santa Claus right from the beginning." 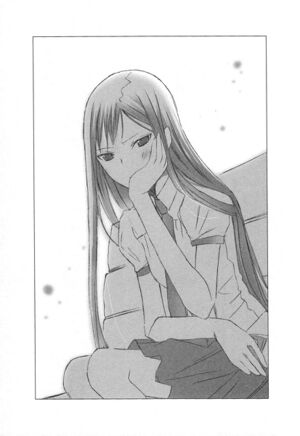