The character in this 7th volume of 'When Hikaru Was On the Earth...' is Utsusemi. 'The one who bore the child...' does have the image of 'Akashi', so I was wondering if I should have titled this volume 'Akashi' during the planning phase, but this is obviously Utsusemi. The first mistress in the original work Utsusemi left quite an alluring profile when she left only a veil behind.

Both Utsusemi and Asagao were women who rejected Genji, but unlike the Asagao Princess who had noble status and looks that set her at a higher bar that made her a mismatch for Genji, Utsusemi, who kept rejecting Genji while having conflicted feelings within her was much a much more realistic target. Rereading it again, the feelings of bitterness continues to gripe the heart, and it really is wonderful. Utsusemi is not as glamorous as the Highness Murasaki and Oborodukiyo, but I do think she is a woman that is more flavorful when experienced more.

And so, the theme of 'doing it...' was determined to be 'Utsusemi, with some elements of 'Akashi' mixed into it. Miss Takeoka's character setting of Sora is simple yet somewhat cute, a perfect compliment to the impression given in the work.

Sora really likes to drink green tea in this story, and makes grapefruit fresheners. However, there is a limit to the amount of caffeine and aroma to take in based on the actual pregnancy situation, so please be careful when intaking them!

There was a rash of baby boom for a certain period in my workplace, so a lot of people tried doing different things for the sake of the babies. There were some who had the photos of their babies stuck in a corner of the room, and they all look so round and cute, the room became the healing spot in the workplace.

Getting back on topic, I did mention in the previous volume 'Asagao' that this series will be progressing into the latter half. That will imply that the story will be ending in 12 volumes, so there was a lot of confusion...I do apologize for this. The latter half does include 'Asagao'. There is a total of OO volumes, and so, OO volumes are expected to be left. There will be lots of disruptions and events happening while I continue to write, so currently, the details are a little vague. I do wish to write when the release dates will be, but I cannot be certain until the official release, so I do apologize for keeping things vague. The original draft ends at OO voolumes, so I have to wait patiently while I check with the HP brand under Famitsu Bunko.

As for Koremitsu's love, it will be a royal rumble beginning in the next volume. Relating to this, there are many readers who mentioned something they were really puzzled with right from the beginning. Why is Kotobuki from 'Book Girl' so similar to Honoka? Perhaps it is because the narration of their appearances make them appear to be tsunderes, no? Personally, I wanted to write a girl with a completely different personality and habits, so I was troubled by it. If I have to say, Honoka should be similar to Kotobuki's friends, Yuuka and Mori.

There seems to be a lot of readers worried if Honoka's love will end up like Kotobuki's, but 'Book Girl' and 'When Hikaru Was On the Earth...' are two completely different stories.

And before long, please continue to read on to see who Koremitsu finally chooses.

No matter who matches up, or not, please continue to watch on with kindess.

The next volume, the 8th, is 'Hanachirusato', themed around Michiru, but Koremitsu does have his own troubles with other girls, and at times, he will remain still, while at others, he makes up his mind. The volume is expected to be released at the end of summer vacation, so I hope to meet you with again. 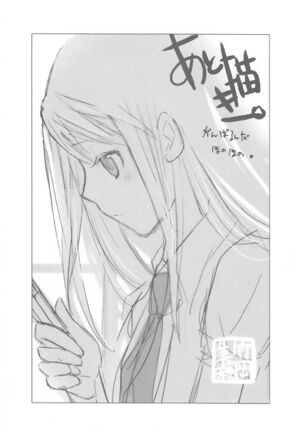 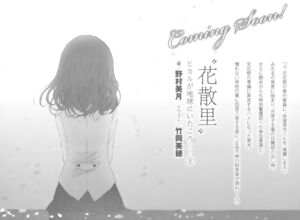