“Eh!! So, the matter about Hikaru's child being born is completely false?”

Once Tsuyako said this, the underclassman Koremitsu Akagi puffed his temples weakly, and clearly stated,

“Yeah, Sora isn't pregnant. Sorry to make you worry so much over Hikaru's kid, senpai.”

And then, his ruffled red hair drooped along with his head.

It was after school. Tsuyako, dressed in a pale green Furisode with red sakura decorated all over it for club activities, collapsed butt first onto the floor, her shoulders slumped weakly.

“How terrible. I did think of 50 names for the child, and I already requested for a designer I like to design.”

To Tsuyako, Hikaru, who had long died, was like a glowing moon in the sky. This round, elegant, and bright moon shone itself fully onto the flower called Tsuyako. He was her eternal lover.

Once she learned of a baby that would inherit Hikaru's bloodline, she broke down in tears, delighted due to her overwhelming emotions.

However, this was all.

And Koremitsu, Hikaru's stiff-face friend, could only watch this utterly devastated Tsuyako and contort his terrifying face, his eyes glaring everywhere as he muttered.

This vicious-looking delinquent king Koremitsu was shunned by the other students, deemed a wild dog. His true personality was actually an extremely kind boy, and surely, he felt that he bore a huge responsibility.

Tsuyako remained seated as she slowly lifted her head, and sounded a little miffed as she said that.

“What are you saying now?”

“I am saying this because it happened. Now that it is like this, what can I do?”

Though a little flabbergasted, Koremitsu sat down with his face blushing.

Koremitsu closed his knees together tightly in an overly serious manner, and Tsuyako leaned her head on them, causing him to widen his eyes in shock.

“A lap pillow. Hikaru often gave me this treatment once I am worn out from my Japanese dance practice.”

“He actually did such gaudy things!?”

For some reason, Koremitsu glared at the roof, yelling.

“After Hikaru played with the girls during the day, I will do this for him as well when his legs are fatigued and wobbly.”

Again, he glared at the roof.

“Mr Akagi, your knees are stiff and uneven. Hikaru's knees are so tender, they make one dreamy.”

She continued to pretend to sleep.

“You have yet to console me. Now I am so lethargic due to the shock that I cannot get up.”

“Then what am I supposed to do?”

“Caress my hair, and then praise me saying that I'm the most charming woman in the world.”

“If not, I will continue to remain like this. Miss Shikibu will come looking for us. Oh, remember to caress the hair tenderly.”

In contrast to Hikaru's delicate fingers, Koremitsu had bony, clumsy fingers, and the latter placed one down a few strands of Tsuyako's hair, before moving the entire hand.

(This hand is so large and full of bones, so hard...yet it feels so tender...it certainly has Mr Akagi's flair.)

There was the scent of sweat, and a noticeably faint scent of ink, coming from Koremitsu's body.

Unlike Hikaru's sweet scent, Koremitsu's was a little repulsive, but it was a mixed scent that would cause one to feel comfort—a masculine scent.

And he kept stuttering, ostensibly struggling.

So strange yet cute was his words that Tsuyako bit her lips hard to contain the impulse to laugh.

And on the other hand, her heart gripped when she recalled the rich sweet voice Hikaru used to say to her so fluently, 'you are the most beautiful red weeping cherry blossom in the garden, Tsuyako'.

The owner of the garden was more dazzling than anyone else, so much of an infidel, yet so devoted...

“Do you know...back then, I was really, really delighted, to learn that Hikaru's child would be born into this world.”

She turned around on this lap, and turned towards Koremitsu, curling herself as she whispered.

Koremitsu, who had been caressing her hair all this while, paused. He then continued on again, but the effort this time was more tender and delicate.

“I was really delighted...to be able to see a child inherit Hikaru's blood and protect him from up close.”

“I was thinking that I can send some cute Ubugi when he visits a temple. I would have given blessings for the Peach Festivals or the Dumpling Festivals, I just felt agitated whenever I thought of what sorts he would be wearing for Shichi-Go-San. If it were a girl, I would have gone shopping with her, and if it were a boy, I would have taught him how to be an escort for girls, and dance to add on to the fun...”

“...Senpai, how old you will be at that time? Could you complete a song without panting then? Either way, you're thinking too far.”

Koremitsu retorted with a serious face.

“This is the time where you should be saying 'you're an eternal dancing princess, senpai'.”

“No, gramps back home keeps yapping that he's still working, but his bones just ache like bad whenever winter comes.”

(Have you associated me with your grandfather, Mr Akagi?)

(I cannot allow myself to be belittled any further.)

Tsuyako again turned towards Koremitsu's face, widened her eyes to look up at him in a mesmerizzing manner, and leisurely opened her lips,

“You never experienced anything other than a kiss, no?”

Koremitsu widened his eyes as he looked down at Tsuyako. He then stammered,

“Th-that has nothing to do...with this now, right?”

“If you are willing, Mr Akagi, I am willing to be your first time, you know?”

Koremitsu's face was blushing so much, he was at a loss of what to do.

“How about it? Am I not enough to satisfy you? I will keep it a secret from Miss Shikibu, you know? Of course, that applies for Miss Aoi and Miss Asai.”

She narrowed her eyes at him. Resting on Koremitsu's knees and the floor of the clubroom were the red hair curled at the tips and the radiant sleeves dyed a bright blue, dancing along with the red sakura in the air.

And at the next moment, Koremitsu raised his eyebrows, chiding harshly.

“I can't make a joke about that, senpai! If it's someone as charming as you, I'm a little shaken even if I know it's a joke! I don't have much restraint myself, so won't it be bad if I'm to take action in this mood!?”

(Mr Akagi, those words are truly irresistable to me.)

And Tsuyako's face was sizzling red.

(I really have to hand it to you.)

She wanted to tease this immature, cute underclassman of hers, only to end up blushing instead.

(Hikaru, your best friend really is not to be underestimated.)

And Koremitsu seemed delighted as he snuck in a smile, before curling his lips into a frown again.

As that overly serious expression was too strange, Tsuyako placed her cheek on the stiff knees, letting out a chortle that got increasingly louder.

“Hoho, of course I know. I will not be joking the next time I approach you, for I will be for real. In that case, I will be mentally prepared to be attacked by you.”

Since she could not longer watch over Hikaru's child, she would instead watch over the boy Hikaru recommended.

Mr Akagi, who exactly will you fall in love with in the future?

Amongst the girls who were mesmerized by your devoted, clumsy, determined tenderness, who will you choose in the end?

As I am told off by this underclassman who likes to carelessly dampen moods, I shall continue to observe from now onwards.

If you are to continue saying those words with such a face, perhaps even I may accidentally fall in love with you. 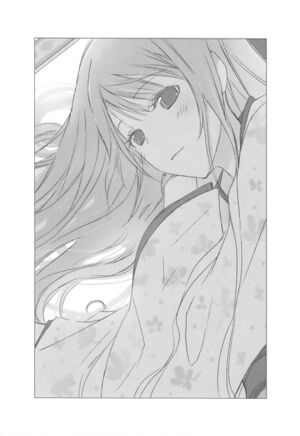