The 8th volume of ‘When Hikaru Was On the Earth…’ is about ‘Hanachirusato’.

The Hanasato in the original work is not exactly a beautiful woman, but has a beautiful soul. She is an outstanding, conservative woman, and at the same time, apt at reading the mood, earning the trust of Genji. In the chapter of ‘Hanachirusato’, Genji was filled with comfort and relief when he visited her, and his soul was practically cleansed.

She was not one to arouse others as a woman, but surely one would find solace when being with her, no? She was requested to be the stepmother of the recently born Yūgiri, son of Her Highness Aoi, and though this proved that he did prioritize her amongst the many wives Genji had, he was afraid that Yūgiri would end up like him, falling in love with his stepmother. He chose not to allow Yūgiri to meet the beautiful Highness Murasaki, yet he did not have such worries when it came to Hanachirusato. How rude.

Though Hanachirusato herself took care of him as a kin, Yūgiri did find her relatively unpleasant appearance to be particular grating, and told his father that the latter placed particular importance in Hanachirusato as a wife because he was being too kind; that truly was something rude to think about…

That probably was the flow of things, and after reading ‘The Last Love of Prince Genji’ in the ‘Oriental Tales’ by Marguerite Yourcenar, I cried upon feeling how tragic Hanachirusato was. Please read it along with the original story.

As a change of topic, there are times when an author will subconsciously make use of a particular issue over and over again. In my case, one of the ideas was the ‘switching of the light bulb’. I had this pointed out to me after I was done writing, and woah, was I blushing. I do remember it being 3 times or so, or maybe there are more of such things which I don’t remember. As for why I like to use this, that’s because a few years back, my pet peeve was changing the light bulb. There is a cover on top of the 5 light bulbs lined side by side, and I could not remove it very well, so I spent an hour, practically in tears, fighting against this cover. Also, the ceiling is too tall, and it is difficult for me to work! I will stack a chair on the table, and the day after I maintain a banzai position, my back and neck would really hurt, so I had to adjust my body. Whenever the fluorescent lights break down, I will look to the ceiling and pray that it does not break down again, and I would really black out when I begin to work. Well, it appeared in this work. The lights have changed nowadays, and compared to the past, changing lights is easier right now…or that should have been the case. (the fluorescent lights I have been using the past two years have not failed, so I am not certain if it was changed, “It’s fine!” but the renovation company put it this wa. On a side note, this is not because I had no other troubles. There are bigger ones!)

The next volume, Rokujō, is slated to be sold at the end of this year. This series will end once the next two volumes are printed. As the ‘Hikaru’ series is well-received by the readers, the sales figures are stable; I was able to begin writing earlier than planned, so I had finished the epilogue in the prior autumn, and I will be headed into the next series.

I had completed the 1st volume of the new series in Spring this year! It is slated to be sold after the final volume of the ‘Hikaru’ series. The theme is actually about the recently popular ‘vampire’, and I am worried if it is getting too popular when it is sold. I suppose it will be really busy given that I am writing such information in the afterword.

First off, there will be ‘Rokujō’ at the end of the year and the 4th volume of ‘I’m a royal tutor in my sister’s dress’, and again, I will like to ask of everyone to take care of me again. 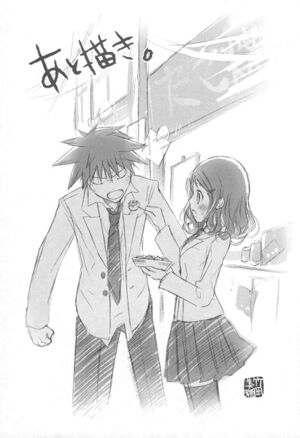 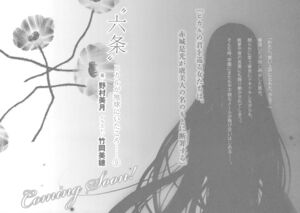