Special Chapter: Asai Saiga's Miscalculation ~ You're Too Bad at Sympathizing[edit]

Asai Saiga had always assumed herself to be a cerebral woman.

She felt that she could use this cerebral mentality of hers to command others as she pleased.

“...But why is it that it simply does not work on that person?”

Appearing in her mind was that galling underclassman of hers with a lush red hair, sharp eyes, the rash presence of a mutt all over him, and she frowned hard.

“Now that was fast.”

While Koremitsu Akagi opened the door to the student council office, Asai coldly faced him as she muttered.

“Aren't you the one who asked me to hurry over? What's the problem? I can do anything for you right now.”

She did anticipate an anxious figure appearing in front of her after being summoned through the public announcement system, but Koremitsu in turn was abnormally enthused. There was no way this person would have been delighted to be summoned by Asai...

Koremitsu's lips and eyes were showing delight after all.

The list of what Asai wanted him to do flowed through her mind in that instant.

(What exactly shall I make him do...)

She raised her eyebrows, trying to ponder over it. However, rationality overcame her immediately, and she coldly said,

“I suppose not. I am still not that deplorable to a point where I need you for assistance.”

“You really aren't being cute here. What do you want?”

Yes, she had given him too much leeway. She could no longer let him continue with this insolence, or rather, to make sure he did not view her as an enemy, and to cultivate his goodwill and respect towards her, before he would be eventually controlled by her—

While Koremitsu curled his lips, Asai folded her arms presumptuously, as she said,

“Mr. Akagi, I hereby command you to be part of the culture festival special security group.”

And thus, her chances of interacting with Koremitsu would greatly increase with the veil of work. While Koremitsu would stumble his way through the work, Asai would then follow nonchalantly, force him to recognize her ability, and gain a favor from him

(I suppose it might be very interesting to tease Mr. Akagi with words when he fails.)

And as she continued to secretly contemplate about this, hidden under that stern expression of hers was a minuscule, probably even a speckle's worth of expectations hopping inside her.

“Do you know what day is it today? Mr. Akagi. It is 2 days before the culture festival.”

Asai anxiously summoned Koremitsu through the school's PA system, and yet Koremitsu did not rush over to her, for he, completely overwhelmed by his class and Japanese Dance Club events, did not pay any particular heed to the work Asai tasked him,

(What is with that feeble apology? You made me wait so long. The same thing happens whenever we talk about Hikaru; is there not a more dire topic we have to talk about? It feels like you are deliberately trying to avoid the topic whenever I mention Hikaru...)

She got furious, and inadvertently frowned.

“I suppose there is quite an anomaly for you to actually apologize to me directly.”

“That's not it, alright? Even I'll apologize to anyone if I offend that person. I'm already extremely busy with the stuff in my class, and I admit that I forgot all about the special security group.”

(He really did forget about all...)

She clicked her tongue.

“Well, I will not be commending you for that.”

She really had the impulse to give him a cold lashing, only to think through rationally,

“Well, it is a good thing to be able to reflect on yourself, if you do not repeat the same mistake over and over again.”

And she did a slight dig at him.

Asai then gave Koremitsu an enormous amount of work instructions, and while the latter grumbled, he finished them obediently. The fact that he did not simply give lip service, but actually backed up his talk, was firmly recognized by Asai. When Koremitsu remained wary against Kazuaki, and had a private conversation away from the mother,

“Ohh! You're rather reliable, Asa.”

His face immediately broke into marvel.

She loosened her lips, and turned her head aside.

Everything went well till this point.

Only that things went wrong afterwards.

Once she asked, Koremitsu hollered with extreme insanity, “Not at all!”

Surely he would not have reacted so violently if it was right on the mark. While Koremitsu continued to excuse himself with his eyebrows raised, face flushed, temples pulsating, his actions completely defied his words, and Asai faltered again once she realized this Koremitsu could no longer control his own emotions.

(Wait, did he actually fall for Aoi?)

Koremitsu had been taking good care of Aoi till this point, and tried his best to be gentle to her. Though Asai herself refused to admit it, he had been very gentlemanly towards Aoi. Asai had been pondering if Koremitsu intended to be Aoi's knight in Hikaru's place, yet she believed that Koremitsu would not do anything to Aoi, Hikaru's ex-fiancee.

And yet he was being so flustered over Aoi!

While he continued to deny it, he was practically confessing that he was head over heels with regards to Aoi, and that he could not help it.

(It is vexing. Why is my heart hurting so much? My nervous system should be flawless. Ahh, yet it really hurts.)

And after Koremitsu hollered for a while, he regretted it, and calmed down.

“I shall pretend that I did not hear your words then.”

Asai stubbornly hid the pain in her chest as she watched Koremitsu dangle his head in agony.

Yes, forget about it. Pretend not to hear it.

And it had to be Aoi of all people!

(No, perhaps he never noticed my true feelings till this point. I just need to divert those feelings to someone else. Yes, that is how I should do it. Him being with Aoi will only lead to misfortune. I in turn is able to establish a rational, appropriate relationship.)

“Mr. Akagi, do you understand why I placed you in the special security group?”

“Because you hate me? You want to cause me trouble?”

Asai raised her eyebrows at Koremitsu's instantaneous reply, and held in her fury,

“You are the only boy I allowed to call me Asa.”

“Yeah, you don't have any friends in the first place.”

How was it that this man just could not read the mood?

Having stating everything so plainly till this point, he still remained so oblivious!

And Asai let out a sigh from her lips,

“I still have a lot of documents to read through.. Since I have no time to continue chatting with you, please head out.”

For some reason, she was feeling lethargic.

(Is Koremitsu Akagi a dog after all? I cannot convey human language to him?)

No, there was still a chance in the culture festival.

And Asai Saiga was not a weak-willed woman to change her own objectives.

On the day before the culture festival.

Koremitsu's class misused the sprinkler, resulting in the tools to be used for the culture festival soaked by the water.

Koremitsu pleaded with Asai for help, and Asai immediately deployed a large number of people to salvage the scene.

“I shall be looking to reclaim this debt another time, Mr. Akagi.”

The agony lingering in her heart finally dissipated.

“Yeah, I don't mind anything, even if it's a Santa Claus cosplay.”

He actually stated that personal matter so brazenly in front of everyone. Such a useless person; yet when she stared back coldly at Koremitsu, there was no sense of disgust with him.

The relationship between those two would definitely become stronger during the culture festival on the following day.

On that day, Asai's cellphone received reports regarding Koremitsu one after another.

“Koremitsu Akagi managed to settle down a sudden dispute between girls in front of class 2-3. Both of them fell on their butts, and one of them got scared off by him.”

“Akagi's protecting a lost girl—ah, I think they found the mother. She thanked him, carried the child, and ran off.”

“This really is amazing. Everyone was worried what sort of nonsense Akagi will cause when you recommended him, president. That Akagi really is impressive. His light footwork and sharp eyes really make him appropriate for this job!”

“...Of course. I did personally choose him after all.”

It was a good thing that Koremitsu's standing in school was improving, and Asai was proud of it. However, Koremitsu was running about everywhere, and Asai too was so busy that she could not leave her position, so neither managed to meet each other once.

That should have been the case...perhaps she should call him through the PA system again.

(No. If I am to use the same method again, the effect will weaken, and I will be underestimated.)

While Asai remained bitter as she thought about this, time gradually passed by.

Once she learned from a student council member that Koremitsu was at the Japanese Dance Club's juice stand wearing a white coat and glasses as a waiter.

(White coat? With glasses too...!? They really do not match.)

She was a little shocked.

Yes, she wanted to personally see how unfitting that was...

And with such a reason, she moved towards the juice stand.

“Oh, Miss Asai. I do apologize, but Mr. Akagi just so happened to leave. If only you were here 30 seconds earlier.”

Asai was left speechless in the face of the vexing declaration by the president of the Japanese Dance Club, Tsuyako.

“If you want to, you may come in. This is honey juice with banana and blueberry mixed in. Your courage to fulfill your love will rise once you do drink this.”

I have no need for this, and I do not need you to worry about my personal worries after chiding the smiling Tsuyako, she took the plastic cup filled with juice from the latter's hand.

(And so...I never managed to meet Mr. Akagi after all.)

Once the closing ceremony ended, Asai remained alone in the student council office, giving an icy look at the back of the chair right at the desk.

That Koremitsu Akagi was probably holding hands with his classmate, Michiru Hanasato, having their own date on their own whims. It was not Aoi, not Honoka Shikibu, but the plain girl with braids and glasses till the end of the first semester. Her charms and intellects were far inferior to Aoi and Asai, and even Hikaru did not do anything to that girl.

Koremitsu was probably dating Michiru Hanasato at this point. No, surely there had to be a reason why he had to do this, like before. She will soon coerce a confession out of him soon.

Yes, she will again call out for Koremitsu again.

The cup of juice she received from Tsuyako remained untouched in a corner of the table.

This juice that fulfills love is definitely a bogus. After all, I do not have anyone I like till this point

She snorted condescendingly, and reached for the cup, using the straw to suck up the juice with its fruit fibers at the bottom of the cup after being left for so long. 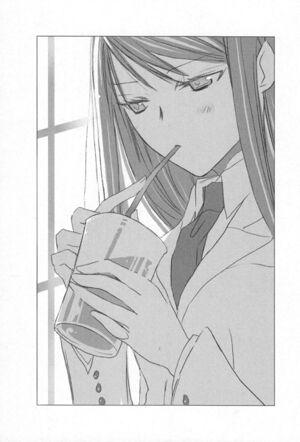