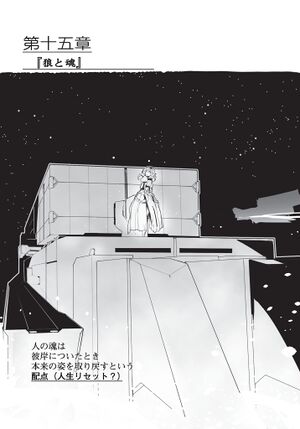 Reaches the other side

It is said they regain their original form

Suzu heard two auditory changes while wiping out the inside of a locker in the bathhouse’s dressing room.

The first was the blaring alarms gradually going quiet ship by ship.

She had been able to sense those vibrations and booms with not just with her ears but her body, skin, and soles of her feet, but now it was gone.

“Heh heh. My foolish brother and the others must have done something.”

Kimi crawled out from the blanket on the dressing room floor.

She took a breath, folded up the blanket, and put it in a basket. And…

“Everyone is sure to celebrate either here or at the Asama Shrine. Want to join us if it’s at the shrine, Suzu?”

“Isn’t that obvious? If a ghost has a regret, the best way to let them rest in peace is to clear away that regret. But in that ghost’s case…” Kimi smiled and nodded. “Now I see why my foolish brother wanted her to meet Mitotsudaira. Shall we head on up? From this distance, you should be able to sense something beautiful with your entire body. I will faint afterwards, though.”

Adele saw the cannon fire from both sides suddenly end from her position at the harbor on Okutama’s stern.

Everyone on the deck there held their breath and did not dare move when they noticed the sudden change.

…Did something happen to stop the attacks?

She had heard the Asama Shrine was working to resolve the battle from the other night. The others would have heard too and she could see some of the others glancing around at their surroundings.

“Everything has quieted down, hasn’t it?”

That divine transmission comment arrived from overhead behind her. Naito and Naruze sent word of the situation while they waited with the other delivery workers above the defense barriers surrounding the area behind the academy.

“No new fleet has appeared and I don’t see any light from an ether disturbance. Everything has stopped.”

“That must mean…yeah, there it is. Look to port.”

Adele did so, thinking she would only see the dark sky, but…

She saw the kind of small transport ship only used to move between the Musashi’s ships. The four of them were less than 30m long and old enough that they should probably just be abandoned. Another, newer ship seemed to be pushing them slowly to the east.

…They’re on their way to the Imagawa fleet.

The bows of those ships were loaded with wooden containers, but the one in the rear also contained two people. One of them was…

The other was a woman Adele did not recognize.

Since she seemed to glow in the dark, she was probably a ghost.

The transport ships carrying them and the cargo were headed into the eastern sky, but eventually…

Naito was correct. The five ships had stopped at a point in the sky.

“Asama, is this point good?”

“Yes, based on our records, that is the area at which they were destroyed. Well, the actual area is spread out over several dozen kilometers, but that is what you can call the entrance. So,” she continued. “Return to them the ‘spoils of war’ you retrieved from the war memorial.”

These transport ships were loaded with the spoils of war stored at the Totomi war memorial.

“This was originally Imagawa land. Constructing a memorial to Oda’s victory is one thing, but how are their spirits supposed to rest in peace when their belongings were stolen to commemorate that victory?”

“Returning those things to their rightful owners should eliminate their regrets about this world. Since this will allow the Imagawa forces in this area to all rest in peace at once, taking those spoils of war from the memorial qualifies as a public good. Our shrine and the Student Council will probably have to do some arguing on the political front about that, though.”

“Sorry about all the trouble,” said Mitotsudaira before looking to the person standing on the ship’s bow.

She had never spoken with the woman, so it was not like they really knew each other. Still…

…We are the same.

She had been at the mercy of forces outside her control. If she had survived, Mitotsudaira may have gotten to know her somewhere in a few years’ time.

But that was exactly why she had to call out to her.

Mitotsudaira saw the woman turn back toward her.

She had tanned skin and brown hair. She had a gentle look to her eyes, but since she had been deployed out here with an awareness of what that would entail, she had to be a strong person on the inside.

She had been prepared for what was to come, unlike Mitotsudaira who had been sent to the Musashi when she was too young to really understand.

She had chosen to leave this life with the Imagawa soldiers.

That raised a question for Mitotsudaira.

She did not know. The only way to find an answer was to create one for herself. So…

“Oh? What is it?” he responded via divine transmission. “I’m watching.”

She knew he was. But she had something else to ask.

“Do you have anything to say to her?”

Would his answer to this be something he would eventually say to her as well?

Again, she did not know.

Everything was such a mystery and there was no changing that. Meanwhile, his response arrived.

“ ‘Congratulations’. That should be enough.”

Mitotsudaira nodded at what that meant more than the word itself.

That woman had been trying to get where she was supposed to be and she could finally do that.

If Mitotsudaira herself ever managed to fully join her king and the others, he would probably congratulate her in the same way.

She breathed in and looked around her.

She viewed the heaven and the earth and saw someone who had decided where she was headed.

As the one seeing the woman off, she had to fulfill her duty here.

“Asahina Mototomo. My king just sent his congratulations regarding the completion of your journey.”

She must have realized this was the end because she got down on one knee.

She was a knight. That had never been explicitly stated, but she had been sent here by the Testament Union and the large sword at her hip was hard to miss.

She had just learned that Mitotsudaira had a “king” who she served.

Mitotsudaira had just one thing to do as her king’s agent here.

“As a representative of the Far East and Musashi’s 1st knight, I have a message for Totomi’s knight,” she said. “Your position as knight has been removed. You are now free.”

Asahina responded by grabbing the large sword at her hip with both hands.

She held it up and Mitotsudaira took it. And then…

The sword slowly came apart. It became particles of light that scattered like sand. And…

Asahina stood up and the same slowly happened to her.

“Mito, everything binding her here is gone,” said Asama via divine transmission. “Please see her off.”

Mitotsudaira took Asahina’s hand and guided her toward the four transport ships up ahead. She had Asahina board the ships carrying the belongings meant for her fellow warriors.

The woman said something to her with a smile.

At the same time, the connection to this ship came undone and the other four ships began to turn east.

They began slow, but they gradually picked up speed as if riding the wind.

Asahina had had a clear face and expressions before, but her appearance was growing much less distinct.

She looked so small by the time she joined the Imagawa fleet, but she did bow back toward Mitotsudaira. Or it looked like it.

A moment later, a great light appeared in the eastern sky.

Once the ghost fleet was rejoined with their final member, they scattered with their stolen belongings returned.

Everything rose into the sky and came apart in the atmosphere.

But that was not all.

“Whoa, it’s happening to the southeast too!”

Naito’s surprise there was understandable. When the Oda ghost fleet to the southeast saw what had happened, everyone on their decks threw their hands into the air and spelled out a word with their bodies.

“Oh,” said Asama. “Now that their opponent is gone, they too can finally end their battle. Both sides of the conflict at Totomi have been purified and returned to their rightful form according to Shinto.”

The Oda fleet had begun to scatter as well.

A woman was singing.

Who did that humming voice belong to?

It sounded like a regional song from western Europe, but she may have been imagining that.

That night, everyone from their class ended up gathering at the Asama Shrine and throwing a party.

As far as Naito remembered, Mitotsudaira had stayed near her king and been very quiet, without bragging or anything. But on occasion, she would search for and read through some historical information.

But once everyone had managed to relax some, her king unhooked something from the hard point part on his lower back and handed it to the wolf.

It was a paper bag. When she took it, Asama smiled in a “my, my” kind of way.

The wolf looked inside and found…

It was a uniform’s right sleeve. It had even been embroidered to match Mitotsudaira’s uniform. 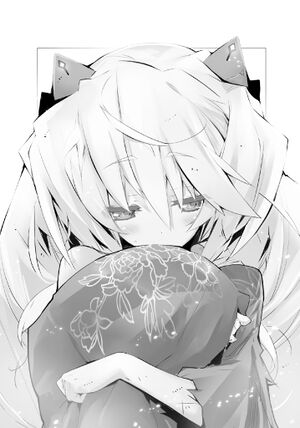 “You threw yours out cause it was too badly damaged in the previous fight, right? I felt bad about that since I asked you to do that, so I had Bell-san fix it up for you.”

“Wait, were you out searching for my sleeve at the site of the battle when you met Asahina Mototomo?”

He smiled bitterly and the wolf smiled while holding the sleeve to her chest. And…

“But my other sleeve is a mess now too.”

“Do you mind if I only pay half of the repair cost? Your uniform is pricey.”

Suzu said that with a smile, so that settled that. While the others looked over or scooted over curiously, her king ate some food and told them all about what had happened over the past few days and at Totomi.

But part of the way through, Asama suddenly tilted her head.

“Eh? What is it?” asked Mitotsudaira.

“Well,” said Asama with her head still tilted. “Totomi, and Imagawa land in general, is closely connected with the Asama Shrine, so I get that the war memorial is part of our territory. But.”

“Well, you two said you visited an Asama Shrine affiliate at the Totomi war memorial. I was hoping to thank them for their help in all this and looked into it, but…it doesn’t exist.”

Those two tilted their heads forward and Asama asked for clarification.

“Where did you go, who did you meet, and what did you see at Totomi?”

When Kimi heard that, she collapsed onto her side with some fried chicken still held between her chopsticks.