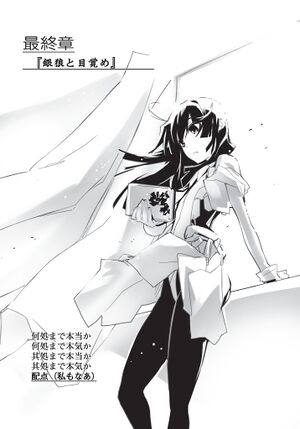 How much is true?

How much is serious?

Is that much true?

Is that much serious?

Point Allocation (For Me Too)

Is the wind blowing through the sky above real?

With her black hair fluttering in the classroom window, Masazumi shut the book that ended with that line.

It was their lunch break.

The window was open and the curtain was blowing in the wind. She brushed up her bangs while glancing to the back of the classroom.

Asama, Horizon, and the idiot siblings were there. Mitotsudaira was sleeping with her head resting on her crossed arms.

She must have been fast asleep because she was not waking up even as the idiot sister braided her hair and attached ribbons.

Masazumi stopped her hand on the curtain.

“It makes sense. We did stay up late last night talking about what happened last.”

“You people have some exciting lives.”

“What makes you say that?”

“Well, that story from last night tells me you were involved in some exciting stuff even during middle school. And the more I hear from you, the more frequent those types of stories seem. I have almost nothing like that myself.”

“It’s not as fun as it sounds in stories,” said Asama.

Masazumi beckoned her over, so Asama walked over while asking “Me?” Once the footsteps stopped in front of her, Masazumi asked a quiet question.

“You ended last night’s story in something of an occult way, remember? But that was a lie, wasn’t it?”

Asama’s eyebrows rose and she eventually slapped Masazumi’s shoulder with a smile.

“No, it was true. Completely true. You know what I mean.”

With that, Asama returned to the others. Since she waved her hands side to side in response to a question from the idiot, Masazumi could guess most of them had realized it was a lie.

…If we don’t make those events at Totomi sound like a silly story, then we’re admitting that the Mito Matsudaira name inheritor clashed with the Oda clan.

Those people never considered the consequences, but that may have been why they developed such a strong mutual give-and-take policy.

Masazumi felt certain her guesses were the truth here.

Everyone had their own past and everyone would have skeletons in their closet to some degree or another, but those skeletons would create yet another version of the past.

And our class seems like they have more skeletons than most.

She was not about ready to say that she did too. But…

Mitotsudaira stirred. She was waking up.

Mitotsudaira had not slept long, but she felt extremely rested.

The first thing she did after waking was take a look around.

She was in their classroom.

Everyone was there. Her king, Horizon, Asama, and the others were looking at her.

“Judge. I feel like I finally managed to shake off the excitement from everything that happened last night…and continued on until the morning.”

She still remembered that woman bowing from the distance as she left.

Her king had told the woman “congratulations”.

She had to wonder what that woman would think of her now. Was she handling herself better than back then? Or was she simply being sentimental? But…

When she looked around, she saw everyone there.

They had been there back then, but she had not realized back then just how important this place and this atmosphere were.

That may have been why she felt this way when thinking back on that time.

“I went through so many changes back then and it led me toward even more change.”

“Ho ho? So being massaged created a change in you, did it?” asked Horizon. 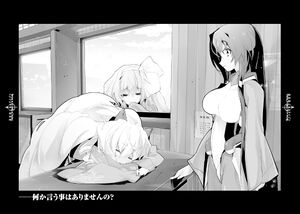 “Judge. You could say that.” She lightly held her own body and let the smile appear on her face. “I am being ‘massaged’ by my surroundings every single day…and that has helped me grow.”

A sign frame arrived from her mother, but she shattered it with a karate chop.

–Do you have anything to say?