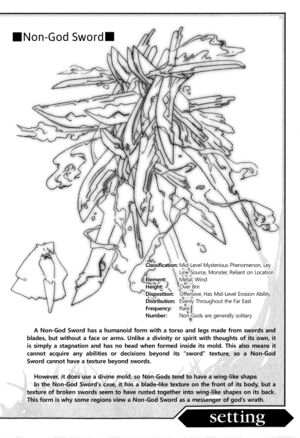 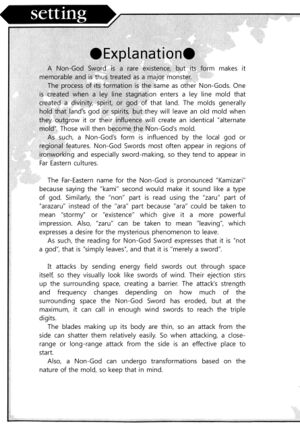 Distribution: Evenly Throughout the Far East

A Non-God Sword has a humanoid form with a torso and legs made from swords and blades, but without a face or arms. Unlike a divinity or spirit with thoughts of its own, it is simply a stagnation and has no head when formed inside its mold. This also means it cannot acquire any abilities or decisions beyond its “sword” texture, so a Non-God Sword cannot have a texture beyond swords.

However, it does use a divine mold, so Non-Gods tend to have a wing-like shape.

In the Non-God Sword’s case, it has a blade-like texture on the front of its body, but a texture of broken swords seem to have rusted together into wing-like shapes on its back. This form is why some regions view a Non-God Sword as a messenger of god’s wrath.

A Non-God Sword is a rare existence, but its form makes it memorable and is thus treated as a major monster.

The process of its formation is the same as other Non-Gods. One is created when a ley line stagnation enters a ley line mold that created a divinity, spirit, or god of that land. The molds generally hold that land’s god or spirits, but they will leave an old mold when they outgrow it or their influence will create an identical “alternate mold”. Those will then become the Non-God’s mold.

As such, a Non-God’s form is influenced by the local god or regional features. Non-God Swords most often appear in regions of ironworking and especially sword-making, so they tend to appear in Far Eastern cultures.

The Far-Eastern name for the Non-God is pronounced “Kamizari” because saying the “kami” second would make it sound like a type of god. Similarly, the “non” part is read using the “zaru” part of “arazaru” instead of the “ara” part because “ara” could be taken to mean “stormy” or “existence” which give it a more powerful impression. Also, “zaru” can be taken to mean “leaving”, which expresses a desire for the mysterious phenomenon to leave.

As such, the reading for Non-God Sword expresses that it is “not a god”, that is “simply leaves”, and that it is “merely a sword”.

It attacks by sending energy field swords out through space itself, so they visually look like swords of wind. Their ejection stirs up the surrounding space, creating a barrier. The attack’s strength and frequency changes depending on how much of the surrounding space the Non-God Sword has eroded, but at the maximum, it can call in enough wind swords to reach the triple digits.

Also, a Non-God can undergo transformations based on the nature of the mold, so keep that in mind.