Chapter 15: Intruder on the Hunting Ground[edit] 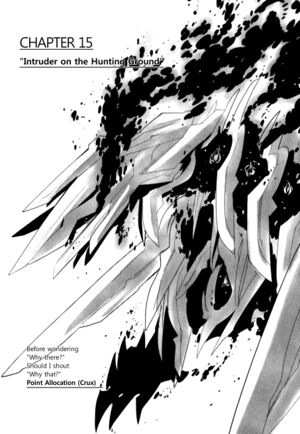 At first, Asama did not understand what had happened.

The sign frame next to her face displayed everyone’s status and they were all unharmed.

But she also found she was collapsed on her side as something sent a heavy tremor through the floor.

She came to her senses. She sat up and quickly got to her feet. Before even checking on her surroundings, she ran to the empty outer edge of the ship. Her body felt slightly heavy, but that was likely only the tremor in her muscles after falling over. She still had three defense barriers left. So…

They were all getting up, but Kimi alone was already standing with her arms lightly crossed.

She had her back to the others and she was unharmed.

“Asama,” she said quietly. “Check your number of Blessings after this. Those dragons seem to be targeting you.”

Asama went ahead and agreed and she gained an understanding of the current situation. The first Hidden Dragon that they could call the parent was behind them and the two child ones were in front of them. They were trapped between the dragons, but…

A wind suddenly blew in from behind them.

The parent Hidden Dragon had leaped up into the sky. That whipped up a massive amount of wind and shook the ship.

“Former boy, one of them has fled.”

“Testament. Can we accuse Musashi of letting it escape?”

“Unfortunately, it originated from Aki.”

“What a pain… Don’t just let it escape. Keep fighting until it’s dead.”

Asama realized the flying Hidden Dragon’s escape route was taking it toward the Kojima Peninsula.

…We were right about it being the Non-God Sword created from the Aki stagnation.

That was why the Hidden Dragon was heading toward the origin of that ley line stagnation. That way it could recover. It might return soon, but for the moment…

“I have determined we must only endure those two for another two minutes and seventeen seconds. Over.”

“Heh heh. Things are looking much more hopeful now. But…”

Kimi spoke to the others as they got up.

Those words were accompanied by a second pair of high-speed charges.

…I need to stay focused!

Those Hidden Dragons were undoubtedly learning. And they were learning from the previous Hidden Dragon that could be seen as their parent.

Sensing danger, Mitotsudaira confirmed that the Cerberus was still clinging to her head

Her mind was clear, but her body was still suffering from the previous impact.

She had far fewer defense barriers than before. Asama was casting more, but she was too slow.

However, Mitotsudaira was not going to criticize Asama. That was why she did not call out to the girl. They could not receive any support from Musashi at the moment, so Asama did not have the ether usage rights of the Asama Shrine. That meant she had to secure her ether through other routes and methods. It was almost a miracle that she was creating enough defense barriers for everyone in the first place. Which meant…

The second attack was coming. And…

The paths of two charging Hidden Dragons were intersecting. At this rate, their giant bodies would collide, but…

The two of them fused together and then split apart. Almost like water combining and then splitting back out into distinct streams, their paths intersected on the left and right and then split off on the opposite sides.

With simultaneous roars, they changed course as they flew in.

This was unexpected. The defense barriers Asama had cast on the dragons were entirely useless. Mitotsudaira had only one option.

She worked even harder to dodge, and…

She felt she could not avoid the giant approaching form.

And in that instant, the Cerberus barked on her head.

The trio of small voices was not expressing fear. Instead, it seemed to be scolding her. It seemed to be telling its hesitant master to get moving. So…

No matter what happened she could not let herself lose on the psychological level.

She had not yet received her king properly and her king was not in danger here.

She did not need to protect anyone. So…

“This is the time for battle!”

As soon as she said that, a power arrived as if in response.

As one Hidden Dragon flew toward her on the port side, something collided into it as a counterattack.

At first, she thought it was a god of war, but…

The size and shape were wrong.

A giant form passed by over her head and collided with the approaching Hidden Dragon. It was…

It was the Non-Dragon Sword.

Asama saw an incomprehensible attack that was far too gigantic to simply call it assistance.

It too had presumably been born of a stagnation.

…What is going on?

As Asama completed various preparations and cast more spells, the dragons clashed before her eyes.