Final Chapter: Those who Look Up at the Normal World[edit] 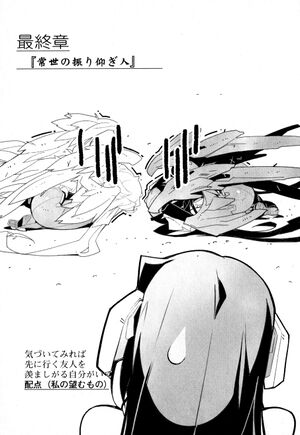 All of a sudden

I found I was jealous

Of the friends who had gone on ahead

Point Allocation (What I Want)

“Ha ha,” laughed a man high in the night.

He was above a derrick mast on Takao.

The man, Almirante, sat in the seat of a small flying boat and he was laughing with a sign frame next to him.

“So after having you clean up the grounds, she healed you and let you leave? Sounds like a fun tour of the Asama Shrine, Marine.”

“This wasn’t some sports match… Oh, I broke my right collarbone. Will I get injury pay for that?”

“The ranks are related to the jobs we’re allotted, so you’ve got a decent argument. I’ll arrange it with the guild.”

Almirante viewed the nightscape of Musashi as the night wind washed over him. And he leaned back in his seat.

“If anything happened, I was thinking of picking you up like old times.”

“So Zwei Fräulein is Rank 2. And that might change again pretty soon.”

“…Are you saying they will defeat Wild Kamelie?”

“You intended to defeat her too, didn’t you?”

After a while, she replied with a “judge”. And…

“Almirante, why didn’t you ever demand a rematch with them?”

“When you get older, you find you’re capable of doing a lot of things separate from experience.”

“You can say you’re the strongest and not really care even if you lose.”

He laughed after that.

There was clear annoyance in Marine’s voice, but he only quieted his laughter a bit.

“Ha ha. It’s all about experience. But, Marine, you can’t trust yourself in anything that doesn’t come from experience. …Neither can Zwei Fräulein.”

“Can you gain confidence from something other than experience?”

“Confidence means trusting in yourself. And if you can’t do that, then you rely on experience.”

“Skill is necessary. But in the end, trusting in yourself means to ignore that and take the plunge at some point. Oh, and this is a lecture.”

“Do you think Zwei Fräulein has that?”

“That’s what Technohexen are,” said Almirante while erasing the smile from his face. “They were driven from their homes, had their families hunted, lost all their rights, and even had the law turn on them. The Technohexen hunts born from the inquisition reach their peak in the 15th century. Do you know what that means?”

“…For Technohexen, their defeat is predetermined?”

“They started here after losing everything. So if there are some idiots that decide to aim higher from that situation, then I’m sure they’ll just keep gaining more experience and confidence.”

“The same can be said of their predecessor, Wild Kamelie.”

“With Tres España, the development race, and me, you had your share of issues. Other things kept forcing more and more defeat onto you.”

Almirante moved the flying boat as he spoke. He had it float up and enter a descending route.

And he said more to Marine.

“But you’ve finally earned a defeat all your own.”

“…Marine, go get something to eat. Orange’s place should be open. I know you haven’t had our home cuisine in a while, but at this point, we should call it foreign cuisine. Look at it like that as you start eating it again. After all…from now on, you’re starting with what you’ve lost.”

“I’ll be by to pick you up, so open a window. Hop onto the luggage space like you failed to do out the ship’s window way back when. Nowadays, I’m sure you can pull it off.”

Naito sat on the stairs in front of the main shrine and looked at her left hand.

It was wrapped with a bandage woven with Shinto spell charms, so it looked like her hand had grown a few sizes.

That response came from Naruze who was next to the stairs pulling guitar cases from the pile of instruments, opening them, and checking on the contents.

“I broke my collarbone and dislocated the shoulder, so I won’t be able to hold an instrument for a while. I probably won’t be able to practice until after the Spring School Festival begins.”

“We’ll have to practice the singing and stage movements until then.”

“Asama said she would be purifying us and doing an official healing, but how fancy is that gonna be?”

She thought it was weird for Technohexen to rely on Shinto, but…

“An official healing by the Asama Shrine will be stronger than anything we could do. I want to be healed in time for the Gagaku Festival, so we should probably do as Asama-chi says.”

Naito thought as she said that.

…It might be good to have this chance to let ourselves cool down.

A lot had happened recently and she had both hesitated and overheated.

But until they could actually practice…

“Maybe we should calm down some.”

“I doubt we’ll have the chance. Not with Wild Kamelie out there. …She’s sure to want a match during the Spring School Festival.”

“The tester application date happens to fall on the first day.”

“Wow.” Naito spread her mouth horizontally. “If we get injured there, we’ll be in real trouble for the Gagaku Festival.”

It was scary how Naruze could smile like that.

“Are you assuming we’re going to get injured in that match?”

“No. But it might happen if we’re unlucky. And I’m not giving up on the Gagaku Festival. I intend to perform and outdo everyone else there.”

Naito glanced over at Naruze’s smile.

Why was it? She realized something when looking at Naruze. Not only was the girl excited, but…

“Ga-chan, have you gained more confidence?”

“Who knows. I do know I would’ve gotten pretty down if we’d lost,” she said. “But I am happy to know we can reach for greater heights.”

“We can. If we’re together we can. I think I can believe that now.”

She seemed to be asking “how about you?”, so Naito smiled a little.

She held her right hand forward and descended the steps.

They faced each other and lightly swung their right hands toward each other.

“After all, we are Zwei Fräulein.”

They did not need any titles such as “dragon slayer”.

They were Zwei Fräulein.

Naito and Naruze bumped their right fists together.

The solid sound rang through the shrine grounds.

Asama went out to call for Naito and Naruze.

They had prepared a quick celebration party in Asama’s room of the Asama Shrine’s main building.

The cooking was complete, so she had planned on calling them in, and purifying them in the spring since they had to change clothes anyway, but…

“Naito? Naruze? You’ve checked out the instruments now, right? So if you’re going to be purified…”

She saw the two of them curled up and facing each other.

After asking, she realized they were both holding their left shoulder or left arm.

“Ga-chan, th-that touch vibrated pretty painfully through us, didn’t it?”

“Y-yes. It really got my shoulder. It’s still too soon to get carried away.”

Asama did not really understand, but they had apparently screwed up somehow.

But then they got up and looked to her.

“Hey, Asama. Once we take a break and get something to eat and drink…do you want to hear our new song for the Gagaku Festival?”

Asama thought while nodding at Naruze’s question and expression.

Asama had her own things to think about and had spent her days doing that, but those two were likely the same.

Kimi and Mitotsudaira walked up behind her.

Kimi was wearing an apron after helping out and she smiled a little when she saw that pair.

“Oh, they seem to be doing well. But, you two? Based on what I saw today, are you still missing a new song for the Gagaku Festival?”

“Since we’re injured and can’t practice, this might be our chance to write it,” said Naito as she looked up into the sky.

“How do you write songs?”

She was curious how other people did what they were about to do.

Naito smiled as she responded to the question.

“We generally do it while chatting away. I hope we can continue to exchange information and methods like this.”

That girl could be more conservative, so that meant she was allowing them to intervene in her sensibilities. Asama found that somewhat surprising, but…

…No, this is probably just one of the “usual” things that Naruze has.

Before, those two had referred to her as one of their own.

That must not have been a temporary thing.

Naruze once more used that phrase.

“We consider each other one of our own, so I’d like to discuss what we’re doing for the Gagaku Festival, how we show off our songs, and plenty of other things too. But,” she said, “those discussions are probably going to be more positive now, so…I’m glad we won. Now we can look a little higher from now on.”

Asama thought about the phrase “look a little higher”.

…Is she saying she wants to keep doing that forever?

With that question in her heart, Asama asked the two of them a question. If they were going to keep looking higher…

“We have wings and we can fly, so moving higher is really important.”

That meant they had made up their minds.

With this battle, they had taken at least one step forward in their idea of the “usual”.

Asama looked to the two Technohexen.

Naito spread her wings to see how her body was doing, but her six wings were not harmed. To prove it, she gave a light flap.

“We’ll probably have a fight with a pretty major opponent after a short break, but you don’t have to worry about us. Even if we’re beaten up and looking down, we’ll be flying again before you know it.”

“Hee hee. You say that, Margot, but I tend to get down and stay down when I lose, so you’ll have to pull me back up if that happens. But…what about you, Asama? Can you look higher?”

Asama thought about it. As far as Musashi’s Shinto was concerned, the only person higher than her was her father.

Naito and Naruze moved out ahead of me, she realized before answering.

Everyone but Kimi opened their mouth at that.

“Heh heh. You’ve been viewing each other through a certain framework without realizing it.” Kimi removed her apron with a smile. “And festivals are best for breaking free of that kind of framework. You expect to see surprising sides of people there.”

“Then if I work at it and surprise some people, I win, right?”

Asama immediately thought of him.

He had guided her to start this band, so would he be surprised to see her on the stage? Or would that be exactly what he expected?

He was an entertainer. It would take a lot to surprise him.

But, she thought. Naito and Naruze overcame one of their hurdles today.

“Then,” said Asama without forgetting that enjoying this herself was the most important part. “I hope I can surprise everyone by surpassing their expectations.”

She hoped they could have fun and celebrate at the Gagaku Festival. They were about to undergo purification and hold a quick party, but that would be enough of a divergence from their “usual” life.

“What do you want to do?” Asama opened a sign frame and asked Naito and Naruze this question. “Do you want me to inform the rest of the girls in the class what happened?” 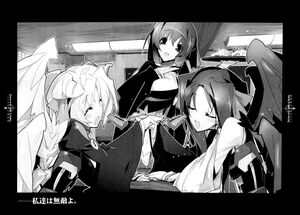 “They’ll find out soon enough even if you don’t, so you might as well.”

Naruze averted her gaze, but she did not forbid it. Asama found that kind of amusing as she wrote up the divine mail.

And she asked another question that occurred to her.

“Should I inform Toori-kun as well?”

“He might bring a celebratory tart to school tomorrow.”