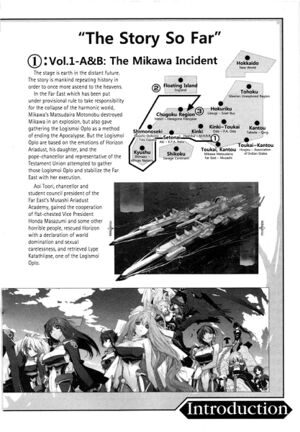 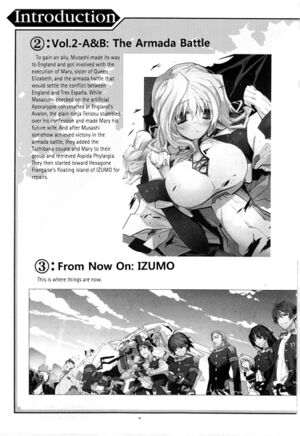 The stage is earth in the distant future. The story is mankind repeating history in order to once more ascend to the heavens.

In the Far East which has been put under provisional rule to take responsibility for the collapse of the harmonic world, Mikawa’s Matsudaira Motonobu destroyed Mikawa in an explosion, but also gave gathering the Logismoi Oplo as a method of ending the Apocalypse. But the Logismoi Oplo are based on the emotions of Horizon Ariadust, his daughter, and the pope-chancellor and representative of the Testament Union attempted to gather those Logismoi Oplo and stabilize the Far East with her execution.

Aoi Toori, chancellor and student council president of the Far East’s Musashi Ariadust Academy, gained the cooperation of flat-chested Vice President Honda Masazumi and some other horrible people, rescued Horizon with a declaration of world domination and sexual carelessness, and retrieved Lype Katathlipse, one of the Logismoi Oplo.

To gain an ally, Musashi made its way to England and got involved with the execution of Mary, sister of Queen Elizabeth, and the armada battle that would settle the conflict between England and Tres España. While Masazumi checked on the artificial Apocalypse constructed in England’s Avalon, the plain ninja Tenzou stumbled over his confession and made Mary his future wife. And after Musashi somehow achieved victory in the armada battle, they added the Tachibana couple and Mary to their group and retrieved Aspida Phylargia. They then started toward Hexagone Française’s floating island of IZUMO for repairs.

This is where things are now.

Four on the far right side from top to bottom:

Next three top to bottom (Bottommost is just below the 1)

Next four top to bottom: