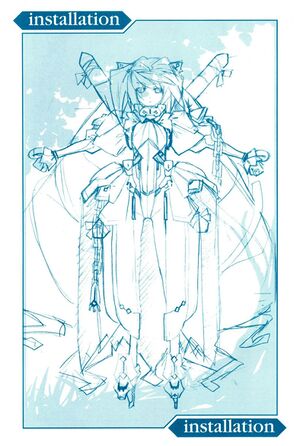 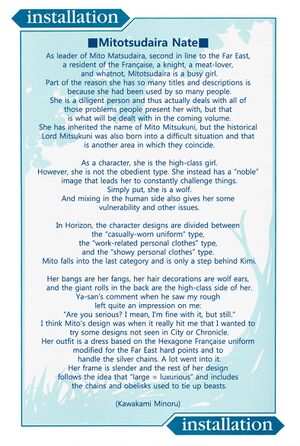 As leader of Mito Matsudaira, second in line to the Far East, a resident of Française, a knight, a meat-lover, and whatnot, Mitotsudaira is a busy girl.

Part of the reason she has so many titles and descriptions is because she had been used by so many people.

She is a diligent person and thus actually deals with all of those problems people present her with, but that is what will be dealt with in the coming volume.

She has inherited the name of Mito Mitsukuni, but the historical Lord Mitsukuni was also born into a difficult situation and that is another area in which they coincide.

As a character, she is the high-class girl.

However, she is not the obedient type. She instead has a “noble” image that leads her to constantly challenge things.

Simply put, she is a wolf.

And mixing in the human side also gives her some vulnerability and other issues.

Her bangs are her fangs, her hair decorations are wolf ears, and the giant rolls in the back are the high-class side of her.

Ya-san’s comment when he saw my rough left quite an impression on me: “Are you serious? I mean, I’m fine with it, but still.”

I think Mito’s design was when it really hit me that I wanted to try some designs not seen in City or Chronicle.

Her outfit is a dress based on the Hexagone Française uniform modified for the Far East hard points and to handle the silver chains. A lot went into it.

Her frame is slender and the rest of her design follows the idea that “large = luxurious” and includes the chains and obelisks used to tie up beasts. 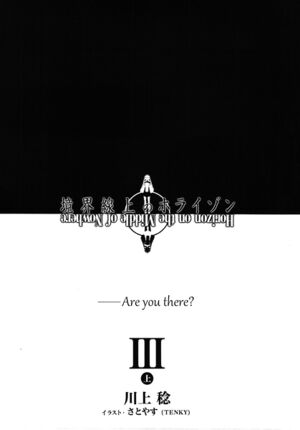 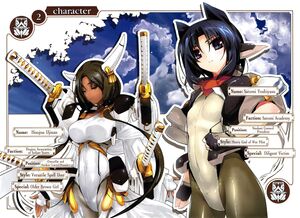 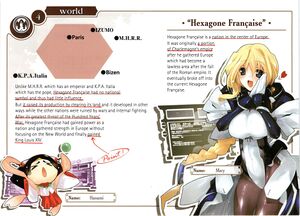 Hexagone Française is a nation in the center of Europe.

It was originally a portion of Charlemagne’s empire after he gathered Europe which had become a lawless area after the fall of the Roman empire. It eventually broke off into the current Hexagone Française.

Unlike M.H.R.R. which has an emperor and K.P.A. Italia which has the pope, Hexagone Française had no national symbol and thus had little influence.

But it raised its production by clearing its land and it developed in other ways while the other nations were ruined by wars and internal fighting.

After its greatest threat of the Hundred Years’ War, Hexagone Française had gained power as a nation and gathered strength in Europe without focusing on the New World and finally gained King Louis XIV.←Important Point! 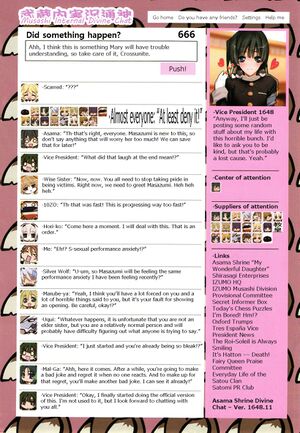 Top right: Go home | Do you have any friends? | Settings | Help me

Inside box: Ahh, I think this is something Mary will have trouble understanding, so take care of it, Crossunite.

Almost everyone: “At least deny it!”

Asama: “Th-that’s right, everyone. Masazumi is new to this, so don’t say anything that will worry her too much! We can save that for later!”

Vice President: “What did that laugh at the end mean!?”

10ZO: “Th-that was fast! This is progressing way too fast!”

Hori-ko: “Come here a moment. I will deal with this. That is an order.”

Silver Wolf: “U-um, so Masazumi will be feeling the same performance anxiety I have been feeling recently?”

Marube-ya: “Yeah, I think you’ll have a lot forced on you and a lot of horrible things said to you, but it’s your fault for showing an opening. Be careful, okay!?”

Uqui: “Whatever happens, it is unfortunate that you are not an elder sister, but you are a relatively normal person and will probably have difficulty figuring out what anyone is trying to say.”

Vice President: “I just started and you’re already being so bleak!?

Mal-Ga: “Ahh, here it comes. After a while, you’re going to make a bad joke and regret it when no one reacts. And to make up for that regret, you’ll make another bad joke. I can see it already!”

Vice President: “Okay, I finally started doing the official version of this. I’m not used to it, but I look forward to chatting with you all.”

“Anyway, I’ll just be posting some random stuff about my life with this horrible bunch. I’d like to ask you to be kind, but that’s probably a lost cause. Yeah.”

The Roi-Soleil is Always Smiling

Everyday Life of the Satou Clan