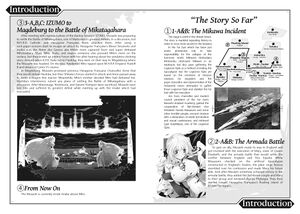 The stage is earth in the distant future. The story is mankind repeating history in order to once more ascend to the heavens.

In the Far East which has been put under provisional rule to take responsibility for the collapse of the harmonic world, Mikawa’s Matsudaira Motonobu destroyed Mikawa in an explosion, but also gave gathering the Logismoi Óplo as a method of ending the Apocalypse. But the Logismoi Óplo are based on the emotions of Horizon Ariadust, his daughter, and the pope-chancellor and representative of the Testament Union attempted to gather those Logismoi Óplo and stabilize the Far East with her execution.

Aoi Toori, chancellor and student council president of the Far East’s Musashi Ariadust Academy, gained the cooperation of flat-chested Vice President Honda Masazumi and some other horrible people, rescued Horizon with a declaration of world domination and sexual carelessness, and retrieved Lype Katathlipse, one of the Logismoi Óplo.

To gain an ally, Musashi made its way to England and got involved with the execution of Mary, sister of Queen Elizabeth, and the armada battle that would settle the conflict between England and Tres España. While Masazumi checked on the artificial Apocalypse constructed in England’s Avalon, the plain ninja Tenzou stumbled over his confession and made Mary his future wife. And after Musashi somehow achieved victory in the armada battle, they added the Tachibana couple and Mary to their group and retrieved Aspida Phylargia. They then started toward Hexagone Française’s floating island of IZUMO for repairs.

3: Volume 3-A,B,C: IZUMO to Magdeburg to the Battle of Mikatagahara

After meeting with representatives of the Kantou forces in IZUMO, Musashi was preparing to settle the Battle of Mikatagahara, one of Matsudaira’s greatest defeats, in a discussion, but M.H.R.R. Catholic and Hexagone Française fleets attacked them. After using a rock-paper-scissors dash to escape an attack by Hexagone Française’s Mouri Terumoto and nudist sun, the Reine des Garous aka Mito’s mom captured Toori and super defeated Mitotsudaira. Mary, Mito, Naito, and maybe someone else pursued Mito’s mom on the surface, but they ended up joining forces with her after hearing about her predatory docking story. Around when K.P.A. Italia fell to Hashiba, they were on their way to Magdeburg where the Musashi was headed. On the way, Awakened Mito ripped open M.H.R.R Emperor Rudolf II and obtained Carlos V’s memo.

In Magdeburg, Musashi promised previous Hexagone Française Chancellor Anne that they would defeat Hashiba, but then Shibata’s forces started to attack and Anne passed away to avoid a dragon line reactor. Meanwhile, Mito’s mother decided Mito had defeated her. Hashiba’s interference ruined any plans of settling the Battle of Mikatagahara with a discussion. After Matsunaga, Yoshitsune, and Satomi Yoshiyori were sacrificed, Musashi even lost Edo and suffered its greatest defeat while meeting up with the Ariake which had evacuated.

The Musashi is currently inside Ariake above Mito.