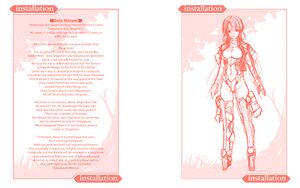 Historically, the name’s reading was not Narumi or even Narizane. It was Shigezane.

His name probably ranks pretty high when it comes to difficulty to read.

Shigezane was historically one year younger than Masamune.

The accepted theory is that they were raised like stepbrothers since Shigezane was Masamune’s attendant, but it is not actually known for sure.

Because he was a skilled warrior, he had the famous centipede design on the front of his helmet.

Some say it was a caterpillar instead of a centipede, but either one referred to the fact that he never retreated. And to prove it, he served as the rear guard of the Date army, saved them from some tight spots, and did lots of other things too.

Once he was able to serve Masamune, he left for the Bunroku Campaign.

But there is one mystery about Shigezane’s life.

At around 1593, he abandoned the Date clan, even abandoned his castle, and disappeared. (There are a number of theories.)

He refused the other clans that tried to recruit him, but he returned in time for Sekigahara.

What happened there is a real mystery when it comes to Shigezane.

In Horizon, Narumi is a third year that uses the Unturning Centipede.

Both her arms and both her legs are prosthetics.

This is partially to allow her to fight using the Unturning Centipede, but the details will be revealed in a later book.

I interpreted her flight as a sort of admonition and drew her as something of a hard to please warrior that ultimately cares for her comrades. 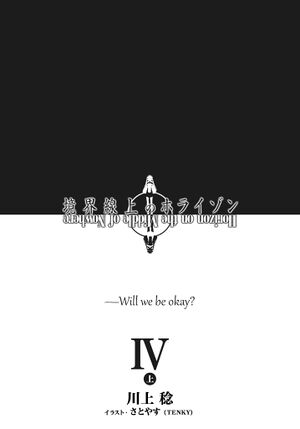 —Will we be okay? 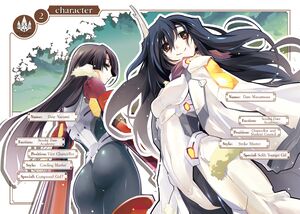 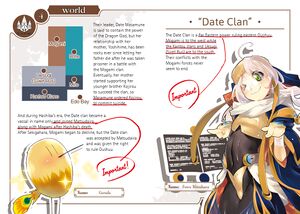 Mogami is to the west while the Kantou clans and Uesugi (Sviet Rus) are to the south.

Their conflicts with the Mogami forces never seem to end.

Their leader, Date Masamune is said to contain the power of the Dragon God, but her relationship with her mother, Yoshihime, has been rocky ever since letting her father die after he was taken prisoner in a battle with the Mogami clan.

Eventually, her mother started supporting her younger brother Kojirou to succeed the clan, so Masamune ordered Kojirou to commit suicide.

And during Hashiba’s era, the Date clan became a vassal in name only and joined Matsudaira along with Mogami after Hashiba’s death.←Important!

After Sekigahara, Mogami began to decline, but the Date clan was accepted by Matsudaira and was given the right to rule Oushuu. 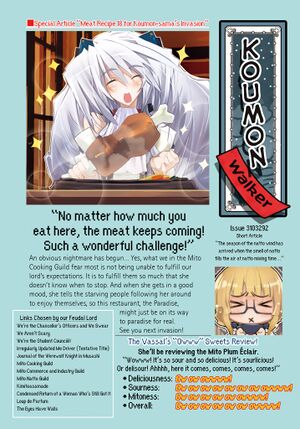 “No matter how much you eat here, the meat keeps coming! Such a wonderful challenge!”

An obvious nightmare has begun… Yes, what we in the Mito Cooking Guild fear most is not being unable to fulfill our lord’s expectations. It is to fulfill them so much that she doesn’t know when to stop. And when she gets in a good mood, she tells the starving people following her around to enjoy themselves, so this restaurant, the Paradise, might just be on its way to paradise for real. See you next invasion!

Links Chosen by our Feudal Lord

Journal of the Werewolf Knight in Musashi

Condensed Return of a Woman Who’s Still Got It

The Eyes Have Walls