Chapter 22: Reflector in the Heavens[edit] 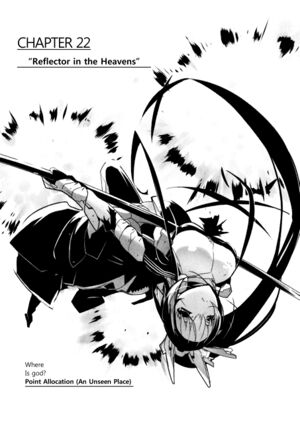 Futayo turned back toward Kakei. She primarily attacked with the bottom of her spear while she made sure to…

The gunfire arrived immediately afterwards. She had attacked from the right, but it came from the left. And the 10 shots appeared less than a centimeter away from the side of her face or her stomach.

The attack came from her blind spot.

But she had speed. She was swinging from right to left, but the axis of her feet had pulled off the previous footwork and bullet kicks.

So she leaped to the side and used her spear to…

An impact shook Tonbo Spare’s shaft. She used that to adjust the speed and direction of her leap so she could dodge the remaining bullets.

When she knew where the attack was coming, this kata allowed her to accurately block it and use it for her next action.

And there was only one thing she could say about Kakei’s attack for making her think that way.

She had never thought she would experience gunfire like swordsmanship.

And since he fired 10 shots at once…

“You truly rival a master swordsman!”

Oh, right. My mistake. I shouldn’t look at everything from my own perspective.

There was something she understood now.

She approached and was knocked back each time, but she was still gradually getting closer as she spoke. Even now, she was dodging the gunfire that appeared outside her field of vision.

“Your gunfire follows a certain rule, doesn’t it?”

Since he asked, Futayo answered.

“All of your shots come from your own blind spots!”

Kakei smiled bitterly in his heart as he continued firing at Musashi’s Vice Chancellor.

She’s gotta have figured out how my shooting spell works by now.

Her evasions had grown quite sharp. She had focused on the attacks in her own blind spots and fully avoided them.

“And you are doing an excellent job with your blind spot attacks!”

That was true enough. After all…

…My Blind Spot Delivery sends “something unseen” to “an unseen place”.

It was an object transmission spell.

He wished he could send things to “a seen place”, but he could not thanks to his affinity with the spell.

This had caused him a lot of trouble in the past.

He had initially trained in the ninja techniques of throwing needles or small projectiles.

Back when he was only throwing things via pure martial arts, his results had been second to none.

…They honestly had high hopes for me.

But in a real battle against someone who could use spells, martial arts alone were not enough.

So his training had begun to include throwing spells for use in combat.

And he found he was unable to use those spells properly.

Everyone else had been able to launch their projectile several hundred meters while he could only reach a few dozen meters at best. When he looked into it, he found that his launch spell was activating but not lending him its power for some reason.

It was a matter of affinity.

Affinity did not always work in the positive direction.

Spells were a means of gaining your god’s approval and borrowing their power. Someone in the equation was not cooperating, but he had not known if it was him or the god.

The spell had not activated properly for him.

People had said all sorts of things about him. Some claimed his god had abandoned him. Others claimed he was unclean. And his excellent results with martial arts had only made the criticism stronger.

Some of his friends had helped him try to overcome the poor affinity, but even they had eventually realized it was no use and left him.

At the time, he had thought it was all over for him, he had stopped attending training, and he had eventually started planning to live the life of a village laborer instead of a ninja.

He had decided to throw it all away.

One day after classes let out at the academy’s middle school, he had decided to throw out everything he had done so he could live an easier life.

He had used his poor launching spell to throw his beloved throwing needle to the floor behind him.

And when he exited into the hallway, he had noticed something.

The throwing needle had stabbed into the hallway’s wooden floor.

It had made no sense to him. At first, he had thought a tsukumogami residing in the needle had been expressing its reluctance to be thrown out, so he had taken it to the metalworking room and alchemy room to have it analyzed.

But they found nothing out of the ordinary.

He had felt his only option was to recreate the situation, but whenever he threw it while watching, nothing happened.

He had only figured out what was happening after dropping out of the training classes. Before summer break when everyone else was focused on the upcoming high school entrance exam, he had thrown a paper airplane in the classroom to ask a friend about their summer break plans.

To make sure the teacher did not notice, he had nonchalantly tossed the paper airplane to the side, but it had fallen back on top of his desk.

He had not known why, but he had known it was the same as with the needle.

He had wondered if his friend had returned it with some kind of spell, so he had tried it again.

Sometimes a god took a liking to someone. Sometimes the opposite happened.

He did not know which one he was, but he remembered what his middle school homeroom teacher had said:

“I think your god must want to take possession of your accurate line of fire and the tightening of your fingers as you take aim. They must want to adore them as their own.”

“They’d take those things from me?”

“Yes. …Looking at it that way, you must have sharpshooting skills so great that your god is willing to rob you of your human rights for them. So look at it that way.”

“Your god will always watch over the shots that not even you can see.”

He did not remember how he had responded.

But he had never returned to the firing lessons.

Because he had a goal.

…Once I get to high school, I’ll get into the Chancellor’s Officers. At the very least, I need to be a Special Duty Officer.

And the results could be seen now.

Kakei looked to the enemy as he spoke and blew fuse smoke from the corner of his mouth.

“Are you still watching my shooting?”

With that, the enemy arrived. She spun her body with all her might, and…

Musashi’s Vice Chancellor arrived right in front of him with smoke trailing behind her.

She had caught him.

He took a back step.

But the movement began slowly. So…

…I can hit him first!

She charged in. She threw her body forward with all her strength to give herself too much momentum for any shots from behind to catch up.

But her shout was cut off.

Kakei seemed to collapse. And onto his back so that he stared up into the sky instead of at her.

He fell backwards, but…

Then Futayo realized what this meant.

By looking up into the sky and collapsing, Kakei gained something.

“The greatest blind spot and evasion!?”

If he looked into the sky, the ground and everything to the horizon entered his blind spot.

So that was what he had done.

She knew he would fire soon thereafter. Would it be to her left, right, or back?

It was the front.

It was a pure counterattack. He had not used this line of fire before now.

Soaring Wings contained great speed. Even if she leaped forward now, she would not gain much height while using Soaring Wings. And…

From the left, right, and back, groups of bullets were fired at different heights. They joined the barrage in front of her to surround her.

They were going to hit her.

Bullets were approaching from all directions. So…

Futayo took a certain action in response to the approaching bullets.

She made an intentional misstep.

“Heh heh. Now that was reckless.”

Kimi crossed her arms and spoke as the light at Futayo’s knees broke.

Soaring Wings had shattered. No…

…She shattered it herself, didn’t she?

Where had she learned that? No, she had probably just now thought it up. And in so doing…

“She will fly. …It’s terribly simple, but it’s an idea that would never occur to me since I try to preserve the dance. I could learn something from this.”

The solid sound only now reached Kimi, but Futayo was already airborne. She had flown far above Kakei’s head.

She was in the sky.

He saw an arc flying high in the night sky.

It was the Musashi Vice Chancellor’s hair.

…She really did it.

The enemy had sent her acceleration spell out of control. Normally, she used that uncontrollable blast of acceleration to dodge when she could not otherwise avoid his attack.

…Did she get that explosion of acceleration to follow her own axis!?

It had to have been a split-second decision. Just how good was her combat sense?

But in the sky overhead, the Musashi Vice Chancellor completed a flip and began to fall.

The arc of her hair was tugged straight as she dropped down.

He would be in trouble if he stayed collapsed on the floor here. But…

Kakei looked at the enemy and fired.

Not all blind spots were created by his field of vision.

“Your body creates a decent ‘home’ for my god.”

He could not see behind her.

So he took aim and offered the shots to his god.

But he soon realized something.

His bullets had not appeared behind the Musashi Vice Chancellor as she fell.

Kakei had never imagined this could happen, but he did not panic and simply pulled the trigger in his pants pocket.

But there was no sound or motion in the supposedly unseen area behind the Musashi Vice Chancellor’s back.

What is going on? he wondered. Did my “affinity” betray me now of all times?

But when he looked to the Musashi Vice Chancellor’s back as she fell, he saw something there: her spear.

So that was it.

“Did you reflect your back with the spear tip so I could see it!?”

She had erased his blind spot.

He shouted in his heart.

“This would be so much easier if you had betrayed me…!”

Kakei kept his eyes on the opponent falling from the sky and he aimed a shot from his blind spot. He aimed a bullet from his right side as he lay collapsed on the floor.

But just before he fired, she raised her voice.

The trick was simple. Just before Tonbo Spare’s cut had hit him, he had fired from his blind spot to hit himself from the right.

The impact rang loud, his body doubled over and flew to the side, and he was hit just a bit by the cutting power.

The Ariake’s surface armor shattered and Kakei was caught in the middle of it. After flying to the left, the cut from above smashed his right shoulder and slammed him into the surface armor.

But by the time Futayo landed…

“Thanks. …For using a projectile in the end.”

And it was not Kakei alone.

There were 3: Kakei, Unno, and Mochizuki who was broken and sitting on Unno’s shoulder.