Chapter 23: Performers on the Rotating Stage[edit] 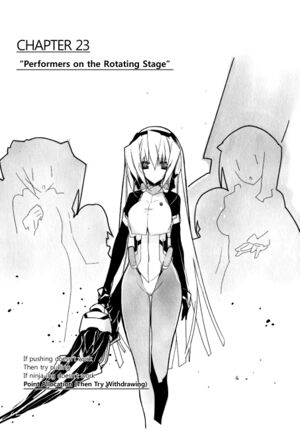 “Well, this is hopeless.”

He stood on the west end of the Ariake and his left shoulder was bent at an odd angle.

His right forearm was also limp.

But two other figures seemed to rise up behind him.

…That would be Mochizuki and Unno, wouldn’t it?

Mochizuki was almost entirely destroyed and sitting on Unno’s shoulder. Unno had lost most of her equipment and blood dripped from her right hand.

“We gave it our all, but that wasn’t enough. …Isa chose to fight to the death at this point. But there’s another option. Isn’t there, Musashi? If you give it your all and that isn’t enough…”

“We’ll make a comeback with a new meaning of ‘our all’.”

“That comeback could always be a fight to the death, right?”

A sudden voice interrupted as someone stepped forward. It was the crossdresser.

“Don’t be so quick to think about dying. Are you small animals or something? Do I need to rub your nose in it?”

“I really don’t want to know what you mean by that. And as the losers of the history recreation, we’re in no position to accept a major nation no matter how the interpretations work out.”

That’s true, thought Mitotsudaira. Even Musashi had been helpless against Hashiba in the resolution of Mikatagahara. And they had needed to consider the situations of the three nations during the meeting with Oushuu.

They were in no position to do whatever they pleased.

…And it has to be even worse for a small nation like Sanada.

At that point, a certain thought occurred to Mitotsudaira. And Asama seemed to have realized the same thing. They exchanged a glance, and…

She started to speak, but…

“Kakei-sama was it?” Horizon tilted her head and then spoke to Kakei’s group. “In that case, you can come join us if you ever feel like it.”

To her right, Mitotsudaira looked like she had hurriedly shut her mouth. And Asama was fairly certain she knew what that expression meant.

…Mito was thinking the same thing, wasn’t she?

“Heh heh,” laughed the idiot sister as she moved between Asama and Mitotsudaira and placed her hands on their shoulders from behind.

The other two girls simultaneously brushed off Kimi’s hands and they exchanged a sidelong glance.

“You sure have let a certain someone influence you, Mito.”

“I could say the same about you, Tomo.”

For that matter, Horizon was the same. As for Kimi…

…Kimi doesn’t often let her thoughts reach the surface, but it happened to her long ago.

But, thought Asama as she took a breath.

Asama: “I never thought Horizon would have a Toori-kun kind of idea.”

Gold Mar: “So we don’t need the Chancellor anymore?”

Silver Wolf: “My king! My king! You’re only helping the case against you!”

Hori-ko: “Phew… So I’ve taken another step into the lead…”

Asama did not really understand, but she was glad she was not caught in the middle of it.

Anyway, she thought as she looked to their opponents.

The three of them still stood there within the remnants of the smoke.

Unno realized Mochizuki’s entire body had gone tense while sitting on her shoulder. That meant Mochizuki could not fully control her own body at the moment…

…And she can’t make a decision here.

Unno honestly thought the Musashi princess’s suggestion was a feasible one.

By joining the winning side, they would have stability, even if that side’s victory was only an apparent one crippled by interpretations.

In the current Warring States period, it was common for powerful people to change academies. And Musashi did in fact contain skilled people from other nations.

“Can we call that suggestion the pride of the victor?”

“Unfortunately, Kakei-sama’s argument was that the losers cannot have their way in life. So as the future winners, they have suggested the entirely possible solution of, ‘Why not join the winning side?’ ”

“Is that like a short person envying a tall person and having the tall person tell them, ‘Come join me and you’ll grow taller’?”

“They’re taking away our position as the losers. …Couldn’t we accuse them of refusing to treat us like losers and using their victor’s pride to force us to join them?”

“We cannot. Musashi’s princess said ‘if you ever feel like it’, so she only made a suggestion and is not attempting to take anything from us. And the ‘ever’ does not set a time limit on the offer either.”

“Testament. That means we can join them as the losers. It also means we can also wait until everything is over and we have lost everything, including our inherited names.”

That was well stated, thought Unno.

“So whether we’re losers or winners is determined by our own decision, is it?”

“So the Leviathan princess speaks of the Uroboros?”

Tomoe Gozen smiled a little while tying together a wooden frame to support a fruit tree on the dark slope of an orchard.

“They accept and cut apart the destiny of winning and losing. That is the method Musashi is recognizing and creating. They do not trample anyone underfoot, but they do not immerse themselves in pity either. They gain as much as possible through a flat relationship.”

Tomoe Gozen took a breath and rested her hands.

The corners of her mouth rose as she looked down at Magdeburg where reconstruction was well underway.

“Hey, Matsunaga, can you hear me from the afterlife? …Musashi really has overcome your death and gained the soul needed to face a destroyer.”

She grabbed one of the fruits growing on the tree.

The pear was not quite ripe yet and she bit into it with the side of her mouth.

“It’s still a bit sour. Unsurprising at this point. But…” She observed the bite mark. “First the sprout is planted, grown, supported, and protected from the wind and rain. Only after all that does it grow into a great tree. And then it can supply its blessings and shade to many more people than helped it grow.”

“Are you saying that is the path Musashi has chosen?”

“Oh. You were here, Guericke?” Tomoe Gozen sat down on the slope and took another bite of the fruit. “I still don’t know what will happen.”

“Long ago…Yoritomo, the others, and I aimed for that path, lost sight of it, and failed to reach it.”

“Do you expect them to reach it?”

“I am turning a blind eye to the fact that you are sending them the results of your defense barrier research without permission.”

It seemed to take Guericke a moment to realize what she meant.

“We’ll interact with them for the summer events. Send them then.”

“They will still be sour then.”

“That’s perfect for them.” She took a large bite. “Don’t grow too sweet, Musashi. …Be the victors who treat the losers as your equals. Don’t you forget that.”

Kakei heard the overhead shellfire continue as if to criticize them for speaking with the enemy.

The din of battle sounded from all around, but he felt he could speak at least for now.

“So will Musashi accept us?”

“Yeah,” said the crossdresser as he adjusted the crotch of his shrine maiden outfit. “That’s how Musashi’s always been. We’ll accept all the other nations’ awkward people.”

He fixed the crotch, slapped his butt, and shouted “right?” at the others.

…What an awful academy…

Kakei thought that from the bottom of his heart, but there was one thing he had to say.

“I have no intention of making friends with you. I have an obligation to our current home.”

He sensed Unno and Mochizuki nodding behind him. But Musashi’s princess had more to say.

“Please answer me this: is that something you are willing to accept death over?”

“…That is not an easy question.” Unno spoke from behind him. “I can’t exactly answer that until I’ve looked death in the eye, can I?”

Then you’ll never be able to answer it, thought Kakei, but he made sure to hold his tongue.

Novice: “Then she’ll never be able to answer it, will she? Logically speaking.”

Four Eyes: “Did you hear that? This literary boy thinks he knows something about logic.”

Gold Mar: “But it looked a bit like that Kakei guy wanted to say something just now.”

So she bowed to those three.

“Judge. True enough. …That was indeed a difficult question. Let us call it a tie.”

Unno felt obligated to nod back and Kakei shook his shoulders as he turned to the side.

Novice: “They’re planning to withdraw. Find a good opportunity and keep them from escaping.”

The battle was not over. And they would understand that. So…

The shellfire was shattering defense barriers in the sky.

Kakei spoke below the light of the falling ether shards.

“By my estimation, we will face each other again before long, Musashi. Possibly as soon as a few days from now.”

“You are suggesting a rematch?”

“Next time, I expect it’ll be a home game for us. I don’t know who you’ll end up facing, though.”

He spat the fuse out of his mouth. And…

A transparent and wavering power flew from Horizon to the Sanada trio.

And 3 silhouettes on the western side of the Ariake were hit and blown away. But…

“Those were replacement dolls, weren’t they!?”

Gin gasped and looked back.

“I-I am so very sorry, Master Muneshige! I failed to predict this one!”

Horizon stared down at Maska Orge and nodded.

“Heh heh. Since that Sanada group managed to keep up with Horizon, I say they would fit in pretty well here on Musashi. Don’t you think?”

Hori-ko: “Not to worry. I still have the True Muneshige Cannon. …Although it has yet to accomplish anything.”

Me: “Dammit… I wish I had a Logismoi Oplo so I could have a trademark gag like that.”

Wise Sister: “Oh? You do, foolish brother? Hey, Asama, is there any kind of gag like that for him? If not, give him a nice big one! Y’know, big like those boobs of yours! C’moooon!”

Asama: “Uh, it’s not like I can just think up a gag on demand. I tend to stumble across them…”

Silver Wolf: “Yeah, your trademark gag really only works with you…”

However, a wind blew in to intrude on their exchange.

That wind was a noise. It was a low straining sound in the sky.

Naomasa looked out from the Ariake and shouted to the others.

“The Shirasagi Castle’s 2nd unit has finished its preparations! It’s on its way here!”