Chapter 2: Fun in the Water[edit]

The blazing sun shined down upon us mercilessly.

At the end of August, I, Charlotte, and Laura were heading towards “Spa World”, the place Charlotte won tickets for the other day.

“It’s almost as if…the weather is too good today.”

“I know, but going to an onsen in the middle of summer could be oddly appealing.”

By the way, up until a couple days ago, Laura thought wabisabi was a type of wasabi.

As usual, it seems there’s an informant providing wrong information.

“It's getting on sight!”

After switching from train to bus, followed by an hour long ride, we came to Spa World ‘Enjoy Resort’ at the top of a small hill.

A twenty floor hotel stood towering over the surroundings, and as it was just recently completed the exterior was in beautiful condition.

“It's quite crowded despite it being summer.”

The tour bus that had been beside us sped off.

“Yeah, probably because they have pools here too.”

We headed to the front entrance and handed over our tickets.

The lobby looked like it was constructed to be large, but since it was summer vacation season, it was overflowing with people.

“Right then, how about we go get changed. Where do you want to meet up?”

“Hmmm... how about the ‘Meeting Palm Tree’ written on the map?”

“Gotcha. I'll be quicker so I'll be waiting there.”

“Weaklings worry over what others see. Look at me! I'm a person without reservation!”

I understand what she's trying to say... but that's not the problem here.

But you know, that Laura seems to have taken a liking to calling me her wife, so she probably won't stop...

I split off from Laura and Charlotte, and went into the men's locker room.

By the way, as this place was remodeled during a time when society favors women, the men's changing room was only around half the size of the woman's one.

I'm not really bothered by it or anything, but it’s so confined that it is somewhat troubling.

Since the academy’s on the coast, not having to go look for a new swimsuit is a welcome relief.

Going to the pool with the usual suspects so many times this summer will be an enjoyable memory.

Fortunately, in return for assisting with the IS equipment tests during the summer, I have a significant amount of disposable income. As such, my 'war funds' for today were plentiful.

I quickly changed into my swimsuit, and headed towards the spa area.

This place is a mix of an onsen and theme park facilities, each being split into their own large area: an onsen area, a food area, and a pool area.

I could see ‘Onsens of the World’ written on a large sign from far away, and I instantly started to get hyped up to go in.

“Wait... first I have to get to the meeting place.”

I headed towards the ‘Meeting Palm Tree' that was next to the food area.

It just so happened to be the time where a lot of people were meeting up, so nearly twenty people were gathered there.

(Guess I'll check out the map while I can.)

Looking over it again, there’s a stage in the food area that looks like it’s used for special events.

I should say that 'stage' was in the shape of a gigantic sail boat, it was a quite a sight.

“He looks better in person than he does on TV.”

The people who had taken notice of me suddenly started creating a fuss.

The other day, I was on the television program “Orimura Ichika, The One Man in the World who can use IS!”

Incidentally, the ratings were quite good.

I remember getting a pack of sweets from the producer of the program as thanks.

Then again, becoming famous isn’t all that it’s hyped up to be.

I get treated as a target of girl’s interest at school. It's troublesome getting this outside of school as well.

Laura and Charl could you get here a bit faster please?

As I was thinking that, I heard a different kind of commotion hit my ears.

“Whoaoaa!! What’s with that beauty!!”

I looked over, and as I thought, Charlotte and Laura were there.

“Sorry to keep you waiting.”

The two rushed over to me.

Looking closely, I see that the swimsuits they were wearing were different from the ones they wore at the seaside school.

They’re probably the same brand, as “CAT&TAIL” was written on them.

The stitched emblem is a cat with a tail wrapped around it.

� Charlotte was happy, and Laura was overflowing with confidence.

Laura seemed so embarrassed during the seaside school too, that’s some change of heart.

“Flowers in both hands!? I’m so jealous.”

“That figures, a good man has to have good women with him.”

As the centers of two different hot topics joined together, the noise around us grew louder.

“Waaa, amazing. There's even a slide in the wave pool.”

“It looks like there's a volley ball court over there, with real sand as well.”

“There's a diving board also, I'll show off my skill later.”

As a result of our [one-shot] high tension discussion in the pool area, we decided to go the slide.

Charlotte spoke up, suddenly remembering something.

“It looks like you go down the slide in pairs.”

“Hmph, fine then. Just to let you know, rock paper scissors is among my strengths.”

The winner Charlotte flashed a full faced smile, and the loser Laura had a look of regret.

“Hmmm, so how are we supposed to go down this in a pair?”

As we had question marks over our heads a staff lady called out to us.

“The pair water slide right? Like this… you hold the girl from behind.”

I sit down in the entrance to the slide first.

“The girl sits down between your legs.”

With a bit of reservation, Charlotte sits down in between my legs.

“That's it. Then the guy squeezes the girl from behind. Squeeeze. Arms around the stomach!”

For some reason, Charl gives me a forceful reply. Doing as the lady told me I hold onto her from behind.

Ugh, don't go quiet on me Charl. It's embarrassing for me too.

Whether I want it to or not, I can feel the special softness of a girl’s body from the skin to skin contact.

Plus from being so close that I can feel her body warmth, my heart starts to pound.

“Finally, the girl has to hold onto the guys arms. Hold on tight! It's dangerous if you become separated midway through.”

Charl gave another energetic reply, and squeezes onto my arms. 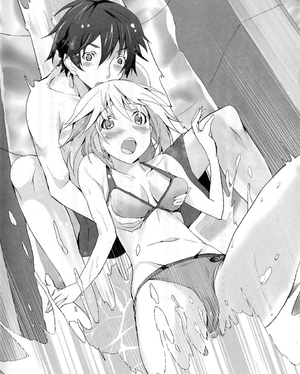 Feeling embarrassed that Charlotte might realize my heart was pounding, I hurry and check with the staff lady so we can take off.

The staff lady pushes on my back.

The beginning of the slide went by slowly, but we accelerated quickly into high speed.

I close my eyes as the water splashes into my face, which causes my arms to reactively tense up.

We were sliding considerably fast, and there was no time to exchange words.

Reacting similarly to the way I did, Charl was gripping onto my arms much more strongly than at the start.

The centrifugal force pulls me around.

Once again my arms tense up, and at the same time, Charlotte’s position changes due to the force.

I calm down after the momentary separation and my hands are directly touching Charl’s breasts.

It appears that we reached the end of the slide and splash down into the water.

Coming out of the surface of the water, Charl stares at me with her arms crossed over her chest as if in a guard position.

Even so, there's nothing I can do about it now.

The awkward atmosphere between us remains as we return to the entrance of the slide, Laura scolding us as she was very sick of waiting.

Charlotte and I quickly bowed our heads to her.

There was still an awkward atmosphere between me and Charlotte thanks to what just happened, so we ended up placing an odd distance between us.

“Hm? What is it? Did something happen to you two?”

Laura made a suspicious looking face, and without saying anything more she hurried me over to the slide entrance.

Holding her like this, Laura does have the small body...

Her skin is so smooth... no, this is bad, let’s hurry up and get going.

Beautiful silver hair and smooth skin, and not to mention the special touch of a woman assault my senses head on.

Anyway, I squeeze Laura in the same manner as I did Charl.

Maybe it’s just my imagination, but it looks like Laura is blushing.

Indeed, even Laura would get nervous when she is in close contact with someone of the opposite sex.

I felt weird not being sure whether or not I wanted to know such a thing.

“All right then, have a good trip!” 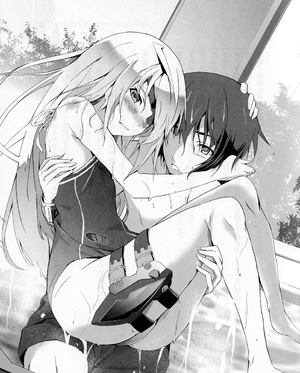 The staff lady pushes my back once again, and Laura and I started sliding down.

I close my eyes once again to the splashing water and harsh increase in speed.

After that Laura’s water soaked hair starts to hit me in the face.

This is bad, it actually kind of hurts!

To get control of her hair flying around, I embraced Laura’s small body as if to conceal her.

“You'll bite your tongue if you talk!”

I realized that we were approaching the curve where Charl and I got separated at before, so this time I squeezed Laura even tighter so it doesn’t happen again.

Oh yeah! We got through the curve! Did you see that!?

And then the final bend comes, after which Laura and I splash into the pool.

Laura and I didn’t separate upon the shock of hitting the water, so she remained in my arms.

So all I could do was princess carry Laura out of the pool.

Laura looked like a timid and well-behaved cat in my arms.

� “Something wrong? Does it hurt somewhere?”

“All right, all right already!”

“I-I didn't want that to happen! Ichika just went and did it on his own.”

Charlotte was puffing her cheeks out. I guess she is upset.

“I'll have the same as Charlotte.”

“Right! Two guava juices then. Could you get a table?”

I moved out, as if to get away from Charl staring at me.

Adding in my portion, I ordered 3 guava juices at the drink bar, and headed back to them at a slow relaxed pace.

I pray this cheers them up...

I handed the juice over to Charl, who didn’t appear to be angry.

After that, I handed the other one off to Laura and sat down.

“Yep, it's sweet but not too sweet, it’s refreshing.”

While feeling relieved from seeing Charl brighten up, I have a taste of the juice as well.

The three of us drank our juice in silence for a while.

While doing that, the PA system started up.

“Starting now, we are taking applications for participation in today’s main event: the best couple contest. The couple who takes first place will enjoy a 3 day 2 night trip of leaf viewing during the Fall.”

Charlotte and Laura stand up in unison.