Sounds of sirens echoed all around us, but the truck continued to pass through the city.

In the trailer of the truck, I frantically called Lilith.

Her face twisted in agony. There were fist-sized holes on her chest and her abdomen, the exposed tubes splattering oil all around like mad snakes.

So that I would hear her words clearer, I shifted my face closer.

She said in a hoarse voice: "Get down the car immediately after passing the busy street."

"But......" I looked at her wounds. She was unquestionably badly hurt— no, deathly hurt. On the other hand, I could not move because I lost my lower body. My system that used the three main circuits was unharmed. However, Lilith was different. The large amount of machine oil that flowed out showed evidently that her important circuits was damaged.

Even so, she still raised her upper torso. Then, she coughed out black machine oil.

"I'm okay." She used the back of her left hand to wipe away the machine oil at the corner of her mouth, smiling forcedly at me, "This is just a small matter."

In contrast with her words, black liquid flowed continuously out from her chest and her abdomen.

After the truck drove for about five minutes, we passed the center of the city, and arrived at a deserted suburban path.

Lilith hugged me. I cursed my inability to move while feeling shocked because of her hardiness.

Taking the chance when the truck decelerated, Lilith jumped down from the trailer— instead of saying jumped, it's actually more like rolled. The truck did not notice us and left just like that.

Lilith stood up unsteadily and looked around. It's fortunate that nobody was around us.

An old house was in front of Lilith. The name of the agent of the asset and the words 'For Sale' were written on the signboard.

Lilith carried me on her back again, walking towards the backyard of the house with unsteady steps. Being carried on her back, I couldn't do anything.

We passed through the entrance and walked into the yard. It was a barren land that was full of weeds.

She lied down below the eaves. As long as people don't walk into the yard, they wouldn't see us from the road.

Lilith's body couldn't hold on anymore. Probably because her posture wasn't good when she jumped down, quite a few wires and the circuits were exposed from the holes where she was shot. The tubes that were leaking currents twitched like a living creature, creating sparks all around.

"Heh heh...... This is bad......" Lilith said in a relaxed tone and touched her chest while retaining her posture. She wanted to use her hands to stuff the exposed circuits back into her body, but it was useless.

She took out a square box from the hole on her chest.

It was a card box that was stained black by the machine oil.

I opened the box according to her instructions, and a plastic card was placed in it. The familiar name of a bank was written on it.

"That's right. The password is HRM019, my certification number."

I didn't know what she wanted to say. Why is she handing the cash card to me now?

"Also, at the bottom of the card box......" Lilith quietly instructed me, "There's a paper right? Openit."

I opened the paper at the bottom of the box according to her instructions. It was a map of Oval City and a neighboring city. Only one place was circled with a pencil.

While saying that, black machine oil trickled down from the corner of her mouth.

"Remember? I mentioned it to you before this. A robot called Lightning."

Lightning— that seemed to be the name of a robot that works at a junk parts store that Lilith mentioned before this. A large robot that is similar to Volkov.

"Go there and ask him to fix you."

"Be careful when you move. You must hide immediately after that, I recommend you to hide below cars. And also—"

I uneasily interrupted her. "Wa- wait a minute. A- aren't you going as well?"

"After I reached the junk parts store, I'll ask them to come help you. So, you just wait he—"

Her tone was quite determined, but her gaze started to fade. The gleam in her eyes darkened, indicating that her battery level was getting low.

Hearing that, my chest tightened.

Lilith shook her head vigorously, liquid flowing down from her neck. "No, you can't be fixed if you don't have enough money. Definitely not."

"Lilith, wait a minute. I can't just leave you here and go."

I pleaded while gazing at her. However, Lilith shook her head and said: "Never mind, hurry up."

Abandoning Lilith and running away alone. I can't and won't do this.

I handed the card box back to her. "...... No. I definitely wouldn't want to escape alone. That's why I'm not accepting this."

"Iris Rain Umbrella!" Lilith grabbed my shoulder with her left hand, widening her eyes so much that it's scary, "Don't be so naive!"

Her angry roar made me cringe. Her ferocity swayed my whole body.

"Listen, you must live on! If only you have that card, you can be repaired! But I can't go on anymore! So only you can be fixed!"

"Have courage! You must have the courage to live on even if you're alone! This world isn't that simple! If you get weak, you'll be turned into scrap metal!"

She violently coughed out some machine oil. The black liquid splattered onto my face as well.

Even so, she still continued. 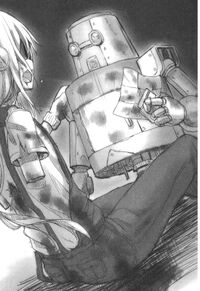 Lilith stared at me with a clouded expression. While holding her hands, I said repeatedly like a spoiled child: "No, I don't want to......"

Just like that, I refused her for quite some time.

She lifted her left hand, lightly touching my face. Her hand was stained with machine oil. "Iris. Let me tell you something......"

Lilith said as though she was educating me.

Her slender fingers touched me lovingly, while I just stared blankly as the light in her eyes gradually faded.

She looked directly at my eyes, saying in a hoarse voice.

"You're a robot that was loved up till the last second."

After saying that, power left Lilith's hand and it fell from my face.

I did not speak.

What Lilith said must be correct. Compared to myself, who doesn't know about anything, she who lived on with her own power would probably be right.

However, even so, I still have some parts that I could not agree with.

What should I do? If it were to be Professor, what would she do at these time?

I opened the cover on my chest, taking out the gray cigarette case. That was a memento keeping the group photo between Professor and I. After opening the lid, I took out the 8-shaped circlet cigarette in it.

I broke the 8-shaped cigarette in half. One circlet would be used for someone who wants to quit smoking, the other part would be used as an ashtray. After that, I pressed the two circlets together again.

"See, it'll be a 0 if there's only one, and it'll be another 0 over here. But you'll get a 8 when you combine them. Combining them would make them more powerful— that is the number 8, and they are us.

That was a view that I learnt from Professor, a casual remark by Professor in one of her special lectures. Seeing Professor's circlet cigarette, I remembered that.

Lilith stared at the cigarette in my hands, mumbling in an almost unperceivable voice: "Isn't this...... too hypocritical......" The gleam in her eyes was almost completely lost.

"Professor and I, Lilith and Volkov, and Lilith and I right now, we're just like the 8-shaped cigarettes, two of us can be combined. It wouldn't do there isn't two. So, Lilith—"

My electronic voice sounded rather like my original voice at this moment.

"I'll definitely save you."

Lilith did not speak.

She just blinked and closed her eyes.

At this moment, her battery finally finished.