When I came to my senses, I was thrown onto the cold asphalt road.

It was pouring. No, it's just because the condition of my vision is terrible.

The truck is at the right side of my field of vision. The truck that had turned over, wheels spinning meaninglessly, and the fiercely burning trailer. In the darkness, the burning flames dyed the night sky white.

I searched in my memories.

Countless sharp lasers were released from the armored cars of the police, my vision turned white— so that's why— I was shot by a laser gun.

I finally understood what had happened.

"Lilith!" I frantically called the name of my friend, "Lilith! Where are you!"

I supported myself on the road with my two hands, getting up and observed the surroundings. The 'rain' was still terrible, but my visual settings seemed to be okay. In the black and white vision, I tried to search for Lilith's silhouette.

Below the railings at quite a distance from the overturned truck, I saw a silhouette. The long hair was spread on the ground like a fan.

I frantically shouted. However, Lilith lied weakly on the ground, motionless.

—Wait for me, Lilith. I'll go save you right now.

I avoided the debris from the truck scattered all around, approaching Lilith by turning my continuous track.

Before I reached her side, Lilith made a pained moan, and regained her consciousness. She slowly lifted her upper body, looked around and met my gaze.

After she said that, Lilith turned her gaze to the truck.

A rough shout suddenly rang, then Lilith was kicked in the back, bumping roughly with the road surface.

"Ahhh......!" After ascertaining her assailant, my body froze because of fear.

The person who kicked Lilith had an odd, metal helmet on him, and was equipped with armor, holding a laser gun that was giving off gray light in his hands as well.

Memories replayed in my mind like a slide show. The news in the afternoon, the fountain plaza, the robot that went on a rampage, the blue lasers, the special unit, and—

One of them raised the head of the robot like a trophy.

"Don't move, this is an order!" The steel head said in a cold voice, "Place your hands at the back of your head!"

"You bastard......!" Lilith immediately retailiated. Her body sprang upwards like a whip, her back of her head ramming into the head of the man pressing her down. The man moaned, covering his face.

While being shocked at Lilith's audacious actions to the police, I extended my right hand. Lilith extended her right hand to me as well.

At that instant, a light ray assaulted her.

Lilith's right arm suddenly fell onto the ground in front of me.

She shouted in a high-pitched, screeching voice, and sat down on the ground weakly. Black machine oil poured out of the cut arm, even splattering myself. The man wearing heavy armor immediately rushed to Lilith's side, pointing at her with a laser gun.

"Being energetic sure is nice, missy!" The man who was hammered in the head by Lilith roughly grabbed her hair and pulled her up. Lilith moaned, her face twisted in pain.

Light engulfed her once more.

Lilith's left ear and left face was completely burnt. She gave a scream even more piercing than just now, collapsing on the road. While pressing on her left side of her face, Lilith convulsed in pain on the ground. Seeing this scene, the man started to laugh.

I shouted with all my might, but a man immediately silenced me, kicking me aside.

"Let's just tear them apart so that it'll be easier to move them." "Yeah." While conversing, they pointed their laser guns at Lilith's head. Her face was full of terror when the men placed their fingers on the trigger. Seeing this scene, my body started to tremble slightly.

Ahhh, Lilith is dying, she's going to get killed. No, no, I definitely, absolutely, won't let this happen—!

Unknowingly, I rushed towards the men while shouting.

"What?" The man lost his balance soon. I frantically grabbed his legs. "Let go of me!" The man impatiently tried to fling me away, but I definitely wouldn't let go so easily.

"Lilith, run away!" I answered loudly while being kicked by the man.

However, my resistance ended there.

My body was assaulted by 'something hot'. When I thought 'Ah......', I was collapsed on the surface on the road, looking at fragments of my continuous track descending from the sky.

"Uuu......" I moaned in a hoarse voice, looking at my lower body slowly. My lower torso was hit, and completely vanished. The parts below my waist was burnt, a few tubes poking out of it like innards, with sparks flying all around.

"Stop!" Lilith shouted in despair, "At least let her go!"

However, the men answered her pleadings with violence. The muzzle of the laser gun was roughly stuffed into Lilith's mouth, and a choking sound came from her throat.

I frantically taised my body, but I couldn't do anything after being bathed in rays of lasers. I almost couldn't even make a noise.

I shouted in my heart, then used all my effort to shout out loud.

Was my voice heard? 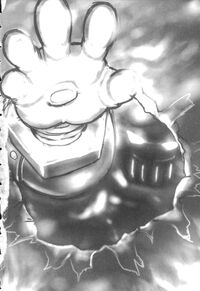 I heard a sound. A powerful roar like the howling of an animal.

The men looked at each other, asking: "What was that?"

After that, "UUAAAAAARRRRRGGGGHH!!" the rough roar clearly tore the night apart. The men turned over to look at the direction where the sound came from. In their field of views, there was a large, burning truck.

After that, a large arm surrounded flames—

was extended from the truck.