In the monochrome world where the sky and the earth looks unpleasant, I'm continuing my labor today as well. Endlessly walking back and forth in the never-ending rain.

Lilith would come by my side sometimes, and would leave after talking for awhile.

Basically, Volkov and I can talk to each other now. Every time I lightly tap his large body, asking 'Anyone inside?', he would turn his head around, giving an odd answer 'Oh~ There is, there is'.

At night, we would start the long-anticipated meeting of the night time book club. After I started reading for two weeks, we speedily reached the sixth volume of 'Third-Rate Demon God Visa Darke'. There are eight volumes in the series, so we're already at the last part of the story. To summarize the story from volume one to volume five, most of them are like 'Demon God Darke would sneak out of the castle every time, bringing back a magical tool'→ 'Get scolded by magical ring Flo Snow' → 'The magical tool is actually really powerful......'. The conversations between the black shirted demon god and the serious silver ring in each volume are very interesting, not only Lilith and Volkov, even I'm addicted to the story as well.

However, the style of the sixth volume differs from the previous volumes. Darke left Flo, and went on a journey himself, losing contact from each other for a month. After time passed, Flo, who was rather angry at the start, started to worry, and realized her 'true feelings'. She, who always told Darke off, actually— just like that, the relationship between the two started to develop.

About this matter, it's better if I don't think so much about it.

After two at late night.

In the warehouse shrouded in darkness, the charging lights of the robots flickered like fireflies. A corner of the warehouse was shone on by the moonlight, and that's the place where we have our small party.

Lilith used her fingers to lightly tap on my elbow. If we reach a part where she cares about, she would immediately ask me to reread it.

"Flo thought. Until now, did she really help Darke."

Lilith tilted her head while hugging her knees, it seems that she felt uneasy about this part.

In this part of the story, the magical ring Flo Snow seemed to be quite troubled recently.

She was quite confident in her ability to educate as she started to serve the Darke family from last generation. Though Darke would say harsh words, he would still listen to Flo's advice in the end, so it didn't trouble her. Even I, who's reading the book, has the feeling that 'Ahh~ Their thoughts are really connected'.

However, Darke left Flo, not even sending messages to her for the month that he's absent. Such a thing never happened in the past. Flo felt uneasy now that she's alone, and kept thinking to herself the whole day. Darke kept trying his best as a demon god up till now, but is she just a fussy and troublesome presence to him? Also, she knows that her 'true feelings'— her love for Darke would definitely trouble him, so this made her troubled.

"How should I say this, she worries too much. Since she'd been together with Darke for such a long time, she should be more confident in herself."

Lilith defended the stand of the troubled ring. I feel the same as well.

Unusually, Lilith was at a loss of words. Though Darke is random and childish, he's actually kind and honest. Thus, there must be a reason that he couldn't come back immediately.

Lilith poked my elbow. I raised the book and said: "Then let us continue."

The book slid down from my hands like a living creature.

Lilith picked up the book.

While apologizing, I took the book. The 'rain' became more and more serious recently, so getting a grasp of distance is rather hard for me.

"Flo thought. Did she really help Dark up till now. Then, she started to think again."

In the rain, my gaze moved with the words. The white lines that were like the clouds appearing from the end of a jet formed on top of the words.

"If she couldn't help Darke, how would she continue to live."

Then, I closed the book.

Lilith stared at my face in surprise.

I expressed my own feelings.

"The sentence just now, don't you care about it?"

Flo Snow's thoughts are exactly what I was pondering about after I came to the construction site.

—If I cannot help, how can I continue to live?

Working everyday without rest, turning off my power source when night comes, waking up in the morning. And the process repeats every day. Is there any meaning to living like this? I, who could not help Professor, does my existence still have any value?

My questions combined with Flo Snow's worries that she could not help the demon god.

Thus, I asked my question.

The first person who answered was Lilith.

She uneasily tilted her head.

I continued my question.

"Sorry, I have absolutely no idea about what you said."

I tried to explain, while Lilith said 'Ah...... So that's what you meant'. She seemed to have understood the meaning of my question just now.

I anticipated her answer.

"Things like meaning of existence are questions that only idlers would think about."

"To be exact, only robots that have great lives would think about this. ...... Poor robots like us don't need a meaning for existence. As long as our battery content and parts haven't broken down completely, even though the day that we would become scrap metal would come, isn't that the meaning of our existence?"

She said in a logical tone.

"Which means, living is 'a struggle to the finish'."

Lilith said in a rough tone. Her words had some power in it.

At that moment, Volkov interrupted lightly: "I- think- that's- wrong."

"Mnn?" Lilith raised one of her brows, then turned over to face Volkove, "Hey, I'll say, you dare to have opinions that differ from I, Lilith Sunlight?"

However, Volkov really doesn't know how to joke. He answered seriously: "Volkov- have- opinions."

His square eyes faced me.

After hearing Volkov's explanation, I was delighted. Because Volkov deciphered the meaning of my question.

"That's right, that's right! What Volkov said what exactly what I meant! The meaning of our existence would mean 'why do we live'!"

"Volkov, what do you think? The meaning of our existence. Why do we continue to live?"

I asked quickly, while he answered slowly after hesitating for awhile.

Then, he unusually continued to speak.

I saw that a sorrow shone in his eyes.

After saying that, he sank into a silence."

Silence came upon the warehouse. 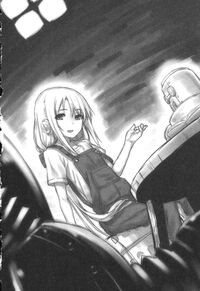 Lilith's gaze towards Volkov was rather gentle. She would look at Volkov with that expression occasionally.

She glanced at the windows of the warehouse.

"Even humans would have trouble answering that."